This season I’ve been closely watching which of my perennials and grasses is handling the drought with more ease. I’m curious about why one part of my Joe pye weed, a 10-year-old plant that has been in the same spot, barely bloomed, turned brown and withered, but another section had larger blooms and green foliage. 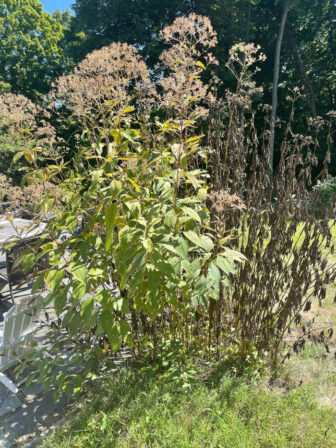 During the drought, this Joe pye weed withered and died in one section while another section bloomed. (Photo by P. Doan)

Joe pye wouldn’t typically thrive in the spot where I planted it, with full sun and dry soil. It likes moisture and a few hours less sun. But it’s done well all these years because I planted it directly in line with a downspout. In a season with consistent precipitation, it’s almost a rain-garden effect. The plant soaks up the rainwater that flows toward it, giving the water more time to filter into the soil. This year’s drought unbalanced the relationship, though, and it’s suffering.

In botany, the word ecotype is a sign of how a native plant is, well, more native than another. It means that the plant has adapted and evolved to the hyperlocal growing conditions. If your seed was collected in Cold Spring, it conceivably has characteristics that help it thrive here.

When it comes to vegetables, by collecting seeds, gardeners can choose plants for taste, hardiness and other characteristics. Even if your tomatoes are all the same variety, only preserve seeds from the strongest plants. When you sow them in another season, you’re influencing its genetic makeup.

It’s important to know your seed types to collect and propagate. Stick to open-pollinated plants and straight species. Open-pollinated plants will grow true to type and bear the parent plant’s characteristics. This is reproduction, don’t forget. A hybrid plant has two parents. For example, the Summer Sun ox-eye sunflower (Heliopsis helianthoides, var. scabra Sommersone) is shorter than the straight species, more compact and has an orange disk instead of yellow.

If I collected seeds from Summer Sun, it might have orange disks or it might have yellow, it might be taller or shorter, or it might have characteristics different from either of the parents. That’s a fun experiment as long as I don’t mind a surprise, but it’s a waste of garden space if it’s a zucchini hybrid. The resulting plant from saving seeds of a hybrid vegetable can be inedible.

I once tested this and let a squash plant grow in the compost pile. The fruit was yellow and oblong and full of seeds. Even the hens weren’t thrilled with it.

Some perennial seeds can be saved by drying and storing them in an envelope. The Wild Seed Project (wildseedproject.net) is a useful resource for instruction on preserving and germinating native plants and grasses. Or skip all those steps and order seed from the project, which is a nonprofit based in Maine.

Vegetable seeds are trickier and the process depends on the plant. Tomatoes do well after fermenting by sitting on the counter for a few days. Growers recommend taking seeds from tomatoes on different plants and combining them. After the seeds are dry, they can be stored in an envelope or in the refrigerator or freezer. Just don’t try to sow frozen seeds.