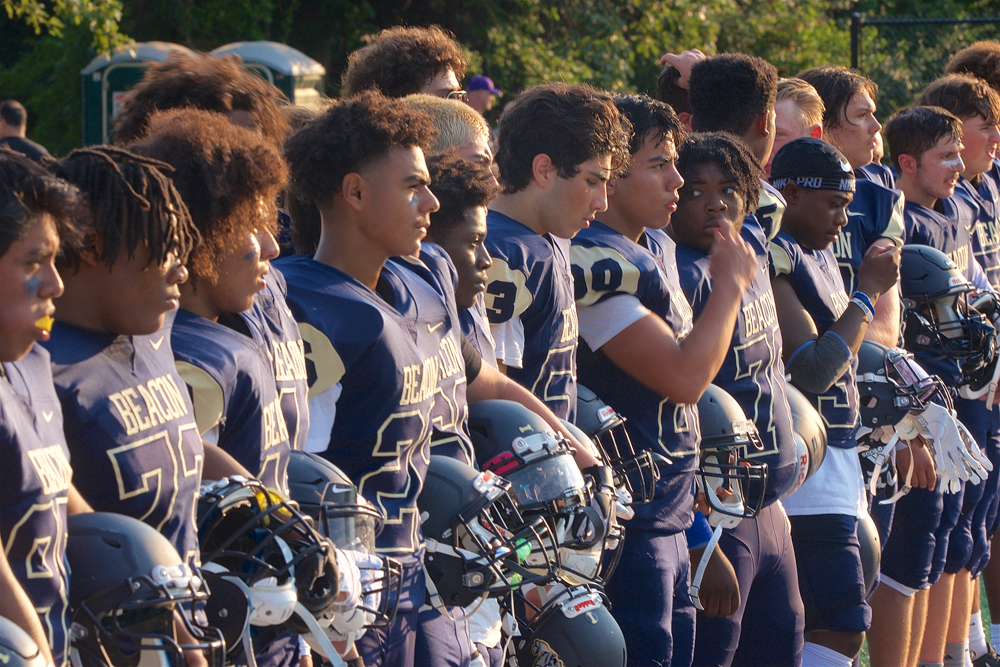 The Bulldogs had a solid second half in a 34-21 loss. (Photos by S. Pearlman)

It looked like the season opener on Sept. 9 for Beacon against Warwick was going to be a one-sided affair, with the Wildcats scoring on the opening kickoff and building a 27-0 lead by halftime.

But the Bulldogs came back with some fight in the second half, putting two touchdowns on the board in the third and another in the fourth in the 34-21 loss.

“In the first half it felt like they had some experience on us, with them playing a game already,” said Coach Jim Phelan. “The guys seemed a little nervous, a little antsy. But we got better as the game went on. Joey Vallaro, in his first high school game, had an interception and 52 yards receiving, so there were some promising signs. The guys stayed together.”

Quarterback Danny Urbanak put the Bulldogs on the board in the third quarter with a 6-yard run and later connected with Aaron Pegues for a 3-yard TD pass. Leibenson Perez-Novas scored on a 4-yard run in the fourth.

Urbanak completed 5 of 16 attempts for 91 yards and had one interception. Ryan Wandji ran for 37 yards on seven carries. Alex Khalil and Owen Lynch made key contributions on defense, Phelan said.

Haldane shook off an early 14-0 deficit on Sept. 10 in its season opener, responding with three unanswered scores for a 21-14 road win at Irvington.

The home team got off to a fast start in the first quarter, scooping a Blue Devils fumble and taking it 44 yards for a touchdown, then scoring again on a 5-yard run.

Soon after, Thomas Tucker picked up a fumble and returned it 76 yards for a score, and Haldane added a two-point conversion on a Tucker run to make it 15-14.

The Blue Devils increased the lead to 21-14 in the third quarter on a 2-yard run by Evan Giachinta, although a 2-point conversion failed.

“I thought a big factor was our sense of resiliency,” said Coach Ryan McConville. “We started out slow, but we settled down, started to gel and got some momentum on offense. That first score calmed us a bit, and we played better from there.”

Giachinta finished with 123 yards on 25 carries. Van Tassel completed only 2 of 6 pass attempts for 18 yards but ran for 101 yards on 12 carries.

“Defensively, Erik Stubblefield has been a key cog in the middle of our defense,” McConville said. “Chris Moore made his first varsity start, Luca Dilello came in and had a nice 18-yard catch and Tyler Hyatt, Julian Schwartz and Arthur Owens all did a nice job.”

Haldane (1-0) will host Albertus Magnus at 1:30 p.m. on Saturday (Sept. 17) in the Future Blue Devils game, during which players in grades K-6 can run onto the field with the varsity. Children are invited to join the team at 1:20 p.m. in the south end zone.

Beacon battled Kingston to a scoreless tie on Sept. 10 after two overtimes despite dominating the game with 17 shots on goal to Kingston’s zero. The Bulldogs responded Wednesday (Sept. 14) at home with a 9-0 shutout over Middletown.

“Against Kingston we had a tough night — we were not finishing and had tons of opportunities,” said Coach Mike Lentini. “We just couldn’t put one away.”

Haldane took an 8-1 loss to Briarcliff on Tuesday (Sept. 13), with Anna Cat Nelson scoring for the Blue Devils. Ruby Poses had 15 saves in goal.

The Blue Devils (1-3) are scheduled to travel to Woodlands on Saturday and host Poughkeepsie at 4:30 p.m. on Monday.

Haldane will travel to Westlake and Putnam Valley next week.

Beacon suffered a 2-1 loss at Newburgh on Tuesday (Sept. 13), with Andre Alzate scoring the Bulldogs’ goal, assisted by Jack Philipbar.

“We were a bit undermanned, due to some illness and a suspension, which gave us a short bench,” said Coach Craig Seaman. “We need to continue to develop and mature to string together a consistent effort over 80 minutes.”

Beacon is scheduled to host Kingston at 4:30 p.m. on Monday and travel to Goshen on Wednesday. 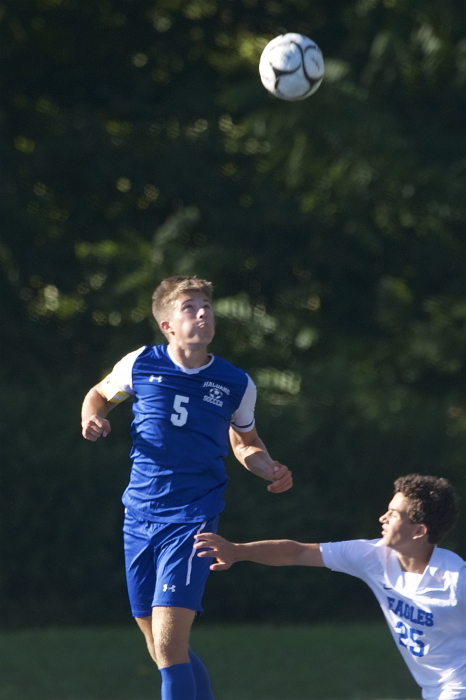 Haldane dropped a 3-2 decision to Hastings on Sept. 9 before defeating Poughkeepsie, 5-1, and Putnam Valley, 3-1, this week.

Against Putnam Valley, Clement Grossman scored twice and had an assist and Ryan Eng-Wong added a goal. Ronan Kiter had two saves in net.

Eng-Wong scored twice against Poughkeepsie, with additional goals from Grossman, Brandt Robbins and Matt Nachamkin. Against Hastings, Eng-Wong and Emil Schweizer had goals and Max Westphal had an assist.

Despite the loss, Haldane is off to a strong start at 4-1. The Blue Devils will visit Pawling today (Sept. 16) and host Tuckahoe at 4:30 p.m. on Tuesday.

“That was a good performance on a sloppy course,” said Coach Jim Henry. “We were happy to come out with a victory, but even happier to have no spills or injuries.”

Beacon will be at the Suffern Invitational at Bear Mountain on Saturday (Sept. 17).