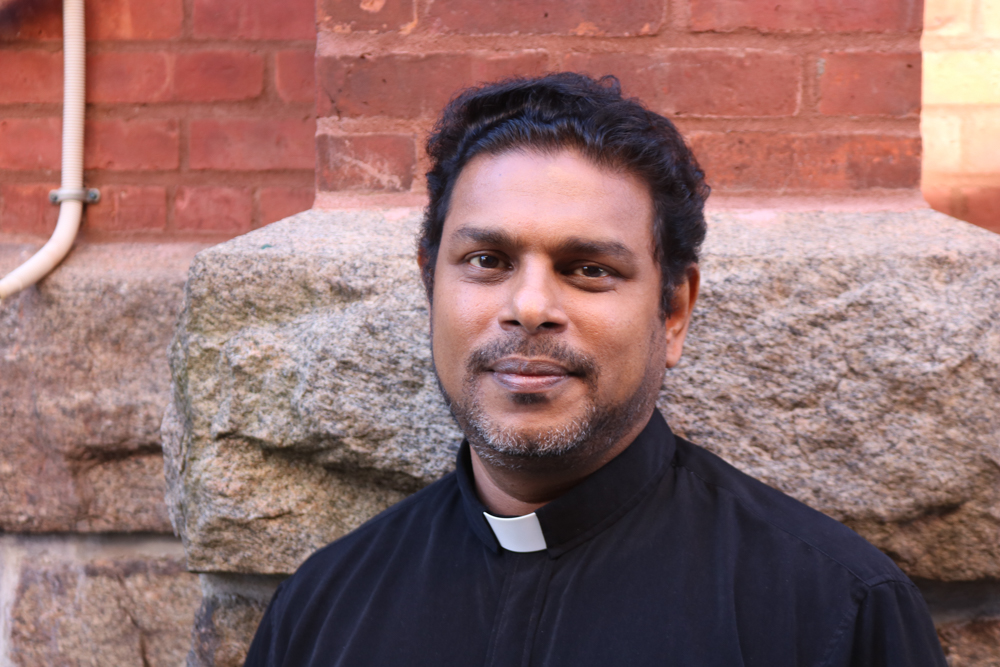 Father Suranga Gunasekera, 43, is serving as the parochial vicar at Our Lady of Loretto in Cold Spring while on sabbatical from his native Sri Lanka.

What was it like growing up in Sri Lanka?

I grew up in an urban area near Colombo. I played sports — cricket at first, which isn’t very famous here in the U.S. In college, and as a seminarian, I played basketball. Sri Lanka is known as “the pearl of the Indian Ocean.” If you travel about an hour from the coast, the tropical weather changes, and it becomes cool. And thank God we don’t have earthquakes, volcanoes or hurricanes. There is diversity in its nature and geography: mountains, flatlands, coastal areas, greenery everywhere, but no desert sands. And lots of wildlife. People go there to see the biggest mammal on land and the biggest in the sea — the elephant and the whale. In that way we are rich.

What is the religious makeup?

Buddhists are the majority, about 70 percent of the population, and Hindus make up 14 percent. Buddhism promotes humility, acceptance and tolerance, the basic teachings of Buddha. Catholics make up about 80 percent of the Christian population and 6 percent of the total population. There are also Muslims. People are sometimes surprised when they arrive. They ask, “Why are the Muslims so peaceful in this country?” But even in Christianity you can have people with extremist ideas.

Are the challenges for the church different from those in the U.S.?

Every country has different problems to solve. We cater to the needs of the people, through our education ministry, social justice and our work with poor people. The children’s apostolate is important. We also have institutions of higher learning. We have not had the problem of shrinking congregations. God has blessed us with priests and religious nuns. Many influential figures have come from Catholic schools. So, though we are the minority, we have had a big impact on the country.

Is the Catholic Church more liberal or conservative than here?

Your understanding of a liberal church is quite different from ours. We have the freedom to express our views and theological insights. We don’t have strict boundaries when dealing with other religions. But we are not liberal in the way you understand here. We are conservative in the good sense of the word. You have to be in certain matters, to have a way to hold things together, like the string on a kite. You don’t simply cut the kite string; you need control over it. Liberal and conservative are extremes. Extremes never take you to the end. You should have a balanced view on everything. That’s something we get from Buddhism. They speak about the importance of the middle, a balanced attitude and perspective.

Will we see the day when Catholic priests can marry?

A priest who is a member of a religious order cannot marry. As a religious priest [Oblate] I’ve taken vows of poverty, chastity and obedience. It’s a way of life. Even if the pope allows priests to marry, I can’t. But diocesan priests, those who belong to the diocese, can have that option. I have friends in the U.S. who married in the Anglican Church, became Catholic and then became priests. It is not something alarming. Maybe, at my age, I will see this happen. But the whole structure would have to change. For example, Anglican priests are married, have a family and children. Eventually, somebody might demand that kind of married priesthood, for many practical reasons.