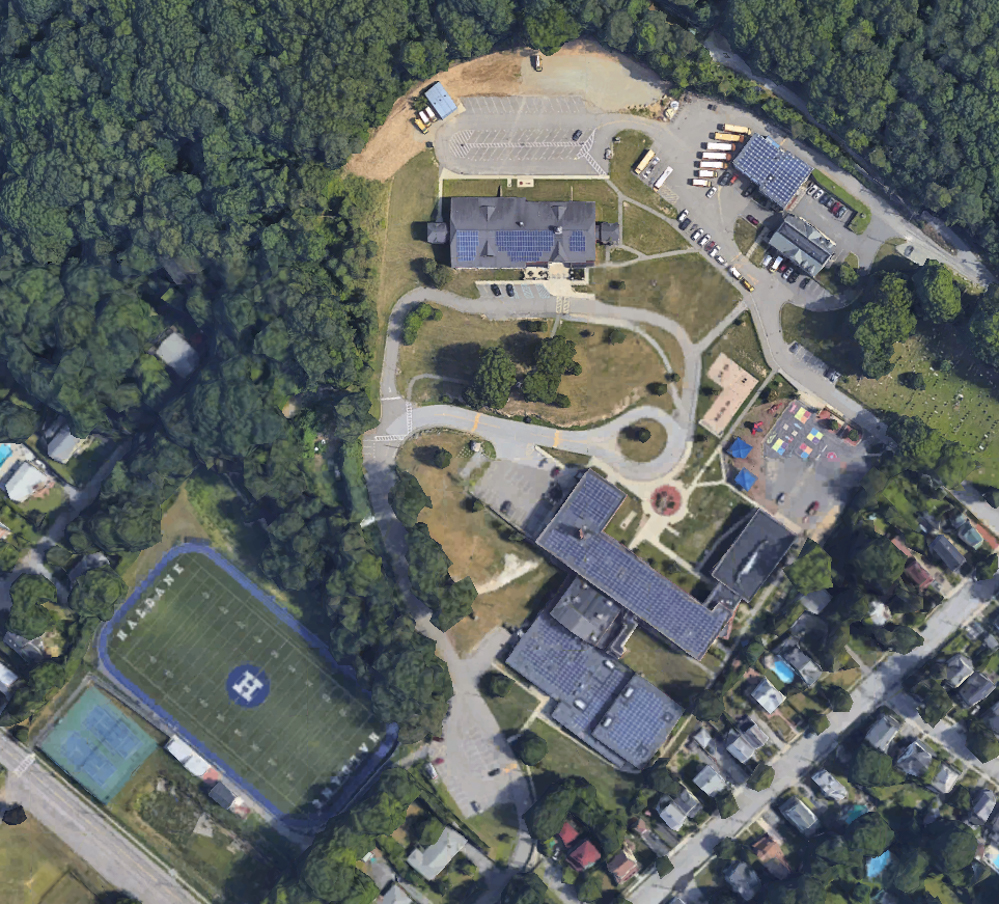 The Haldane campus, seen from space: The high school is at top center, and the elementary and middle schools at bottom center. (Photo via Google Earth)

What capital improvements does Haldane need to improve the student experience and be competitive with nearby schools? That was the question being asked at the Tuesday (Sept. 20) meeting of the school board.

For example, should the district build a performing arts auditorium? Haldane is one of the few schools in the area without a dedicated space, the board was told by representatives from CSArch, a Newburgh architecture firm it hired to prepare a campus master plan.

Or should it build a center with a cafeteria and space for students to socialize and collaborate?

Or how about faculty bathrooms?

And where can they put these buildings without conflict with residents whose homes border the Cold Spring campus?

The master plan will not be complete until December or January and no spending estimates have been prepared, according to CSArch. The district is a long way from committing to anything, said Superintendent Philip Benante, but the process, which began in June, has highlighted campus needs.

Here are the capital-improvement priorities identified so far by consultants preparing a master campus plan for the Haldane school district:

“The space that we have available to our kids is significantly less than that available to other kids in other schools,” Benante said. “It’s important that we examine that.”

Indeed, the presentation, delivered by Tom Ritzenthaler and Melissa Renkawitz of CSArch, drew a contrast between Haldane’s facilities and those at 11 nearby districts, including Millbrook, Spackenkill, Rhinebeck and Putnam Valley.

As an example, they said, Haldane ranked last in square feet per student with 148, compared to an average of 205 at the other campuses. And Haldane was the only campus without an auditorium. (The district uses a gymnasium stage for performances, setting up folding chairs for spectators.)

“This constrained space asks a lot of our staff,” said Peggy Clements, the board vice president.

As part of the presentation, Ritzenthaler and Renkawitz identified sites on campus for buildings as well as design ideas for an auditorium, gym and student center.