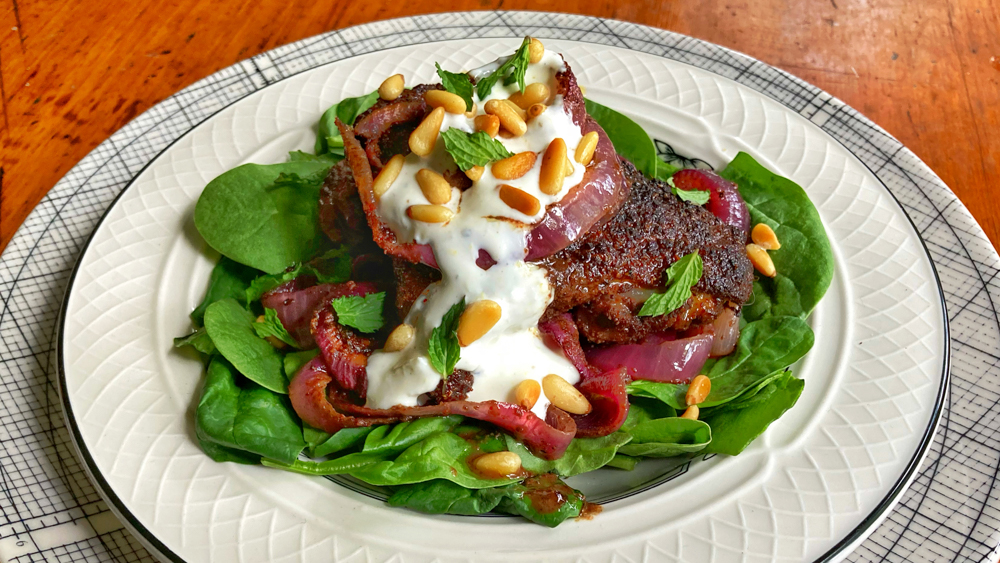 For such a common plant and spice, sumac carries a complicated reputation.

A widespread genus of flowering plants, sumac grows freely in Southern Europe, Asia, Africa, North America and Australia, and is the source of the culinary sumac, a coarse, deep-red powder ground from the dried, bright-red berries of the plant. (To ease your mind, poison sumac, although a member of the same genus, is common primarily to North America and is distinguishable by its white berries.)

The lion’s share of the ground spice is produced from Asian, African and Sicilian varieties, and its use is most closely associated with Middle Eastern cuisine and the cooking of the Levant. It is an ingredient in the spice blend za’atar and often used as a finishing spice, dusted over meats, seafood, salads, hummus, baba ghanoush, yogurt or even desserts, to add a pronounced lemony tartness without the additional liquid of a squeeze of citrus.

Sumac’s tartness is actually more closely related to the tannic tartness of sour apples or vinegar and is a common additive to commercial “salt and vinegar” concoctions such as potato chips.

One recipe where sumac is allowed to star is the Palestinian national dish musakhan (or muhammar — “reddish” in Aramaic), a slow-cooked meal of chicken roasted with onions and a blend of sumac, cumin, allspice and saffron, served over taboon (a tandoor-baked bread), garnished with pine nuts or almonds.

The recipe here is adapted for a sheet-pan meal: The spiced chicken is roasted atop a nest of sliced (and spiced) onions. For the spice blend, I’ve scotched the traditional saffron in favor of cinnamon and optional Aleppo pepper.

Rather that serving it with taboon or another flatbread, I opted for a bed of spinach, always looking for an opportunity to increase our leafy green intake. The heat of the chicken, onion and warm juices also serves to wilt the spinach or greens and marry the flavors. The optional lemon-yogurt sauce leavens the smokiness of the sumac and cumin (and Aleppo pepper); a garnish of chopped mint adds an herbal note (or dill as a substitute). Toasted pine nuts are a given in the equation.

You might also try this spice blend and presentation as the basis for vegetarian variations: Substitute sliced eggplant, fennel or large cauliflower florets or cutlets tossed with olive oil and the spices for the chicken, adjusting the roasting time accordingly (30 to 35 minutes). Add the vegetables to the basic chicken recipe if you like. Consider a seafood variation featuring shrimp, or carnivorous alternatives featuring lamb or pork medallions.

Regardless of the setting, sumac takes the lead and deserves the accolades on its own.

1. Make spice mix: Combine all ingredients and mix well. Rinse and pat dry the chicken. In a bowl, oil chicken with a tablespoon of olive oil and toss with 3 to 4 tablespoons of the spice mix to coat; cover and refrigerate for at least an hour (up to 8). If using, make the yogurt sauce by whisking together all the ingredients; cover and refrigerate until serving. Toast the pine nuts and reserve.

2. When ready to cook, remove chicken from refrigerator and bring to room temperature. Preheat oven to 400 degrees. Remove chicken pieces from the spice mix, shaking off excess, and reserve to a plate. In a separate bowl toss the onion rings with a tablespoon of olive oil to moisten and toss in the bowl with the remaining spice mix.

3. Line and oil a half-sheet pan. Pile the onions on first in a tight layer large enough to make a bed for the chicken. Top with the chicken, skin side up; drizzle with a bit more olive oil and roast in the preheated oven for 35 to 45 minutes, checking for doneness in the last 10 minutes.

4. Serve on a bed of spinach or greens, layering first the onions, then the chicken and some of the pan juices. Top with a dollop of the yogurt sauce and garnish with plenty of mint and pine nuts. An extra drizzle of olive oil would not be out of place.

* Bone-in, skin-on chicken thighs are my preferred cut of meat for this recipe; you can certainly use boneless, skinless thighs or other cuts, although chicken breasts may be a bit drier. Cooking times will vary so check more often.

** Ground sumac is more available than it used to be but you can find it at Nature’s Pantry in Fishkill or at Spice Revolution in Cold Spring.

*** Labneh is a culinary cousin of yogurt and is notably thicker and creamier. It is available at Nature’s Pantry and other health food stores and select supermarkets.