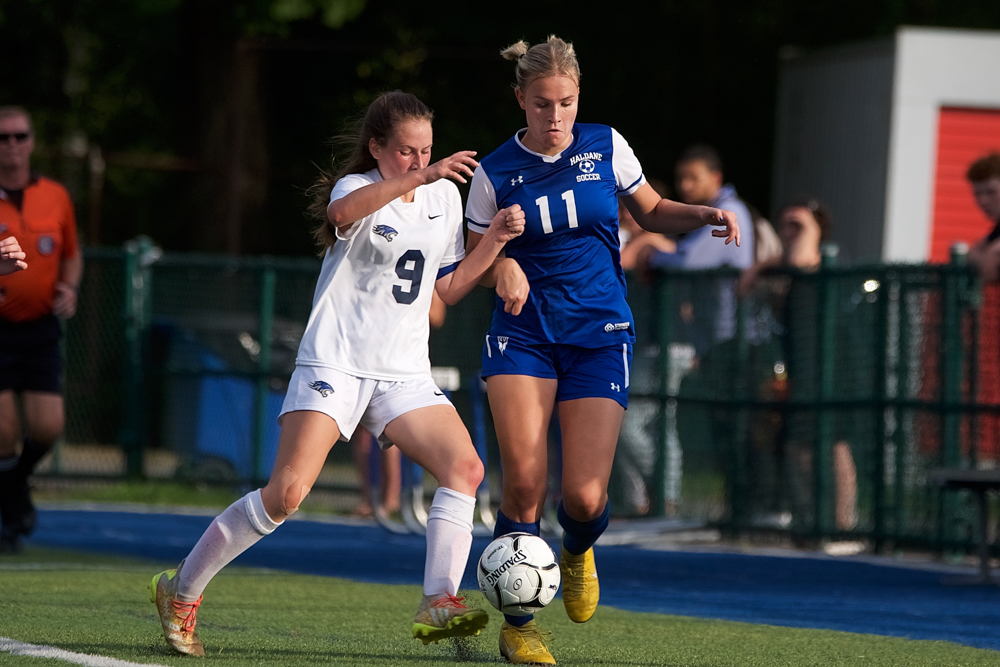 Chloe Rowe (11) held off a defender Wednesday in a win over Putnam Valley. (Photos by S. Pearlman)

Haldane shook off an early 1-0 deficit and tied the game twice before punching in what turned out to be the game-winner early in the second half of a 3-2 league victory over Putnam Valley on Wednesday (Sept. 21) in Cold Spring.

After the Tigers took an early 1-0 lead, Finola Kiter evened the score. Putnam Valley again went up, 2-1, but Kiter responded with 12 minutes left in the half, covering a loose ball at the goal and guiding it past the keeper.

Ten minutes into the second half, Haldane was buzzing around in the Tigers’ box, waiting for an opportunity, when Anna-Cat Nelson sent a perfect chip shot over the defense and just under the crossbar. 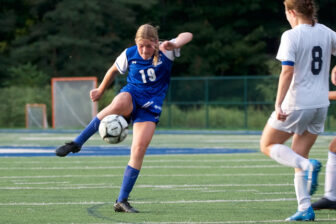 Anna-Cat Nelson (19) chipped in the winning goal just under the crossbar.

Keeper Ruby Poses had 15 saves for the Blue Devils.

“We played with tremendous effort,” said Coach Ed Crowe. “We have the mentality that if we go down one, we still play hard. We played the through-ball, worked the ball back, connected our passes and we got excellent goalie play from Ruby. She kept us in it. 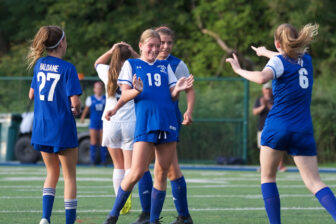 Finola Kiter (6), who scored the team’s first two goals, celebrate’s with Anna-Cat Nelson (19) after her go-ahead score in the second half Wednesday at Haldane.

“Chloe Rowe, Marisa Peters, Sara Ferreira and Finola all played really well,” the coach added. “Josie Foley-Hedlund also did a nice job. The girls have been coming along well, getting better every day. Today’s win showed me we have a lot of tenacity; we don’t let things bring us down.” 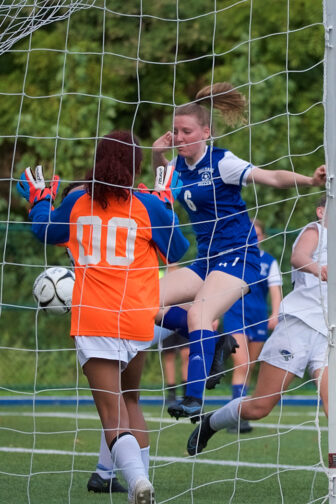 Nelson, a freshman who is Haldane’s second-leading scorer, went down with two minutes to play with a knee injury that required an ambulance. “Losing her would certainly have a big impact,” said Crowe.

Haldane also defeated Woodlands, 7-1, on Sept. 17. Kiter recorded a hat trick and Nelson, Rowe, Ashley Sousa and Stella Gretina each had a goal.

Beacon (3-2-1) defeated Port Jervis, 7-0, on Sept. 16 and fell at home, 3-1, to Goshen on Sept. 20. The Bulldogs were scheduled to host Minisink Valley on Thursday (Sept. 22) before traveling to Lourdes and Monticello next week.

There were good moments but also others that Haldane would rather soon forget during its home opener on Sept. 17 against Albertus Magnus. But at the bottom of the dogpile, the Blue Devils managed to scratch out a come-from-behind, 12-9 win over the Falcons that helped them start their season at 2-0 for the first time since 2017. 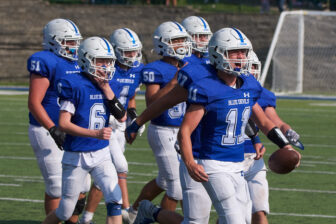 A happy Blue Devils team came off the field 2-0 for the first time in five years on Sept. 17 after beating Albertus Magnus.

Late in the game, Haldane had the ball and a 12-7 lead when the offense started moving the wrong way. The Blue Devils eventually were pushed back to their own 5-yard-line, where they faced a fourth and 27 with under two minutes to play.

Haldane took a strategic safety, giving the Tigers two points but giving the Blue Devils a free kick from the 20-yard line that took a home bounce.

“I thought as a team the guys found a way to make plays,” said Coach Ryan McConville. “Our assistant coaches came up with the idea for the safety, and that was our best option.”

The Blue Devils opened the scoring in the first quarter with a 20-yard pass from quarterback Ryan Van Tassel to Thomas Tucker. Albertus Magnus returned a punt for a TD in the second quarter and kicked the point-after to take a 7-6 lead, but Haldane got another Van Tassel-to-Tucker score, this time for 26 yards. The two-point conversion failed, and the Blue Devils led 12-7 at halftime.

Haldane had another chance to score in the third quarter but the Magnus defense held for a goal-line stand. 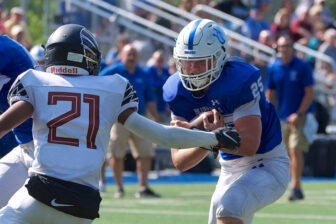 Evan Giachinta ran for 101 yards on 15 carries against Magnus.

Van Tassel completed 9 of 18 attempts in the air for 103 yards and ran for 44 yards. Evan Giachinta had 15 carries for 101 yards and two receptions for 35 yards. Tucker finished with four receptions for 59 yards and on defense had an interception.

“Our offense got on track with the passing game,” he added. “Ryan had two big touchdown passes — that was a big area of improvement. Our offensive line did a great job — our guys up front gave us time to throw the football.”

On defense, the Bulldogs were led by Leibinson Perez-Novas (10 tackles), Danny Urbanak (5 tackles, an interception and fumble recovery), Aaron Pegues (3 tackles and a quarterback sack), Cash Jackson (2 tackles), Owen Lynch (7 tackles), Jayden Quintana (a sack and a forced fumble) and Alex Khalil (5 tackles and a sack).

“I’m proud of how our guys fought to the end and forced overtime,” said Coach Jim Phelan. “Unfortunately, at the end of the game, our mistakes caught up with us, and we were beaten by a team that wanted it more.”

Beacon travels to Monroe-Woodbury (1-2) on Saturday.

Haldane (1-4) is scheduled to play in a tournament on Saturday (Sept. 24) at John Jay Cross River.

Beacon fell to Chester, 3-2, and Minisink Valley, 3-0, but defeated Seward, 3-0, to improve to 4-3. The Bulldogs travel to Cornwall Central today (Sept. 23) and Goshen on Wednesday.

Beacon ran against Goshen Tuesday (Sept. 20) at home for Section IX’s equivalent of a league championship. The Bulldogs lost by six points (29-23), placing them second in the four-team division ahead of Monticello and Port Jervis.

Henry Reinke finished third overall in 15:20; Jack Twining was fourth; and August Wright was sixth. Rachel Thorne was second in the girls’ race.

“Section IX is considerably deeper in talent this year,” said Coach Jim Henry. “We’ll have our work cut out for us over the next six weeks as we attempt to get athletes in position to qualify for states.”

Beacon will compete at the Bowdoin XC Classic on Saturday (Sept. 24) in Wappingers Falls among a field of runners from about 50 schools.

Against Tuckahoe, Luca van Dommele scored a pair of goals and Trajan McCarthy, Clem Grossman and Sam Vargas each added one. Grossman had three assists and Matt Silhavy and Max Westphal each had one. Ronan Kiter had two saves in net.

Grossman led the Blue Devils with two goals against Pawling, and Ryan Eng-Wong and van Dommele also found the back of the net. Grossman, Silhavy and Aidan Sullivan-Hoch each had an assist, and Kiter had three saves.

Haldane, which last week was ranked No. 6 in the state among Class C schools by the New York State Sportswriters Association, travels to Franklin Roosevelt in Hyde Park today (Sept. 23) and to Croton-Harmon on Wednesday.

Beacon (2-2-1) defeated Kingston at home, 5-1, on Sept. 19 and two days later played Goshen to a scoreless tie. The team will travel to Minisink Valley today, host Monticello at 4:15 p.m. on Tuesday and visit Cornwall Central on Thursday.

A reception is scheduled for Oct. 16 at the Highlands Country Club in Garrison. RSVP at haldaneschool.org/athletics.

The Beacon boys’ team will host a weekly clinic for boys and girls in kindergarten through sixth grade beginning Oct. 1.

It will take place in the high school gymnasium on five consecutive Saturdays from 11 a.m. to 12:30 p.m. The clinic is free but donations to the boys’ team are welcome. Call 845-522-2991 for more information.