After years of wrestling with threats to nature and residential property, periodic bursts of acrimony, and bumper-to-bumper traffic, Philipstown officials and other stakeholders convened last week to discuss answers to the vexing problem of too many vehicles and too few places to park along Indian Brook Road in Garrison.

One idea: Get visitors to avoid cars entirely.

Angling off Route 9D about a mile south of Cold Spring and dating to colonial days, Indian Brook Road passes near a waterfall that shares the road’s name and the Constitution Marsh Audubon Center and Sanctuary, a haven on the Hudson River for birds and other wildlife.

Once known mostly to Philipstown residents, who relished its serenity and beauty, the state-owned waterfall became staggeringly popular in recent years as word and photos spread on social media of its virtues as a swimming hole (although swimming is forbidden) and spot for picnics and parties.

However, after storms last winter destroyed the path to the falls, the state closed the site. “There’s no trail there and we can’t build one” quickly, easily or without huge expense, Evan Thompson, manager of Hudson Highlands and Fahnestock state parks, said at the meeting. 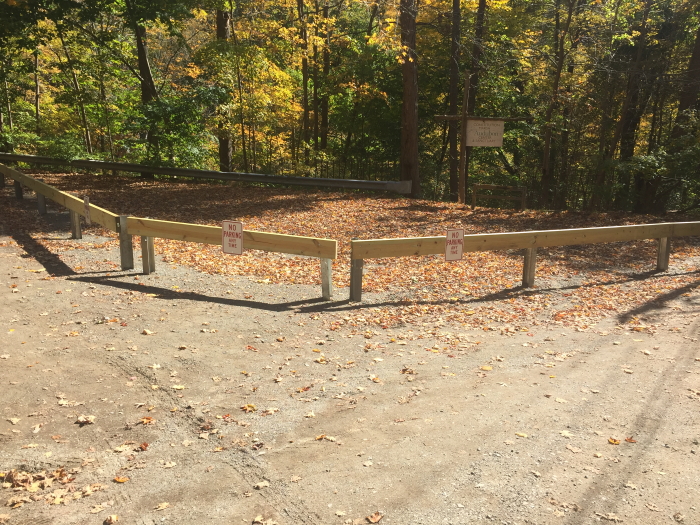 Even before the storm damage, the Philipstown Town Board had blocked off a small parking lot on Indian Brook Road that served Constitution Marsh. Parking is not allowed anywhere along the road, which at some points narrows to a single lane.

However, “we want people to use the marsh,” Van Tassel said at the Sept. 21 confab, held at Town Hall. “It’s a gem.” Moreover, he said, town officials have been getting complaints about the inability of local residents to easily reach it, because of the lack of parking. (Paid parking is available for $14 at Boscobel but has a time limit and requires a three-quarter-mile hike.)

“We’re very much in favor of a managed solution,” said one neighbor, Greg MacGarva.

Notably, there was little or no discussion during the meeting of opening the small town-owned lot near the marsh, which has been blocked for two years by wooden barricades. The town closed the lot following a confrontation in August 2020 between a resident and a busload of Black teenagers and their adult chaperones who were being dropped off to visit Audubon.

Schultz suggested the town investigate opening a small area that may be owned by Central Hudson near the intersection with Route 9D intersection that is now blocked by cement barriers.

Schultz’s draft also proposed alternatives for reaching the marsh, such as bicycling, Audubon-led canoe excursions and the county trolley that circles Philipstown.

She also said Audubon in the long-term may want a small lot on its property, if upgrades were made to its entrance road.

Town Board Member Jason Angell pointed out that the Philipstown Trail Committee is pursuing a network of paths that would allow residents to get around without autos and that a trail from Cold Spring to Constitution Marsh is on its radar.