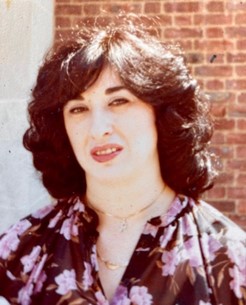 Anne Papalardo-Blake left 160 Fifth Ave. in Manhattan, where she worked at a Vidal Sassoon clinic, at 6 p.m. on March 18, 1980, telling co-workers she intended to meet her husband to look at an apartment in Queens.

Four days later, her family received a telegram from “Anne Blake” which, according to her son, said she was “under great pressure and needed to get her head together. See you in a couple of weeks.”

On Sept. 23, the New York State Police announced that, using DNA technology and genealogical research, they have solved Papalardo-Blake’s disappearance and another mystery: a headless and handless body discovered by maintenance workers, two days after her disappearance, inside a trunk left beside a dumpster at the Hudson View apartment complex just north of Beacon, in the Town of Fishkill.

Without fingerprints or teeth to compare to dental records, police passed out leaflets to drivers on Route 9D in the days after the discovery. They also pursued hundreds of leads as their investigation stretched into decades, including calls about the victim’s identity and potential suspects, said Eugene Donnelly, the state police investigator handling the case.

Even after a jury convicted Papalardo-Blake’s husband of killing the next woman he married, the identification had to wait for innovation: the ability to extract DNA from evidence and the ever-growing collection of genetic databases that allow law enforcement to identify victims and perpetrators by matching relatives.

Othram, a Texas company founded to help police identify victims and suspects, used evidence provided by the FBI to develop a DNA profile that led to Papalardo-Blake’s identification. The company specializes in working with degraded or contaminated remains, such as those that have been outdoors for long periods of time or burned, said Kristen Mittelman, its chief development officer. 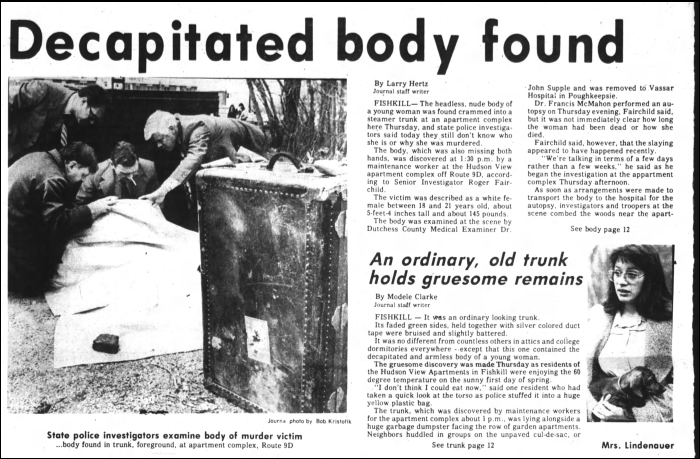 A Poughkeepsie Journal report in 1980 on the discovery of the body.

Scientists for the company also compiled a DNA profile from the skeletal remains of a woman discovered by a hiker in Harriman State Park on Mother’s Day in 1984. The DNA testing this month of a potential family member confirmed the identity of the woman, whose name is being withheld because of the investigation.

“I think it’s amazing,” said Donnelly of the technology. “I’m sure we’re going to use it a lot more in the years to come to either identify victims, like in this case, that weren’t identified for over 40 years, and potential suspects.”

In Papalardo-Blake’s case, police believe that someone left the weathered green trunk at Hudson View between noon and 10 p.m. on March 18, 1980, the last day anyone saw her alive. Two days later, maintenance workers discovered the body.

One woman who had seen the trunk a day earlier while visiting friends said she resisted the temptation to open it. A Hudson View resident said her husband thought of bringing the trunk home as a toy box for their children. Veronica Schmidt, another resident, saw the remains after they were pulled from the trunk.

“I can’t believe that one human being can be so cruel to another,” she said, according to news reports at the time.

The body was examined at the scene by the Dutchess County Medical Examiner, before being removed to Vassar Hospital in Poughkeepsie for an autopsy.

Affixed to the trunk, which was 3 feet long, 21 inches wide and 14 inches deep, were stickers indicating that it had been transported from New York City to France in 1958, returning to the city in 1960. Investigators contacted the person who owned the trunk in 1960, but were unable to trace it further.

■On April 2, 1985, a man’s body was discovered in the woods off Route 301 in Philipstown, near Canopus Lake and the Appalachian Trail. He was white, possibly 27 to 35, and about 5 feet, 10 inches tall. He had brown hair, no identification and only a few belongings, including a comb, dental floss and two laminated cards: “The Cross in My Pocket” and “God Loves CBers.” Anyone with information can contact the state police at 845-298-0952 and reference case 3032562.

■ On Oct. 9, 1995, the body of a Black or Hispanic male was found in the woods adjacent to the Garden Street School in Brewster. His death was ruled a suicide because of wounds to his wrists. He was in his 40s; 5 feet, 9 inches tall; weighed 165 pounds; and had brown eyes. He was well-groomed; clean-shaven; with short black hair and a slightly gray, receding hairline; a mole on the right side of his face near his nose; a medium, brown-skinned complexion; and perfect teeth. He was wearing brown leather Dockers penny loafers, dress socks, tan Hagger pants (33 waist, 30 length), two plaid button-down shirts; and a gold-chained crucifix necklace. He was last seen on Oct. 7 buying two expensive blankets at a curtain shop in New Rochelle. It is believed he traveled to Brewster on Metro-North. Anyone with information can contact the state police at 845-677-7300 and reference case 3020193.

While the state police continued working to identify the remains, New York City officers investigated a missing-persons report filed by Papalardo-Blake’s son, Pat. “She would never leave like that, without telling us where she was going,” he told them, according to news reports.

Earlier this year, using the profile that scientists at Othram created, the FBI found a lead that it shared with the state police. Investigators from Troop K, based in Poughkeepsie, identified Papalardo-Blake in May. She was 44 when she died.

“Degradation isn’t the issue,” said Mittelman. “We’re able to identify victims that are found in sewage tanks and at the bottom of lakes, and chemically treated evidence with formaldehyde — I mean, anything you can think of.”

When Papalardo-Blake disappeared, her estranged husband, Rick Blake, became an immediate suspect. Six months later, he remarried, to his fourth wife, Maryann. (At the time of Blake’s arrest in 1982, according to a  news coverage, his first wife was reported to have died of natural causes and his second wife was living in Canada.)

In 1982, police charged Rick Blake with strangling Maryann, whose nude and toothless body (she had worn dentures) was found Aug. 5, 1982, wrapped in a sheet in the parking lot at Green Acres Shopping Center in Valley Stream. A Nassau County detective testified at his trial that Blake, when arrested, said: “Thank God, it’s over.”

He was convicted of second-degree murder in 1984 and sentenced to 20 years to life. At the time of the verdict, Anne Papalardo-Blake’s disappearance remained unsolved. According to Robert Walford, the lead detective in Maryann Blake’s killing: “The fact that we knew about the third wife and could do nothing about it [because a body had not been found], added to the need to prosecute this case.”

Rick Blake was imprisoned at the Green Haven Correctional Facility in Stormville when he died in January 2005 at age 71. Despite his death, state police investigators with Troop K are still asking anyone with information to contact them at 845-677-7300 and reference case 3020974.

“I don’t want to compromise the investigation, but I can say that it was most likely somebody who was close to her,” said Donnelly.