The Rev. Scott Harris, pastor of Grace Bible Church in Wappingers Falls, believes the prohibition makes his church unsafe for the same reason.

It is a conviction he shares with Christian ministers in 19 other New York counties who, along with an evangelical advocacy organization called New Yorkers for Constitutional Freedoms, filed a federal lawsuit this month challenging the constitutionality of the designation of houses of worship as a “sensitive location” under the state’s Concealed Carry Improvement Act.

In response to a separate lawsuit filed against the governor, the state police superintendent and district attorneys and law enforcement officials in four counties and Syracuse over the law, a federal judge on Oct. 6 issued a temporary restraining order against some provisions but upheld the designation of certain locations as sensitive areas — with a notable exception “for those persons who have been tasked with the duty to keep the peace” at a house of worship. (On Oct. 12, an appeals court set aside the stay, meaning the law can be enforced for now.)

The pastors’ 20-page complaint, filed in Binghamton, names the district attorneys of 20 counties as defendants, including William O’Grady in Dutchess. Its chief claim is that the Concealed Carry Improvement Act denies them the right to effective self-defense because it prevents their churches from using armed security teams comprised of congregants who have concealed-carry permits. They also argue their security details are being disarmed amid a rise in shootings that target worship services. 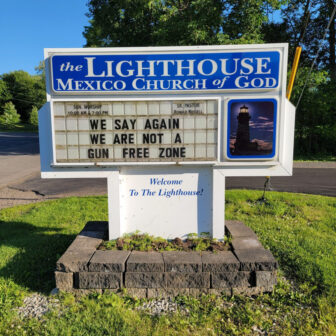 Although not a party in the pastors’ lawsuit, this church in Oswego County made its position known. (Facebook)

Harris said that Grace Bible has a security team that includes active and retired police officers, who are exempt from the law. But he, along with former military personnel who are part of the team, might to subject to felony charges if the barring of weapons at houses of worship survives court challenges.

“We believe a law that endangers our congregation by forcing us to be a soft target for violence must be fought,” he said.

Gun violence targeting people at religious services or gatherings represents a small subset of shootings, and none has taken place recently in New York state. But there have been deadly attacks elsewhere. Seven years ago, a white supremacist killed nine people at Mother Emanuel African Methodist Episcopal Church in Charleston, South Carolina, and 11 people died when a man with antisemitic views attacked the Tree of Life synagogue in Pittsburgh in 2018. The worst mass shooting in Texas’ history, which killed 26 people, took place at First Baptist Church in Sutherland Springs in 2017.

There have been at least four shootings at houses of worship this year, including in California, Iowa and Alabama.

“In an ideal world, churches and congregants could focus on worshiping the Lord and loving their neighbors without concerning themselves with matters of safety and security,” said the Rev. Jason McGuire, the executive director of New Yorkers for Constitutional Freedom. “Unfortunately, the reality of church shootings in the U.S. reminds us that this is not an ideal world.”

An earlier version of this story stated that the pastor at Grace Bible Church in Wappingers Falls feared that active and retired police officers on its armed security team could face felonies under the state's new concealed-carry law. In fact, police officers are exempt from the law and the pastor was referring to himself and ex-military personnel on the security team.