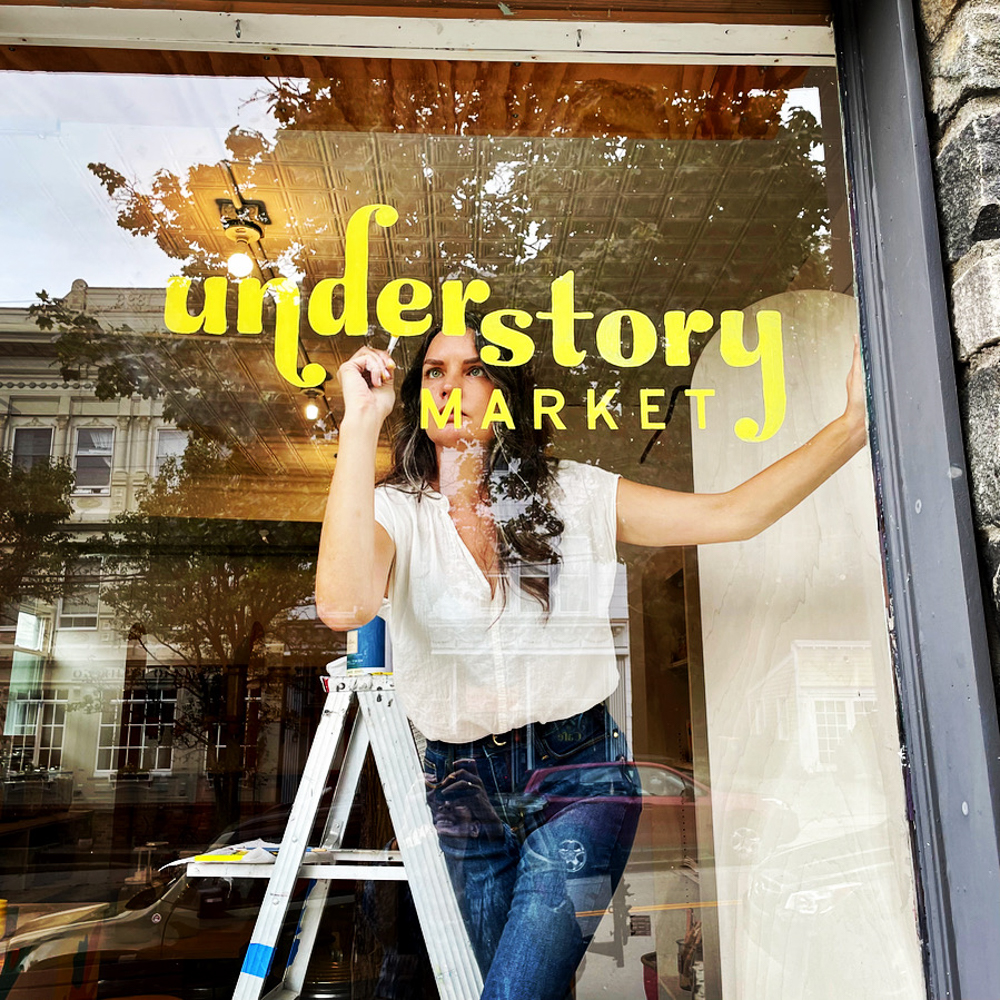 Murals and other decorative painting are a balm in a busy life for Herman. Her designs can be seen at Understory Market, where she decorated a counter and painted the window art that was designed by Michelle Silver; Split Rock Books, where Georgie, the ginger cat, is a highlight of a counter; Palmera, where she did the window lettering; and Love Letter, where she installed lingerie-wearing, diving women.

In Beacon, Herman’s work can be seen on a gate at Kitchen Sink and in Newburgh in an expansive mural at the Tigers Don’t Cry salon.

Her commissioned artwork is also displayed in private homes. In the meantime, her children, 11 and 14, are waiting for their own murals. 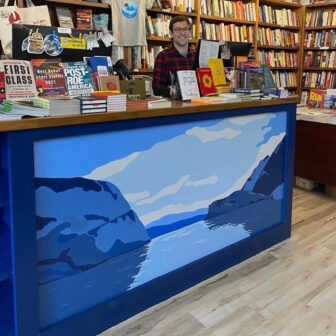 Herman’s painting on the counter at Split Rock Books in Cold Spring, with co-owner Michael Bender

Herman embarked on her unexpected career only about a year ago, when Lara Shihab-Eldin and Sammy Smith-Coleman, the co-owners of Understory, approached her about painting inside the store.

“They knew I did plein-air landscapes,” Herman recalls. She had never done murals, “but I guess they had a feeling. It was collaborative, lots of back and forth. It’s nice to work in a community that values everyone’s creativity.

“I’ve always had art in my life,” she adds. “I always have to create, make things, be constantly learning something new. I feel like I’m just starting to emerge.”

Herman says she has developed a process for her wall art. “I take a long time before I create a drawing,” she says. “I meet with the proprietor, they send me inspiration — some unrelated, some conveying a feeling they want in the space.” 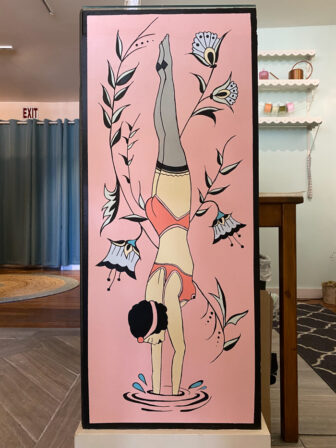 At Love Letter, Alethea Hohenberger said she wanted a vintage tattoo print with an Art Nouveau feel. “We did a lot of talking up front,” Herman says. “I drew, then projected it on the wall. Painting in the store is like a meditation; I get lost in the brush strokes, mixing colors.”

Herman grew up in a conservative family in Olivia, Minnesota (pop. 2,500), “a small town where corn is king,” she says. “There’s even a statue of a giant corncob.” In high school, the music teacher suggested she apply to a boarding school, the Minnesota Center for Arts Education outside Minneapolis, about two hours away.

“She saw something in me that was being tamped down by the community,” Herman says. “Along with my teacher, my grandma showed me fine art, modern art, theater, music. The Minnesota Center was full of outcasts and kids from all over the state with special gifts; it changed my life.” 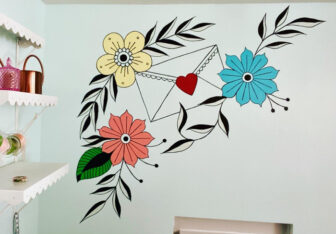 A wall design at Love Letter

At Flagler College in Florida, Herman majored in theater and broadcast journalism but took every art class she could. She moved to New York City in 2001, soon after 9/11. After a stint on the Bloomingdales sales floor — where she says she made mental notes on the displays and mannequin dressings — she was recruited by Louis Vuitton for its visual marketing team. She later worked in similar capacities for Mattel and American Girl, jobs that included creating Fifth Avenue window displays. 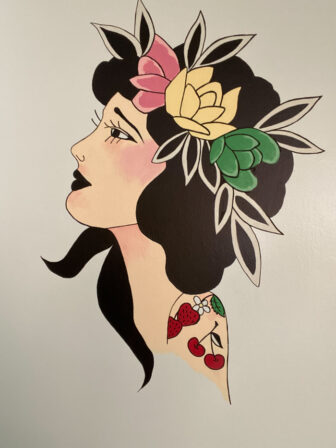 A design for Love Letter

Finally, she was hired by Nike to run the visual department at its flagship store, which she did for five years before deciding in 2012 to stay home with her young children. She also says she had become disenchanted with corporate retail. “I don’t want to make things look enticing as a way of people setting themselves apart from people,” she says. “I want to do something with more value to benefit people.”

Herman met her husband after stepping into a Brooklyn community museum, meeting the director (him) and going on a business dinner where no business was discussed. They moved to Philipstown in 2017, via Brooklyn and Hawaii.

“My husband and I wanted a change, so we thought ‘Let’s have an adventure!’ ” she says. “We packed up and lived on the Big Island for a while and I did merchandising for a museum. Meanwhile, a friend had moved to Philipstown and we’d come back to visit. It may seem strange, but we saw similarities with Hawaii. It’s so lovely, and it’s a beautiful artery into the city, where there’s access to more diversity. Over the years I’ve come to love it here even more.

“Painting murals is giving me a way to feel like I belong here,” she adds. “I love being part of the fabric of it all, not just a visitor. When I’m painting in the village I usually go and get a sandwich or coffee nearby, and it becomes a community for me.”