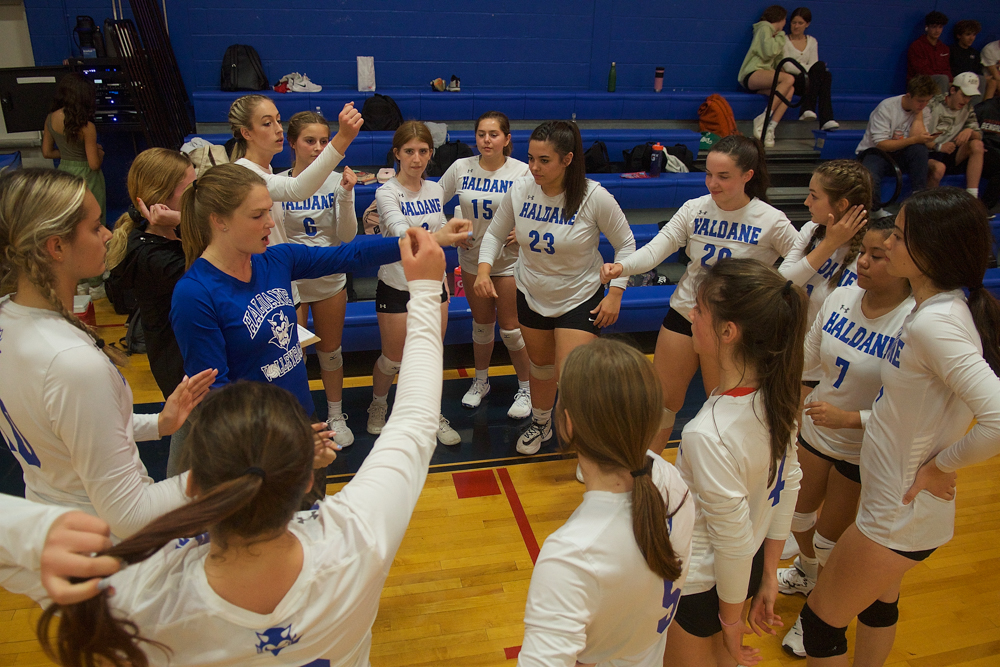 Coach Kelsey DiFrancesco and the Blue Devils get ready to take on Tuckahoe Tuesday at home. (Photos by Skip Pearlman)

Haldane tied the game with nine minutes left in regulation when Brandt Robins finished a pass from Matt Silhavy. Peekskill had scored its goal three minutes into the game on a penalty kick.

“We controlled 80 percent of the game,” said a disappointed Coach Ahmed Dwidar. “I feel like we missed about four goals. This game needs to be a wake-up call for us. We came out flat in the first half.”

On Oct. 8, the Blue Devils hosted Ketcham High School from Wappingers Falls, and had scored twice in the first 29 minutes when a Ketcham player suffered a neck injury. Play was halted while he was airlifted to a hospital, and the Ketcham coach decided to forfeit. Fortunately, the player was not seriously injured.

Ryan Eng-Wong scored one of the two goals for Haldane, the 60th of his varsity career, a school record. Clement Grossman had the other.

Haldane (11-2) defeated North Salem, 4-1, on Thursday (Oct. 13) and is scheduled to host Croton-Harmon on Saturday (Oct. 15) at 1:30 p.m. for homecoming. The Blue Devils are ranked sixth in the state in Class C by the New York State Sportswriters Association.

Beacon picked up what Coach Craig Seaman called “a big win” to hand undefeated Goshen its first loss of the season last week, prevailing 2-1 in overtime. Andre Alzate tied the game in the final minute of regulation and Jaidyn Caccomo delivered the winner in the second extra period. Both goals came off corner kicks.

In other games, Beacon fell to Bronxville, 1-0, at home on Monday and defeated Minisink Valley, 8-0, on Wednesday to improve to 7-3-2. The Bulldogs are scheduled to visit Monticello today (Oct. 14) and close the regular season hosting Cornwall at 4:15 p.m. on Tuesday. 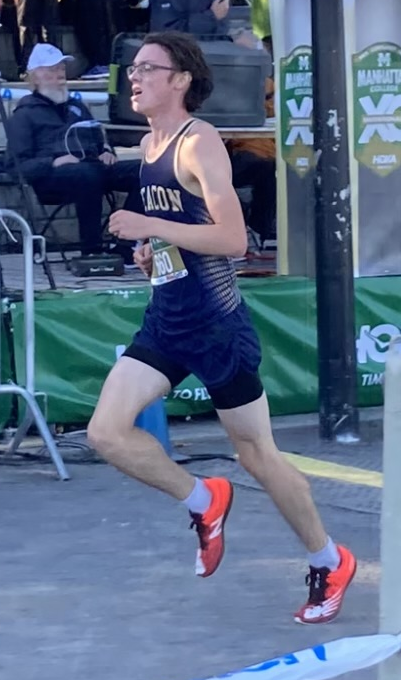 Beacon competed at the Manhattan College Invitational, where the Bulldogs had three medalists: Henry Reinke and Jack Twining for the boys and Rachel Thorne for the girls. The team heads to the regional championship next.

Ellen O’Hara and Fiona Shanahan, in their first tournament appearance, fell to a team from Nyack, 6-1, 6-0.

As one of the top 12 teams in its 24-school division, Haldane qualified for the team tournament and was seeded No. 5. It was scheduled to host Blind Brook on Thursday (Oct. 13).

Beacon defeated Cornwall, 4-3, fell to Monroe-Woodbury, 5-2, and defeated Goshen, 4-3, to improve to 7-3 (4-0 league) and qualify for the first time as a team for the Section IX tournament.

Despite playing strong during stretches, Haldane fell to Tuckahoe, 3-1, on Tuesday (Oct. 11) in Cold Spring. 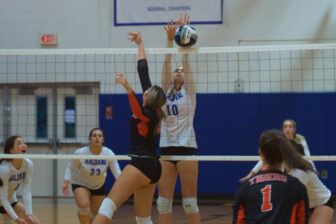 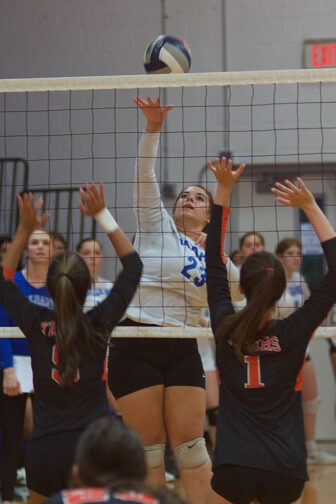 Haldane’s Mikayla Santos (23) had four kills and nine digs in a loss at Briarcliff.

“It was a back-and-forth battle,” said Coach Kelsey DiFrancesco. “It came down to some long rallies, and we fell short when we needed points. We came back from six down in the third but lost. We didn’t execute when we had chances.”

“All six of our seniors — Weinpahl, Jordan, Megan Farrell, Madeleine Knox, Mikayla Santos and Medeleine Gardephe — have played a huge role,” DiFrancesco said. “And our three captains — Jill, Mikayla and Madeleine — have all stepped up.” 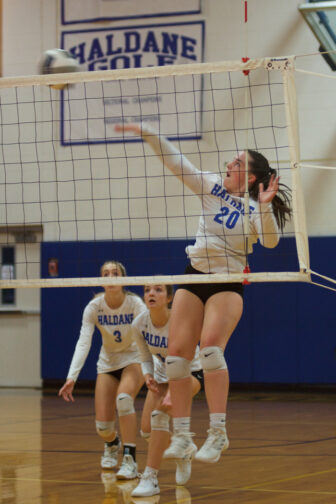 Haldane junior Emily Tomann had five aces and four kills Tuesday in a loss to Tuckahoe.

Beacon had three wins over the past two weeks, defeating Monticello (3-1), John Burke Catholic (3-2) and Middletown (3-0), but fell on Wednesday at Minisink Valley (3-0).

The Bulldogs (7-7) fell to Cornwall on Thursday, 3-0. The team will host Franklin Roosevelt on Monday (Oct. 17) and Goshen on Wednesday. Both matches begin at 6 p.m.

Beacon suffered a 34-8 home loss on Oct. 7 against Cornwall; the Bulldogs scored their touchdown in the fourth quarter on a 36-yard run by Leibenson Perez-Novas. A bad snap on the extra point forced kicker Mercer Jordan to pass to Aaron Pegues, which was good for a two-point conversion.

Danny Urbanak had a defensive interception in the second quarter but was injured on the play and did not return. Urbanak, the team’s quarterback, will not play when the team travels to Monticello on Saturday (Oct. 15). With Jordan, the backup QB, also hurting, center Joe Battle will step in.

Against Cornwall, Perez-Novas led the offense with 102 yards on 19 carries. Pegues had five tackles and three receptions for 22 yards; Jayden Calloway had a fumble recovery and four tackles; Owen Lynch had a run for 20 yards, plus three tackles; Jordan completed 4 of 9 pass attempts; and Alex Khalil had three tackles.

Despite the lopsided loss, “this was actually the best game we played yet,” said Coach Jim Phelan. “The scores are not an indication of the improvement we’re seeing.”

Thomas Tucker scored for the Blue Devils on a 12-yard pass from Ryan Van Tassel in the first quarter to make it a 14-6 game, but from there the Vikings scored 21 unanswered. Haldane didn’t score again until the fourth quarter, when Van Tassel ran it in from 13 yards.

Haldane was unable to get the air game going, with Van Tassel going 2-for-12. Evan Giachinta had 73 yards on 11 carries, and Van Tassel ran for 67 yards on 10 trips.

“Valhalla was fast, and they executed,” said Coach Ryan McConville. “We kind of got our butts kicked. We have to execute better.”

Beacon dropped a 3-1 decision at Goshen on Tuesday (Oct. 11), with Reilly Landisi scoring for the Bulldogs on an assist by Devyn Kelly.

Beacon (8-3-1) travels to Minisink Valley on Saturday (Oct. 15) before hosting Monticello at 4:30 p.m. Monday (Oct. 17) and closing its regular season at Cornwall on Wednesday.

Haldane lost at Pawling and North Salem but won at Putnam Valley, 5-0, on five goals from Finola Kiter. The Blue Devils (5-8) will host Croton-Harmon at 11 a.m. on Saturday (Oct. 15) for homecoming.

HOW WE REPORT
The Current is a member of The Trust Project, a consortium of news outlets that has adopted standards to allow readers to more easily assess the credibility of their journalism. Our best practices, including our verification and correction policies, can be accessed here. Have a comment? A news tip? Spot an error? Email [email protected]ghlandscurrent.org.