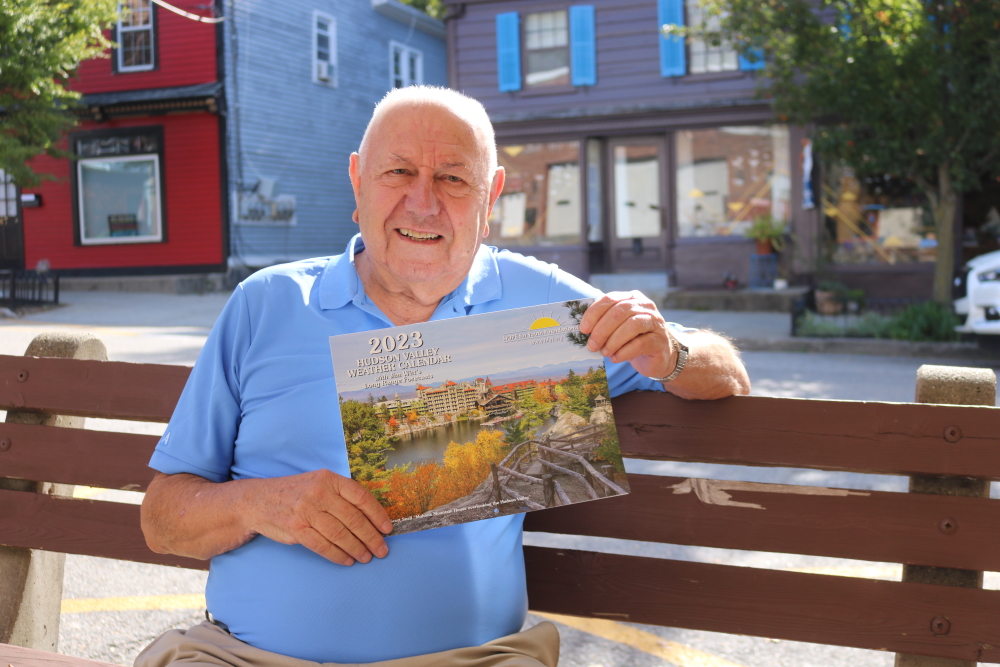 Jim Witt with the 2023 calendar (Photo by Michael Turton)

In the beginning, more than 50 years ago, not even Jim Witt would have been able to forecast the impact of his annual weather calendar.

The calendar, which foretells daily conditions 14 months in advance, is available every fall at retailers in the Hudson Valley (and at hfyf.org), with proceeds benefiting charities that help children.

In 2021, the Hope for Youth Foundation, which collects and distributes the proceeds, raised $185,000 for 32 organizations, including the Desmond-Fish Public Library in Garrison, the Garrison Volunteer Ambulance Corps. and the Philipstown Behavioral Health Hub in Cold Spring. Since 1998, the foundation also has awarded college scholarships to students from Haldane, Lakeland, Walter Panas, Putnam Valley and Peekskill high schools.

The calendar was born in the early 1980s when Witt was “the weather guy” at WHUD Radio in Beacon. He would make predictions further out than the typical two- or three-day range — “I’d say, ‘Coming Jan. 5, there’ll be a snowstorm,’ ” he recalled — and the station owner, Gary Pease, observed: “People go nuts over this long-range stuff — maybe we could do a forecast for [the entire] winter.”

Witt offered to mail his long-range forecasts to anyone who sent the station a stamped, self-addressed return envelope. “The response was so crazy that we quickly realized that we had to do something different,” he said. “The next year we put it on a foot-and-a-half-long sheet of paper surrounded by advertisements. Thousands of people requested it. It was then I thought I should print a calendar and write the forecast in the spaces.”

Witt enlisted Tore Jakobsen, who, like Witt, was a former teacher at Lakeland High School who had become a radio meteorologist, and in 1986 they printed a calendar to raise money for organizations that help children.

Their first beneficiary was Friends of Karen, a charity based in North Salem that helps families when a child is diagnosed with cancer. “They do anything, from buying the family a washing machine to providing gifts for all the kids in the family during the holidays,” Witt said. “We gave them all of the funds we raised that year, around $1,000. We give them $10,000 a year now.”

“We’d like to do more, but there’s plenty of need here,” said Witt, 85. “We’ve come a long way, and no one gets paid. We have no office, no dedicated phones, nothing, so all of the funds are given out to those in need.”

The foundation has 15 board members who each spend a day at two or three organizations that request funding to make sure the grants are well-spent.

Along with the forecasts, the calendar includes photos donated by photographers such as Cory Lyons of Cold Spring and Scott Snell of Beacon. This year’s calendar covers November 2022 through January 2024.

Jim’s Forecast for This Week — Next Year

Slight chance of shower or thunderstorm

Fair to partly cloudy and seasonable

Witt does more than predict Hudson Valley weather; he scouts 2,500 locales across the country for his site theweatherwiz.com. He said he caught the forecasting bug as a child in Queens when he read about a hurricane. “It excited me to no end, and I became a weather nut,” he recalled. He studied biology in college while on a baseball scholarship and taught on Long Island for three years before buying a house in Peekskill and landing a job in 1963 teaching earth science at Lakeland High School in Shrub Oak.

“It was the only job left in the department, and I didn’t know what earth science was at the time,” he says. “They explained it combined geology, astronomy and weather — everything I was interested in. In fact, the Global Forecasting System (GFS) model was written by one of my former students.”

Witt and Jakobson formed a company, Fleetweather, to provide long-range forecasts to commercial clients. In 1973, at a time when few radio stations had their own meteorologists, they joined WHUD.

Now retired, Witt focuses — seldom foiled by the weather — on the calendar. “I never thought I’d get this old,” he said with a laugh. He continues to hone his methods with the help of software that includes weather readings dating to 1905 and factors in the effects of global warming.

A popular feature of the print calendar highlights days when storms are likely. “There’s a guy who gives me a yearly evaluation of how many I got right and wrong,” Witt said, and has found the predictions to be 90 percent accurate. “Don’t pick one of those days to have a party!” Witt advised — which hopefully he will follow, because his birthday (May 16) is predicted to be “cloudy with showers and thunderstorms, heavy.”

The 2023 Hudson Valley Weather Calendar is available for $14 postpaid at hfyf.org or for $10 at locations such as Drug World and Foodtown in Cold Spring; Vera’s Marketplace and B&L Deli in Philipstown; WHUD (Pamal Broadcasting) in Beacon; and ShopRite and the Red Line Diner in Fishkill. Witt will be at the Grand Slam Beer Festival at Dutchess Stadium from 1 to 6 p.m. on Saturday (Oct. 15) to sell and sign calendars. To donate to the Hope for Youth Foundation, visit the website or write P.O. Box 8, Buchanan, NY 10511.