Maryam Wootan, a nurse and acupuncturist who lives and works in Beacon, is a native of Iran. On Nov. 13, she will lead a dance performance at the Farmers’ Market and a musical performance at Polhill Park to bring awareness to widespread protests in the country triggered by the death of a 22-year-old woman while in custody of the morality police. 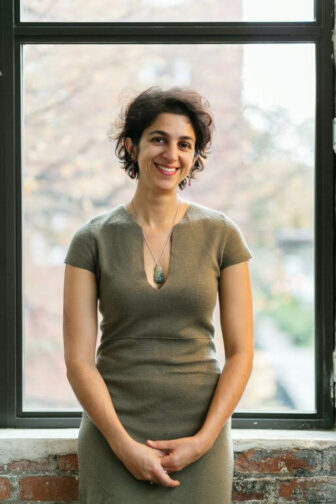 When did you leave Iran?

I knew I had to leave when I finished high school in 1997. I was filled with so much rage at the regime that the meditation that saved me was lying down on the floor of my room and imagining myself running. When I went on hikes with my girlfriends, we would be searched by the morality guards. One time they broke a cassette tape of classical music I had in my Walkman, to humiliate us. Their name, komiteh, has given me chills since I was 8 or 9 years old.

I was born a year after the revolution against the shah and the thousands of years of monarchies. Monarchy was so deeply embedded that although we revolted, my people succumbed to a new form of monarchy under the mullahs. Although many groups worked to throw the shah out, the mullahs hijacked the revolution.

What do you remember about school?

The curriculum changed to incorporate Islamic themes. We had classes dedicated to the Quran, the Arabic language and religious studies. We had to participate in the noon prayer to get a good grade in morality. We started our mornings by chanting slogans for the health of the supreme leader.

Outside school, we were constantly harassed by the morality guards and told not to wear colorful shoelaces or sweaters over our hijabs. Our bags were searched to see if we had music or books or magazines. They would even have us lift our pants to make sure we were not shaving our legs and would study our faces to make sure we had all our facial hair.

My girlfriends and I would cry “Komiteh! Komiteh!” as a joke to scare each other. I remember changing my path when I saw their van from afar. I would be filled with anger: Why do I have to change my path because of someone else’s bullying?

How did this affect you?

The environment of fear surrounded us. As a teenager, if we had a party and the morality police showed up, we made sure to have cash to bribe them. Sometimes more than one group would show up in the course of a night. There were many incidents of people being jailed and receiving lashes for throwing a mixed party or serving alcohol. I remember sitting in a car with my boyfriend and having to lower my head every time a suspicious car drove by so we wouldn’t get arrested. I was covering my head with a scarf, covering my mind, my hair, my body, my identity, having half the rights of a man at any moment.

This was a country I care for so much, with such an amazing history, poetry, architecture, food, jewelry, handcrafts and scenery, and such clear-hearted and generous people. But I couldn’t stand living there. My father was a filmmaker but said that making movies in Iran was like walking a tightrope. Many of his movies were banned or heavily censored. My mom was an architect but most projects went to men and government organizations.

Have you stayed in touch with childhood friends?

More than 90 percent of my classmates live abroad: artists separated from their roots, female performers exiled. Music was the art that the mullahs could not tolerate. We used to have an amazing philharmonic concert before the revolution, we had performers and artists and creators who were ready to blossom. That’s not to mention the doctors, engineers, scientists and entrepreneurs who could have made my country a heaven to live in. They are contributing, but in other countries.

Are you hopeful about the protests taking place?
In the 23 years since I came to New York, Iran has been in the news constantly. But this movement for freedom seems to be the most global. Millions of Iranians in exile are connecting to one another. The youth, the teenagers, the ones with ticking bombs in their hearts, instead of changing their path, are walking straight toward the morality guards, with their scarves in their hands and shouting “Women! Life! Freedom!”

For the first time in my life, I am imagining what Iran would look like as part of the free world, with women enjoying the same rights as men, both enjoying respect and the wealth of a nation. Women and men hand-in-hand, songs and laughter in the streets. Artists, journalists, social activists, athletes and others working, living, creating. Foreigners visiting my country with curiosity. I have hope.