“We had an unusually busy weekend; the village was very, very full,” particularly this past Saturday, Mayor Kathleen Foley noted at the Wednesday (Oct. 26) meeting of the Cold Spring Village Board.

She described the weekend as “a confluence of events” that included a Seastreak docking, Family Weekend at West Point, a Haldane home football game, near peak-color fall foliage, hikers, buses, motorcycles, cars — and a lot of trash.

“Cold Spring has been discovered on social media; there is no putting that genie back in the bottle,” Foley said, adding that a recent online video promoting the village as a day trip had 400,000 views and 48,000 “likes.”

“The village itself has become a destination; it’s not just the trails,” she said.

Cold Spring is working with Royal Carting to add more trash bins along Main Street, she said. Tour companies are being made aware of the difficulties created by buses attempting to drop passengers off on Main Street. And she is discussing with Larry Burke, the officer-in-charge of the Cold Spring Police Department, adding more weekend policing to assist with traffic control.

As for long-term solutions, Foley said the village will look to the state Department of Transportation and New York Conference of Mayors “to see what our options are for limiting bus and truck traffic.”

Foley said she was not optimistic about help from Putnam County.

“The county budget cycle is just ending with no provision to help local governments cope with the tourism it promotes,” Foley said. The presumptive incoming county executive does not support such assistance, she said.

“We’re hoping to convince him that if he is not sending money back for the tax dollars we send over, that he will send services; we need them desperately,” Foley said.

Putnam does not share sales tax revenue collected in municipalities.

The weekend was “way beyond what we’ve seen before,” resident Dan Valentine said during the public comment period. “All these people coming in, leaving garbage for us to clean up, and  we’re not seeing any benefits to the village.”

“And at least this time of year it may be beneficial to bring back a Highway Department worker or seasonal employee to help bag up garbage on weekends,” Valentine said.

Foley said the previous administration didn’t take into account spacing near crosswalks required by the state for pedestrian safety.

“That changes the calculation of the number of metered parking spaces,” Foley said, an issue Trustee Eliza Starbuck is working to correct.

She said increased parking revenue is essential, especially since Seastreak cruises haven’t visited Cold Spring as often as planned this year, which will reduce the docking fees paid to the village.

She added that once in place, the occupancy tax being added to short-term rentals in the village will improve tourism revenue.

The mayor said she hopes progress can be made on the Parking Committee’s recommendations by springtime.

Lloyd DesBrisay, a resident of the lower village, said trash is a problem most of the year there and advocated more bins.

Foley said underused cans at the far end of the dock have clustered at the most problematic area, next to the bandstand.  A compacting trash bin is being donated but she said it will not be in place until next season.

Foley said the owner of Moo Moo’s ice-cream shop has not responded about having the shop assist with emptying trash bins, a practice that has been adopted by some Main Street shopkeepers. Moo Moo’s produces large amounts of trash but has only one small bin on the premises, she said.

After decades of delays, the Village Board at its Wednesday meeting authorized Foley to enter into an agreement with the New York City Water Board that will allow the village to re-establish a backup connection to the Catskill Aqueduct.

“I’m so pleased to bring this to the board at long last,” Foley said, explaining that a connection made in the early 1990s was disconnected when New York City began making improvements to the aqueduct. The connection had been leaking badly. 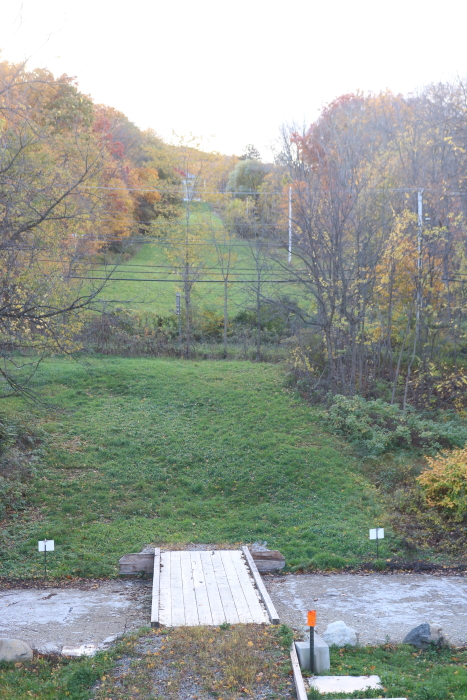 The Catskill Aqueduct where it passes through Nelsonville. (Photo by M. Turton)

The agreement provides a five-year window, plus options for two, 1-year renewals, for the village to develop engineering plans for repairs to its reservoir dams “and/or alternative solutions for our water supply issues,” Foley said.

In 2021, Chazen Engineering estimated the cost of repairs to the village dams at $6 million to $8 million and suggested that alternatives, such as drilling wells in the Clove Creek aquifer, could be more cost effective.

Foley said the village will consider whether dam repair is the best strategy or whether another secondary water supply could make the aqueduct a tertiary source.

Trustee Laura Bozzi said the agreement with the Water Board specifies limits on per-person amounts of water the village can take from the aqueduct during an emergency, such as for dam repairs.

“We will need to enforce that” Bozzi said, adding the agreement requires the village to develop a conservation plan to be implemented when water is drawn from the aqueduct.

Foley said the village also has agreements with Nelsonville and Philipstown for water use “that should have been in place a long time ago.”

The 92-mile-long Catskill Aqueduct, completed in 1916, originates at the Ashokan Reservoir in Ulster County and supplies water to New York City. It transects Philipstown at Route 301 just outside Nelsonville.

■ Cold Spring is joining a lawsuit against Columbia Utilities, the independent energy company that had supplied “green” electricity at lower rates to residents and small businesses in  Cold Spring, Philipstown, Beacon and other Hudson Valley municipalities that are part of the Community Choice Aggregation. The suit, brought by Joule Assets Inc., which administered the CCA, alleges that Columbia breached its agreement in April by terminating services and transferring participants back to Central Hudson. Foley said there will be no cost to the village; Joule is paying all legal fees. She said she hopes the suit will recover any losses suffered by village consumers.

■ Foley will sign an agreement  enabling the Town of Philipstown to use a New York State Energy Research and Development Authority grant to install a dual electric-vehicle charging station at the Mayor’s Park parking area. Bozzi said the village and town will share the first-year, $865 after-grant costs. She estimated subsequent annual costs will be $270 and that the village will use part of a $5,000 state clean air grant to cover the expense. Once operational, annual revenue from the station is expected to exceed costs.

■ Residents can again purchase winter parking permits for the municipal lot on Fair Street. Up to 24 permits, at $40 each, will be issued, valid from Dec. 1 through April 15. Applications are available at Village Hall.

3 thoughts on “Crowds Cause Chaos”