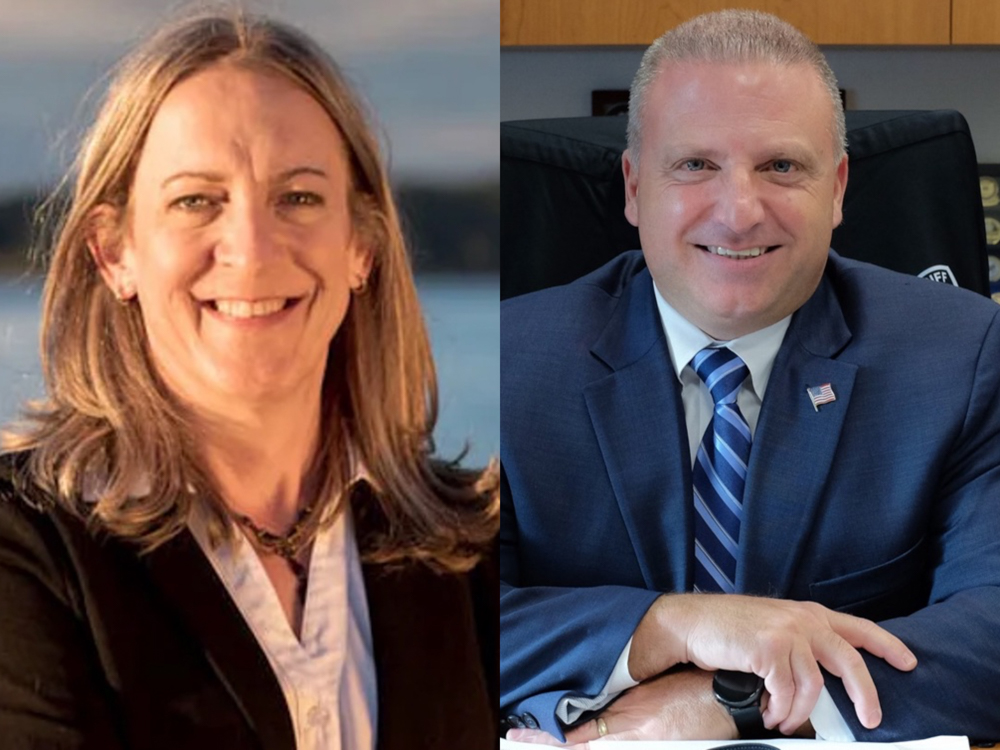 In the Dutchess County sheriff’s race, voters have a choice between candidates who worked together for many years: acting Sheriff Kirk Imperati, a Republican, and his Democratic challenger, Jillian Hanlon. Both are experienced law enforcement officers who said in interviews they want to attack crime and its underlying mental health issues.

It will be the first contested race for sheriff in Dutchess County in 23 years. The winner will succeed Adrian “Butch” Anderson, who was elected sheriff in 1999 with 61 percent of the vote and subsequently won five, 4-year terms without opposition. Anderson died in September 2021 and Imperati, his second-in-command, became acting sheriff.

Hanlon, who lives in Millbrook, is a Marist College graduate who became a sheriff’s deputy in 1999 after two years as corrections officer. She retired in November 2021 and, if elected, would be the first openly transgender sheriff in the country.

She added, “We talk about improving and increasing diversity as an important public policy goal. Well, here I am.”

Imperati agreed that improving diversity is an important goal for the office. A list of 148 positions provided by the agency last year showed its employees include 20 women, five Latinos, two Blacks and two Asians. White males held the rest of the positions.

The sheriff’s office “has worked diligently to increase diversity within our agency to be more representative of the communities we serve,” Imperati said in March at the graduation of the Dutchess County Police Academy, calling the class “the most diverse group of graduates” in the history of the academy.

That class included two full-time deputies, both men, one of whom is “multiracial,” according to the sheriff’s office. The class also included seven part-time officers: two Black men, two white men, one Black woman, one Latino woman and one Latino man.

Both candidates have long careers in public service and law enforcement.

“I’m everyone’s sheriff,” Imperati said. “I’m not a political person. This is a calling for me. I’ve wanted to be in law enforcement since I was in high school.”

In his 29 years with the department, Imperati has held a series of positions, including road patrol officer, detective and supervisor of crime prevention programs in local schools and organizations. Most recently, he was undersheriff, overseeing day-to-day operations at the sheriff’s office, including the corrections, civil and road patrol divisions.

Hanlon’s career included stints as a corrections officer, deputy and paramedic. “I have decades of real world experience,” she said. “I have talked multiple people off the ledge.”

She said that, while in high school, she decided to be a paramedic because of the television drama Emergency. She was hired as an ambulance driver in Hudson in 1984 and became a paramedic in Poughkeepsie in 1988. After working as a union organizer, she joined the sheriff’s office in 1996 as a correction officer and became a deputy in 1999.

Imperati said that lobbying to reverse bail reforms tops his agenda. He expressed frustration at how quickly, under a law that took effect in January 2020 that eliminated cash bail for most misdemeanors and nonviolent felonies, defendants are released after being arrested.

“We call the judge, they tell us to issue an appearance ticket and our people are processing paperwork while that person is back on the street committing the same crime,” Imperati said. “It snowballs out of control where you have people committing these offenses six and seven times in one week or more and putting our community at risk.”

(According to data compiled by the state, the effects of bail reform are far less conclusive. Generally, defendants are returning to court and not being arrested again while their cases are pending at the same levels as before bail reform. However, the figures do not include town or village courts.)

Imperati also emphasized the need to fight the abuse of opioids and heroin. He said his office is putting together a response team with deputies and mental health workers to provide both policing and counseling to help people under the influence of drugs.

Hanlon agreed the department should address mental health issues. “The one thing that absolutely separates us is who is better qualified to address the mental health needs of the incarcerated, the staff and the public at large,” she said. She pointed to her own role in 2002 in helping to create the county’s Critical Incident Response Team,​​ peer volunteers who help first responders deal with job-related stress.

Hanlon said she is running on an anti-crime platform that, for her, means attacking “poverty, desperation and trauma, particularly childhood trauma,” she said. “The heart of my campaign is compassion.”

In particular, Hanlon points to the need to improve management of the Dutchess County Jail, which is operated by the sheriff’s office.

“If we want to get a handle on street violence, the way to do that is to address what is going on at the jail,” she said. “We keep graduating worse criminals from our jail. If our jails have become de facto psychiatric hospitals, we need to start treating them as such.”

“I intend to address the mental health needs of both the criminals and the staff,” she said.

Imperati agrees the jail is understaffed. “We have a lot of mandated overtime,” he said. While he has hired 38 full-time and 25 part-time correction officers this year, he admits that it’s hard to retain them. “It’s a revolving door,” he said.

Imperati says staffing should improve once the county replaces the jail with its Justice and Transition Center, due to open in 2024. He said the facility — which will have 328 beds in 297,000 square feet — will allow the department to improve its inmate-to-correctional-officer ratio. Currently, because the jail population has been dropping, the ratio is 1.3 inmates for every officer, he said. Because of its more efficient design, the new facility will improve the staff ratio to 3 inmates for every officer.

Hanlon said the new facility alone will not fix the problem. “It boils down to an absence of leadership,” she alleged. “If you have the exact same toxic organization moving into a new facility, it’s like having the same hermit crab in a new shell.”

One thought on “Dutchess Sheriff Candidates on Bail Reform, Diversity”