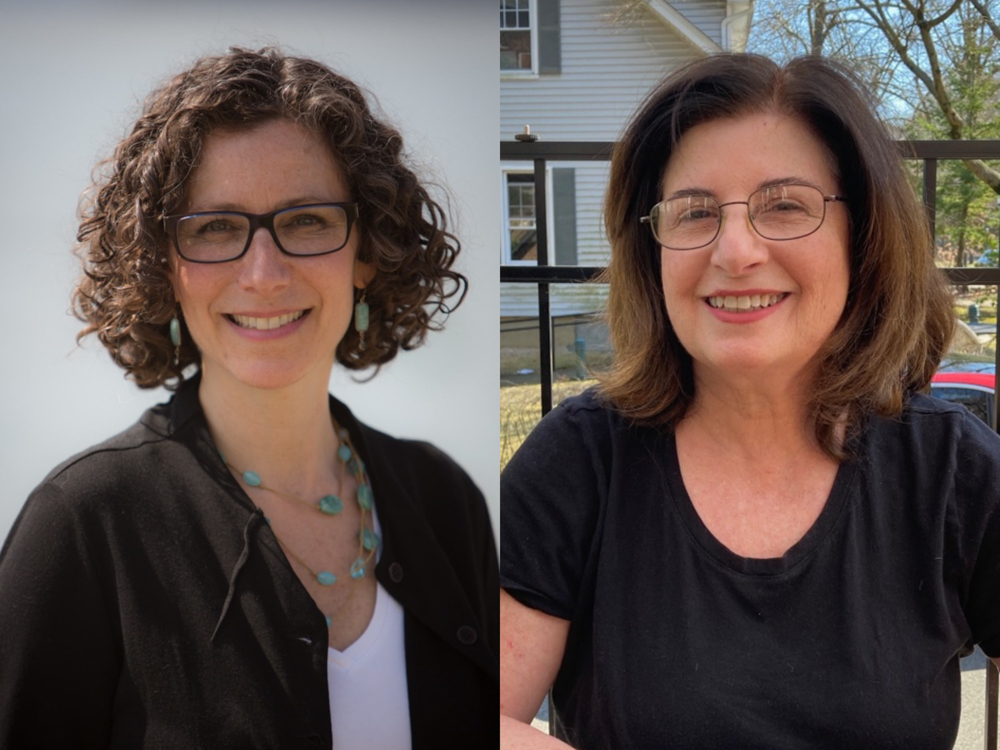 In discussing the issues facing the state and Assembly District 95, which includes Philipstown, two candidates hoping to succeed the retiring, longtime legislator Sandy Galef mention some of the same challenges.

But when it comes to solutions, Republican Stacy Halper and Democrat Dana Levenberg have differences.

Halper, who grew up in Brooklyn, says on her campaign website that she pursued a career as a musician before joining Random House, where she worked in marketing. The Briarcliff resident later earned degrees from SUNY Purchase and Manhattanville and became a music teacher in the Bronx until her retirement in 2019.

Levenberg, a native of Teaneck, New Jersey, holds a bachelor’s degree in international relations from Brown University. A former advertising and TV producer, she served nine years on the Ossining school board and is in her fourth term as town supervisor. She also worked for eight years as chief of staff for Galef, who has endorsed her. 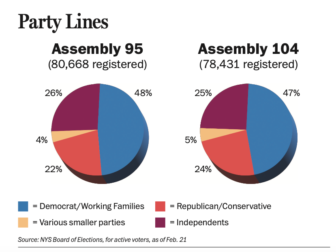 On her website, Levenberg recommends additional protections to those affected by the closure of the Indian Point nuclear power plant and “smart re-utilization” of the site to avert “an economic crisis from the loss of revenue and jobs.”

She added on Monday: “I’m working for clean air, clean water and green jobs, to bring us into a future where we are no longer dependent on fossil fuels that imperil our planet and our security. I want an economic recovery that extends to everyone, not just the ultra-rich.”

She also said that she’s “on a mission to build healthy communities in every sense of the word — environmentally, physically and mentally,” as well as economically, “all through the lens of equity.”

Jonathan Jacobson, a Democrat who represents District 104, which includes Beacon, is running unopposed for his third, 2-year term. In 2020, he defeated Republican challenger Andrew Gauzza IV, with 64 percent of the vote.

On her website, Halper calls New York tax rates “outrageous”; blasts the use of state funds for a new stadium in Buffalo; asserts that state Attorney General Letitia James “wants to not only fund low-income women’s abortions but wants to also fund abortions from out-of-state women”; and claims that Sen. Chuck Schumer, “whose pandering knows no bounds, gave $2 million to a religious group to build a fertility clinic,” a claim on which she did not elaborate.

Levenberg said that “strong public schools are central to our communities” and that she wants “to fix the Foundation Aid formula and ensure that school districts in the 95th can be fully funded without breaking the backs of our local taxpayers” and that in overseeing town budgets, as a supervisor, and school budgets, as a school board member, she has “always found ways to stay within the tax cap” imposed by Albany on increases in property taxes. 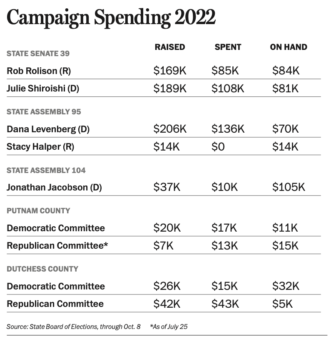 Halper advocates that schools “prepare our children in math, English, languages, history and science. We cannot turn our art classes into courses in politics; or our music classes into negating all of Western music,” she said. She also alleges that “as young as kindergarten our children are being indoctrinated into questioning their gender, their value as a person based on race and religion” and proposes that “all instruction that mentions gender indoctrination be banned from our schools.”

Emphasizing that “we must ensure our electoral process is beyond reproach,” Halper endorses requiring that every voter present identification at the polls and that absentee ballots be restricted to the elderly, disabled, military, college students and people who are out of state or country. She supports a ban on ballot drop boxes and argues that ballots “must be followed at all times until the final count, by officials of each party. Only in this way can we begin to have confidence again in our elections.”

Levenberg accused Halper of believing “people should only be allowed to vote in person on Election Day” and accused the Republican Party of “using conspiracy theories, misinformation, voter suppression and scare-tactics to push through unpopular policies that benefit very few people.” She described the GOP as having “been taken over by an extreme right-wing faction, the MAGA movement [Donald Trump’s Make America Great Again] that wants to turn back the clock to a time when most people — women, the LGBTQ community and people of color in particular — had fewer rights.”

On her website, Halper writes that “Sandy Galef has occupied this seat for 30 years, admirably. However, this is not the Democrat party of 30 years ago. The new Democrats are very far left and do not speak to the everyday working people.”

Halper advocates an end to “vaccine mandates,” saying that “even though the worst of the pandemic is over, the dangerous government precedents have been set,” and urges the state Legislature to repeal reforms that took effect in 2020 that eliminated cash bail for most misdemeanors and nonviolent felonies.

Under bail reform, she wrote, judges are “encouraged to let them go” if defendants promise to return for future court dates. Given “reports of new crimes being committed” by these individuals, she said, the state “must either hire more judges” to conduct trials “or put these people behind bars while waiting.”

Levenberg said she would like to see more attention to sustainability and cited her record as town supervisor in establishing electric vehicle charging stations, requirements for constructing energy-efficient buildings, food-scraps recycling and other initiatives.

An earlier version of this story stated that Jonathan Jacobson, a Democrat whose district in the state Assembly includes Beacon, won in 2020 with 55 percent of the vote. In fact, with absentee ballots included, he won 64 percent of the 48,000 votes cast.

One thought on “Two Assembly Candidates Each Hope to Succeed Galef”