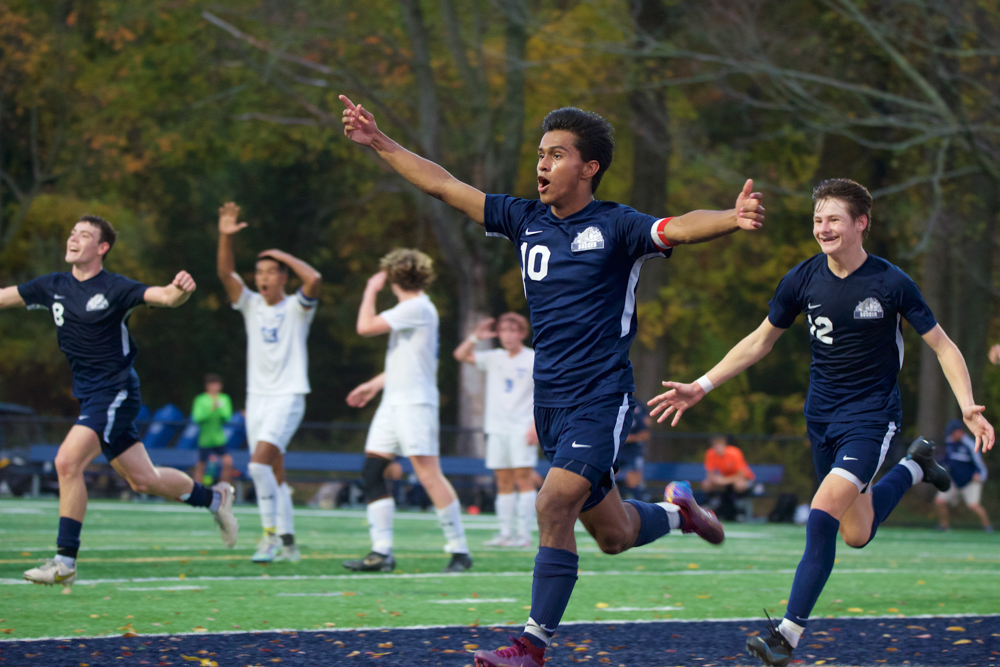 After getting outplayed in the first half, Haldane shook off the cobwebs and outscored Putnam Valley 24-0 in the second to pick up a 32-21 victory on Oct. 22 in Cold Spring.

Evan Giachinta scored on a 4-yard run in the second quarter and ran for the 2-point conversion to put the Blue Devils up 8-0. But Putnam Valley responded with three scores, including a 30-yard interception return by Ricky Meister and a 5-yard TD run by Thomas Cunningham, to take a 21-8 halftime lead.

“We got off to a slow start,” said Coach Ryan McConville. “At halftime the guys knew we weren’t playing well, so they stopped pointing fingers and we talked about making plays.”

Haldane’s defense stiffened and the offense found its rhythm. Luca DiLello picked up a fumble and returned it 38 yards for a score to make it 21-14, and quarterback Ryan Van Tassel scored the 2-point conversion on a run. Van Tassel followed with a 1-yard run in the fourth quarter (Dylan Horan ran for the conversion) and Giachinta delivered the final blow with a 15-yard run, after which Van Tassel ran for the conversion.

“Putnam Valley opened the second half with a fumble, and Luca’s scoop-and-score got us going,” McConville said. “Thomas Andrews got his first career interception, which led to another score, and our defense — led by Jake Mason, Erik Stubblefield and Dylan Rucker — picked it up.

“We did a much better job blocking and tackling in the second half and got big performances from Giachinta, Brody Corless and Horan, and two freshmen — Tomas Simko and Merrick Williams — both stepped up.”

The Blue Devils (5-2) play their final regular season game Saturday (Oct. 29) at 1:30 p.m. at Croton-Harmon (2-5), then are scheduled to take on undefeated Tuckahoe for the Section I, Class D championship at 3:30 p.m. on Nov. 11 at Mahopac High School. The two schools have the only Class D teams in the section so face each other every season for the title.

The Tigers were ranked on Oct. 26 as the third-best Class D team in the state by the New York State Sportswriters Association, while the Blue Devils received an honorable mention.

Beacon, seeded second in the Section IX, Class A tournament, defeated No. 4 Cornwall, 3-0, on Thursday (Oct. 27) for its second straight sectional title.

They reached the championship by edging No. 3 Goshen, 1-0, on Tuesday. The rivals played nearly 77 minutes of scoreless soccer at Beacon High School before the Bulldogs delivered a dramatic game-winner.

For most of both halves, Beacon had the better of possession and scoring opportunities — Andre Alzate drilled a dead-on blast that Goshen’s keeper caught cleanly, and another shot in the second hit the post — but neither team could score.

With 3:21 remaining in the game, Alzate got another chance, and this time the Bulldogs senior captain delivered as he was falling to the ground, getting his right foot on a ball as the goalie dove to stop it. The score was assisted by Gavin Ladue.

The Bulldogs defense had a strong game, with keeper Matt Sandison needing to make only three saves. Goshen had only one loss all season, to Beacon. It also had one tie, also to Beacon.

“It was very evenly matched throughout,” said Coach Craig Seaman. “Matt played an excellent game and both of our center backs — Gavin Ladue and Thomas Robinson — were excellent. Liam Murphy was excellent. Goshen is big, strong and physical, and I thought our guys in the middle did a great job with that.”

Beacon (11-3-2) advances to regional competition, where it will face the Section IV champion.

No. 3 Haldane picked up a 2-0 victory over No. 2 Leffell on Wednesday (Oct. 26) in the Section I, Class C semifinal, which was delayed for five hours and moved from Leffell to Edgemont High School because of a muddy field. The Blue Devils will face No. 1 Tuckahoe (12-3-1) at 8 p.m. on Saturday at Nyack High School for the sectional title.

Finola Kiter scored both goals for the Blue Devils (6-10) on assists by Sara Ferreira and Chloe Rowe.

Beacon received the No. 4 seed in the Section IX, Class A tournament and blanked No. 5 Wallkill, 2-0, last week on goals by Reilly Landisi and Olivia Del Castillo before falling on Monday (Oct. 24) at No. 1 Goshen, 3-0. The Bulldogs finished the season at 11-5-1. 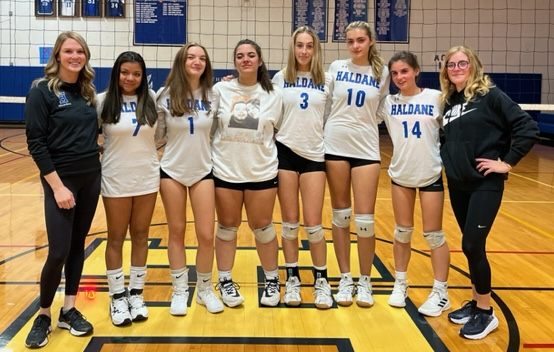 Beacon lost to Franklin Roosevelt twice and Monticello but defeated Goshen to finish the regular season at 9-9. In a 3-1 loss at FDR on Tuesday (Oct. 25), Kiki Rodriguez had four aces, Demi Sela had 11 digs, Mikayla Sheehan scored six kills and Allison Thomas had 17 assists. Against Goshen, the Bulldogs recognized their seniors: Sela, Sheehan and Sydney Jones. 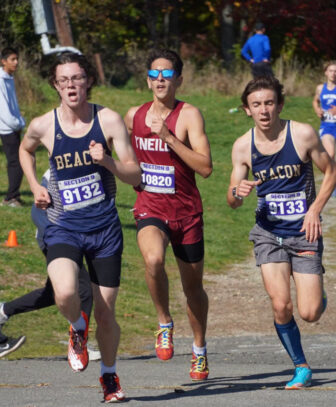 “I was reasonably happy with the eighth-place finish,” Coach Jim Henry said. “We saw some big improvement from our 4 and 5 guys [Castagna and Gupta], with each running under 19 minutes for the first time.”

Beacon will return to Bear Mountain on Nov. 2 for the Section IX championship.

Haldane hosted a cross-country meet on Tuesday (Oct. 25) on the property of the Philipstown Recreation Center and Highlands Country Club in Garrison, competing against Hendrick Hudson.