Haldane senior Ryan Eng-Wong will never forget his final year on the varsity soccer team; the standout made Blue Devil history on Oct. 8 in a 2-0 victory over Ketcham High School when he scored the 60th goal of his high school career. 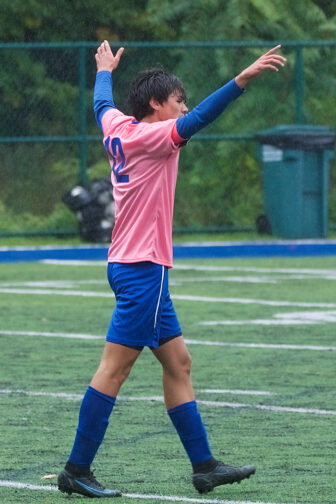 Ryan Eng-Wong celebrated the second of two first-half goals during a rain-soaked, 8-0 victory over Pawling on Oct. 4. (Photo by Skip Pearlman)

That broke a 27-year-old record held by Joe DeMarco, set in the first year that soccer was a boys’ varsity sport at Haldane. Eng-Wong, aware that he needed just one goal to break the record, said he did not expect to react because he is used to scoring. But the moment proved emotional for both him and his parents.

“I immediately ran over to my parents and gave them a hug,” he said. “It was touching.”

Although he also plays varsity basketball and baseball, Eng-Wong puts soccer first. He relishes “the energy that all the guys bring” and said that even players who do not share his passion for the sport “love to be a member of a team and create that winning culture.

“I’ve loved playing with others who go as hard as me, and the guys this season are no different from that,” he said.

That camaraderie is one of the things that fueled his love for the game when Eng-Wong began playing at age 5 in Philipstown’s youth soccer league. Even then, he was motivated to get better.

“I just get excited when I see the ball,” he said. “I am always thinking about improving my game and my touch and staying active.”

Aidan Sullivan-Hoch, a teammate, said Eng-Wong has grown a lot in the four years they’ve played together and has “brought a lot of energy to this year’s team.” Coach Ahmed Dwidar described Eng-Wong as a team player who is distinguished by more than his footwork.

“He just knows where to be in the right moment to score, and his vision off the ball makes him a great scorer,” said Dwidar.

In addition to his teammates and coaches, Eng-Wong credits his family with being supportive. His father, who has an “intense” work schedule, never misses a game; his mother sends him a “good luck text” if she is unable to attend and his older brother gives him advice after each game.

Eng-Wong scored three more goals in the season finale, a 7-2 win over Croton-Harmon on Oct. 15; four more in an 8-2 win on Oct. 30 over Hamilton for the Section I, Class C title; and another in a regional tournament win over Rhinebeck on Wednesday (Nov. 2). That brought his career total to 68.