Many people have strong feelings about Russia’s invasion of Ukraine. But it has been especially difficult for Natasha Shaginian. 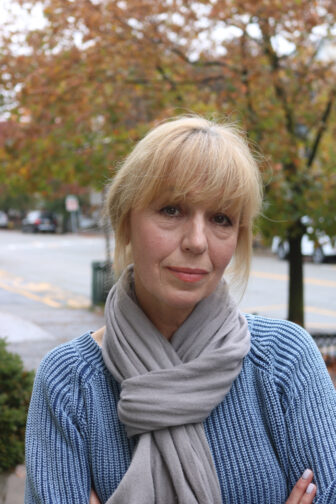 Shaginian, who recently returned home to Cold Spring after spending three months in Moscow, is the co-founder and executive director of Life in Motion (lifeinmotion-charity.org), a nonprofit that helps children in need of orthopedic treatment, including prosthetics.

Trained in Moscow in the early 1990s as a physician and psychiatrist, Shaginian worked as a consultant for orphanages and helped children with disabilities come to the U.S. for treatment. In 1991, when Russia began to allow adoptions, the U.S. Embassy asked her to connect American families with children. That led her to open her own nonprofit adoption agency.

In 1994, she and her family moved to Cold Spring, and in 1996 she opened an office for her agency on Stone Street. (She has dual Russian and American citizenship.) Shaginian estimates the agency facilitated more than 1,000 adoptions before Russia stopped allowing them in 2013, apparently in retaliation for the U.S. freezing assets and denying visas to Russians implicated in human-rights abuses.

Today her charity focuses on getting treatment for Russian children who are missing limbs. In 2019, a sister organization in Moscow opened the I Want to Walk Children’s Prosthetic Center, assisted by doctors from Scottish Rite Hospital, in Dallas, Texas, which specializes in pediatric orthopedics.

“It is the only such center in the whole of Russia,” Shaginian said. “Last year, we helped more than 80 kids with physical disabilities, not only with prosthetics but rehabilitation.”

She took Sasha to a Scottish Rite Hospital, where he received prosthetic legs. He was later adopted by an American family, graduated from Boston University and is now a lawyer. He has also climbed Tanzania’s Mount Kilimanjaro more than once. 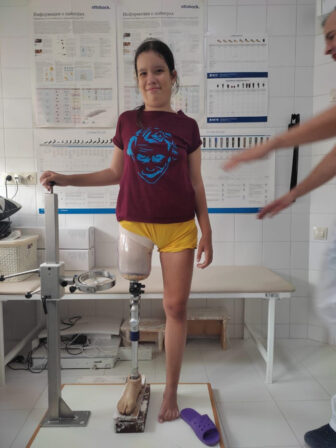 Anastasia, a Ukrainian girl who lost her leg to a bomb (Photo provided)

Over the years, Shaginian has shuttled back and forth to Moscow, most recently in July, five months after Russia invaded Ukraine. She found her colleagues depressed.

Money was tight. Many of the foreign companies that supported the program had left the country. When the invasion began, “people were shocked,” she said. “The hope was it would end soon.”

People were confused and unsure about the war, she said. “The government-controlled media did a good job brainwashing people — Instagram, Facebook, everything was shut down” and many journalists fled. Protesting could mean a 15-year prison sentence.

Shaginian said everyone within her circle of friends and colleagues is against the invasion. “But it is a horrible feeling of helplessness, of suppression,” she said. “I am a pacifist. It’s the 21st century; we have to find a way to speak with each other. My father and brother live in Ukraine. It is just unbelievable pain, unbelievable stress.”

Her niece, Vlada, is studying architecture at Dnipro University in Ukraine, where she regularly has to head to a basement shelter because of bombings. Her dream of attending Kharkiv University ended when bombing destroyed the school.

Many have chosen to leave Russia, including thousands of young men. “You see them on the train platforms or at any bus station,” Shaginian said. “When the draft started, men realized, ‘This is it.’ They did not want to go to war.”

She said that when her godson, Daniel, crossed into Kazakhstan, the line of vehicles at the border stretched for 30 kilometers (nearly 19 miles).

She said one incident brought the nature of war home to her. In May, in Donetsk, a Russian-occupied region of Ukraine, a 13-year-old named Anastasia lost her right leg to a bomb. “We urged her to come to our I Want to Walk Center for treatment and a prosthetic,” she said, adding that the girl can now walk.

Local Russian officials asked the organization to assist soldiers who had lost limbs. “I’m very sorry for any human being who suffers in war, but our mission is to help children,” Shaginian said. “If the government sends someone to war it must be responsible for the consequences.”

Only a few airlines are still flying out of Russia. When Shaginian returned to Cold Spring in October, she traveled by train from Moscow to St. Petersburg, then by bus to Helsinki, Finland.

During the wait at the Finnish border, she saw mothers, wives and girlfriends crying as the men in their lives left the country. One young Russian was turned back because he had only a tourist visa. She also saw Finns offering rides to the Russians.

“I realized that life had changed completely; that Russia is not the same,” Shaginian said. “It is my motherland, an incredible mix of culture, history, friends and family. But I can’t stand what’s happening; it’s against humanity. My heart is with my family and people in Ukraine.”

One thought on “‘I Can’t Stand What’s Happening’”