There’s a lot to look at in the woods, and as a result it can be difficult to see things that are right in front of you.

Over the course of millions of years, the human brain has evolved to deal with the riot of visual information in a dense forest by prioritizing movement. That’s good if you want to detect a bear but bad if you want to pick out a morel. As a result, it takes a while for even experienced foragers to find their first mushroom of the day. Once they do, their brains retrain themselves to notice them within the chaos. Foragers refer to this phenomenon as “getting your eyes on.” 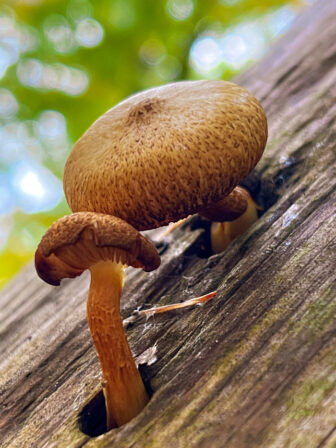 Mushrooms abound in Fahnestock (but leave them there). (Photo by B. Cronin)

There were mushrooms everywhere in Putnam County woods when Justin Allen was growing up, but he never noticed them. “I was catching frogs and riding my mountain bike,” he says as we walk through Fahnestock State Park. Then, in the fall of 2015, he ran into a mushroom that was the size of a basketball, growing on a tree at eye-level. Fascinated, he took a picture and texted it to friends.

“Great find!” one person replied. “How’d you cook it?”

Cook it? His friend told him to Google “chicken of the woods.” It’s the common name of Laetiporus sulphureus, but as Allen discovered when he harvested and cooked the mushroom, it gets its name from the fact that it tastes, and has the texture of, cooked chicken.

“I went down the rabbit hole after that,” he says, and after a few years of working his way through mushroom guidebooks — and earning certification as a mushroom forager from New York State — he decided to start taking people down the rabbit hole with him. In the early days of the pandemic, he began leading walks in the Highlands organized through a Facebook group called Eyes of the Woods.

The more eyes in the woods, the better. Foraging for mushrooms can be dangerous if you don’t know what you’re doing. Allen shows me a photo he received from a group member by text that morning that showed a handful of dazzlingly orange mushrooms that looked like delicious chanterelles. He warned them they were actually Jack O’Lantern mushrooms, known for having bioluminescent gills that glow like fireflies at night but also for being poisonous.

A glowing poisonous mushroom would be a welcome sight because at least we’d notice it. We’re nearly halfway through the hike and haven’t found any intact mushrooms. We finally spot a chicken-of-the-woods on a fallen log. “If we weren’t in a state park, that’d be dinner,” says Allen.

That’s the other educational component of his guided walks: where you’re allowed to harvest. Allen says most people don’t seem to know that harvesting on state park land is illegal, so he’s working with officials to create a series of trailhead signs.

Where is it Legal to Forage?

Allen admits that not everyone will be happy to learn the rules, because one of the joys of searching for shrooms is coming home with groceries. But there must be sanctuaries for fungi, not just for the mushrooms’ sake but for those who are searching for mushrooms to learn more about them. If you haven’t had the opportunity to find chanterelles and Jack O’Lanterns, you won’t learn to tell the difference and could make an unpleasant mistake.

Now that we’ve found one mushroom, our eyes are on and suddenly they’re everywhere. Even backtracking, passing sections that were barren of mushrooms 20 minutes ago, we see they’re all around us: turkey tails, old man of the woods, oysters, (and, weirdly enough, some actual oyster shells). “I bet there’s some under those leaves,” says Allen, and, sure enough, when we brush the leaves aside, two white wax caps emerge.

Experiences like these make it easy to see why mushrooms were so often linked with elves and other magical woodland creatures. But truth can be even stranger than fiction. After a small wildfire in Garrison this summer, Allen found a mushroom that wasn’t in any of his guidebooks. After texting friends out west, he discovered why: The mushroom is supposed to only grow on the West Coast and only appear after wildfires. The mycelium — the threadlike roots — of the fungus needs the carbon released from wildfires to send up a mushroom.

“That means the mycelium has been underneath us in New York this whole time,” Allen says, “just waiting for a fire.”

3 thoughts on “Out There: Eyes of the Woods”