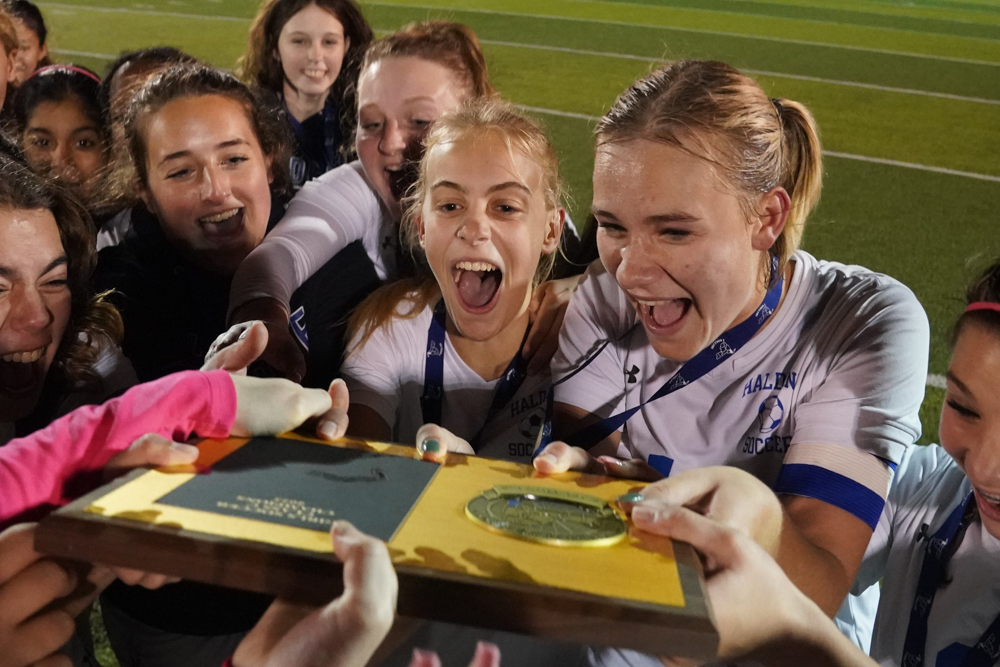 After not getting a shot on goal in the first half of the Section I, Class C title game on Oct. 29, Haldane put three balls in the net in the second half for a 3-1 win over top-seeded Tuckahoe.

It was the Blue Devils’ first sectional title since 2019. Haldane (7-10) will take on Millbrook, the Section IX champion, at 11 a.m. Saturday (Nov. 5) at Newburgh Free Academy. The winner advances to the final four.

Tuckahoe led 1-0 at the half, but 35 seconds into the second period, eighth-grader Stella Gretina tied the score on a pass from senior Chloe Rowe. Finola Kiter tallied the go-ahead goal unassisted with eight minutes left and Rowe closed things out on a pass from Sara Ferriera with four minutes to play. Ruby Poses stopped 12 shots on goal.

“We felt we had a good chance to win,” said Coach Ed Crowe. “Tuckahoe didn’t play the schedule we did [against larger schools], and we got hot at the right time.”

After winning its second consecutive Section IX, Class A title on Oct. 27 by shutting out Cornwall, 3-0, Beacon edged Section IV champions Vestal, 1-0, on Wednesday (Nov. 2) to advance in the state tournament.

Andre Alzate delivered the game-winner in the 68th minute off a pass from Brody Timm. The game was played at Maine Endwell High School in Broome County.

“The boys played fantastic,” said Coach Craig Seaman. “We gave up very few chances defensively, and created a bunch of scoring opportunities going forward. The regional finals is the furthest any team in school history has advanced.”

On Wednesday, Alzate and Miguel Ruiz were named to the All-Section team and Gavin LaDue was named to the Class A team.

Against Cornwall at Middletown, the Bulldogs got their first goal from Jaidyn Caccomo, assisted by Alzate, with 35 minutes remaining in the first half. Timm scored off an assist from Enis Dika with 7:33 remaining in the game, and Ruiz got a free kick that Alzate finished for the final goal.

When Max Westphal scored on a header off a corner kick to put Haldane up 2-0 with 26:34 left in Wednesday’s Class C regional game between Haldane and Rhinebeck, it looked like the Blue Devils had a stranglehold on a trip to the next round.

But Section IX champ Rhinebeck had other ideas, making it a one-score game 12 minutes later on a penalty kick and applying relentless pressure in the final minutes as Haldane’s defense and keeper Ronan Kiter held on for dear life, scratching out a 2-1 victory. 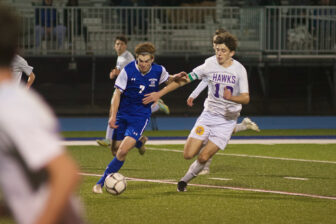 Haldane’s Clem Grossman (7) gets a step on a Rhinebeck defender on Wednesday. (Photo by S. Pearlman)

Haldane (15-2) will take on Pierson/Bridgehampton of Long Island, the Section XI champions, at 4:30 p.m. on Saturday at Yorktown High School. The winner advances to the final four.

“The guys played their hearts out,” Coach Ahmed Dwidar said. “They’ve been playing like that the whole season. We controlled the ball early, but in the second half Rhinebeck came back hard, and we expected that.” 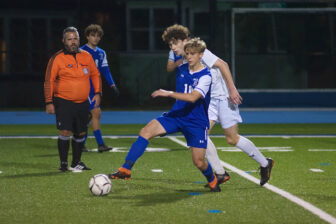 The Wednesday game, played at Hendrick Hudson High School, came at a price. Clem Grossman, one of the team’s key players, drew his second yellow card in the final 20 seconds of the game, meaning he will have to sit out the Saturday contest.

Haldane controlled play through most of the first half. The Blue Devils pressed the Hawks’ goal, hit a post and had a few nice chances before Ryan Eng-Wong banged one in off a pass from Matt Silhavy with 23:09 left in the half. 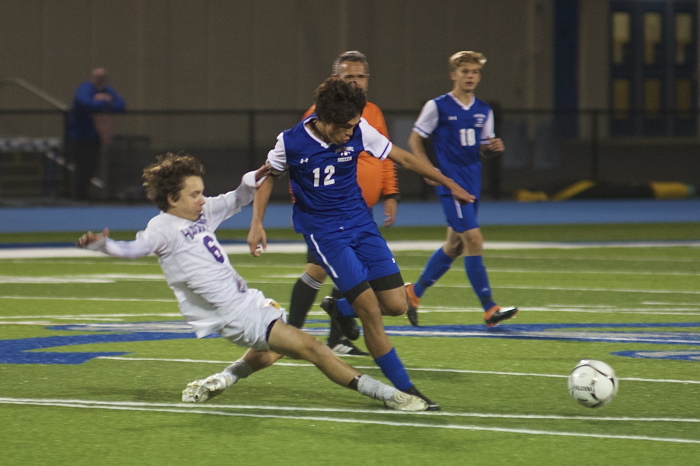 Ryan Eng-Wong eyes up a loose ball against Rhinebeck.

“Everything wasn’t going our way — there are some things we can’t control,” said Eng-Wong. “But we have chemistry and trust in each other. I have a lot of faith that we’re going to make it to the state finals. We’re trying to win it all, and that’s been our goal since the beginning of the season.”

Haldane won its first Section I title since 2013 on Oct. 30, dominating Alexander Hamilton, 8-2, at Lakeland High School. Eng-Wong had four goals, Grossman had two and Westphal and Peter Ruggiero each scored.

Eng-Wong, Grossman and defender Will Sniffen were named on Wednesday to the All-Section team for Conference 3, and Kiter received honorable mention.

Haldane continued its strong play Oct. 29 at Croton-Harmon, dominating the Tigers in a 25-8 victory that closed out the regular season.

Haldane (6-2) is scheduled to face Tuckahoe in the Section I, Class D title game at 3 p.m. on Nov. 11 at Mahopac High School.

Against Croton, Thomas Tucker opened the scoring on a 50-yard pass from Ryan Van Tassel; Evan Giachinta scored on a three-yard run; and Van Tassel connected with Michael Murray for a 15-yard touchdown strike to make it 19-0. Giachinta closed out the Haldane scoring with a five-yard run.

Van Tassel completed 12 of 20 attempts for 179 yards and Giachinta finished with 127 yards on 16 carries. Tucker had four receptions for 68 yards.