Under his proposal, which must be approved by the county Legislature, property owners will be billed $2.50 per $1,000 of assessed value, down from $2.85. The reduction marks the ninth consecutive year with a lowered county rate, which accounts for about 10 percent of property taxes.

“This is real,” said Molinaro. “It is meaningful relief for families and property taxpayers across the county.”

Next year will also be the first under a renegotiated sales tax-sharing agreement between Beacon and the county that is expected to bring the city more than $1 million in additional revenue in 2023.

Along with the property-tax cut, Molinaro touted investments in affordable housing, mental health and substance abuse services, and new programs for seniors. 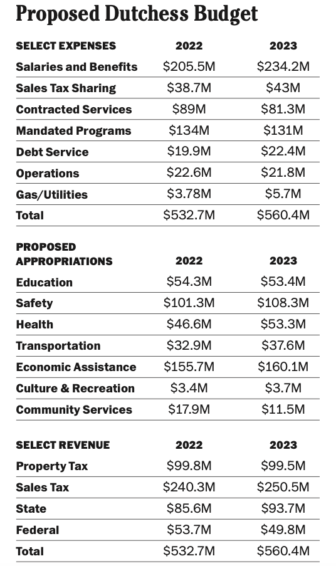 Facing criticism this year, he retreated from a proposal to spend $12 million in federal COVID relief funds on upgrades at Dutchess Stadium and announced that $9.3 million of that money, and $3 million from the county, will seed an affordable housing trust fund. The county is soliciting proposals from potential projects.

The budget proposal includes $1.8 million for long-term rehab and expanded outpatient services at the St. Joseph’s addiction treatment center in Poughkeepsie and $3 million to add 20 inpatient beds to the behavioral health unit at MidHudson Regional Hospital. In 2020, Dutchess County had the highest overdose death rate in the state, according to a report released Nov. 1 by the state comptroller.

Dutchess also would continue to fund microgrants of up to $15,000 for organizations serving veterans and allocate $240,000 in scholarships for Camp Nooteeming, a 272-acre campground in Pleasant Valley that the county bought from the Boy Scouts for $4 million this year.

Molinaro said the county plans to launch initiatives in 2023 that include a Friendly Calls program that will use volunteers to contact isolated seniors for conversation, and a task force that will collaborate with county staff and organizations in an effort to help seniors who have a problem with hoarding.

The county executive will host a Town Hall about the proposed budget at 6 p.m. on Nov. 29 at East Fishkill Town Hall, 330 Route 376, in Hopewell Junction. The Legislature is expected to consider the budget on Dec. 10.