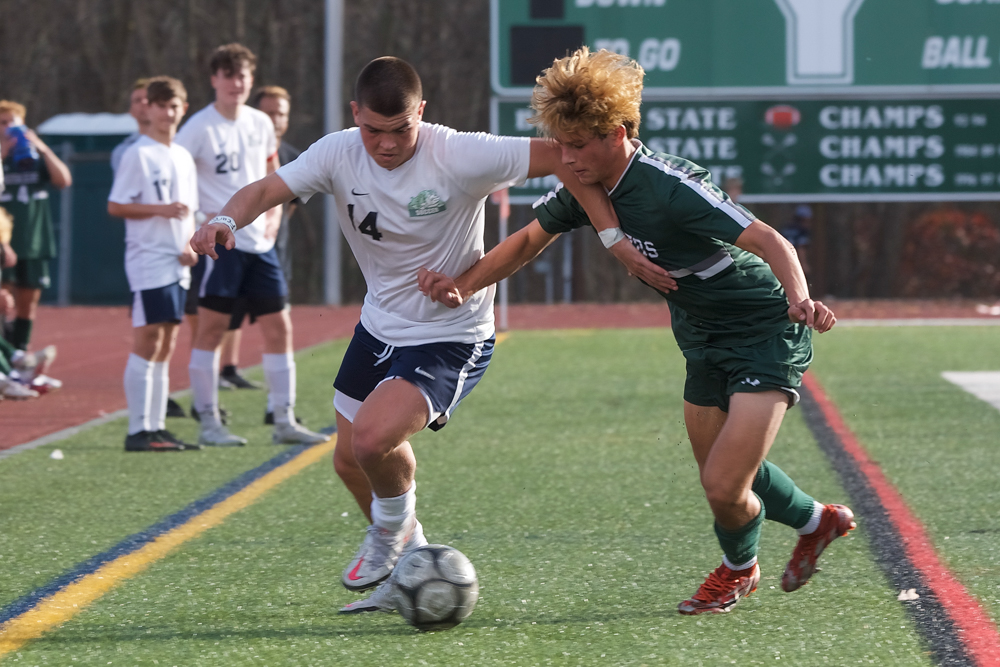 Beacon’s Avery Davis (14) fights for possession along the sideline at Yorktown High School on Nov. 5 during a win that sent the Bulldogs to the final four. (Photo by S. Pearlman)

The Beacon and Haldane high school boys’ soccer teams made history last week when each advanced to the final four of the state tournament — but both must get past undefeated opponents to play for a title.

The winners of each match will compete for a state title on Sunday in Middletown. The Class A game is scheduled for 1 p.m. and the Class C game for 3:15 p.m.

How to Watch Online

Both games will be broadcast on the NFHS Network, which charges $11.99 per month for access.

Beacon qualified for the final four on Nov. 5 with a 2-0 win over previously undefeated Yorktown on the Cornhuskers’ home field.

The Bulldogs shocked the large home crowd — and their opponents — 58 seconds into the match, when Andre Alzate sent a strong pass right across the goal to Jack Philipbar, who was in perfect position to finish.

Feeding on that early momentum, the Bulldogs clamped down on defense, with keeper Matt Sandison making an incredible save on a penalty kick and stopping a number of other point-blank shots.

“I saw the ball going through the middle halfway through my dive,” Sandison said of his crucial penalty save. “I swung away and got a foot on it. I wasn’t expecting him to go right down the middle, especially on a team like this.” 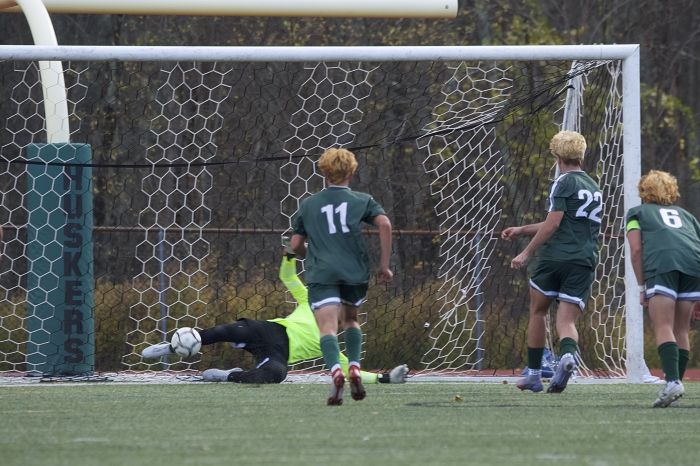 Beacon keeper Matt Sandison stops a penalty kick that would have tied the game for Yorktown. (Photo by S. Pearlman)

Yorktown sealed its own fate in the 75th minute, when a defender tried to play a ball back to the keeper but misplayed it into the goal.

“We’re ecstatic, just ecstatic,” said Coach Craig Seaman moments after the win. “To score right away was huge — it releases so much pressure. After that, I thought Yorktown had the better of play, so I made some adjustments at halftime, moved some guys around to change our shape a little bit. We absorbed some pressure, but I thought we were better organized in the second half.”

Haldane also qualified for the final four at Yorktown on Nov. 5. It defeated the Section XI champion, Pierson/Bridgehampton of Long Island, 2-0, on goals by Max Westphal. 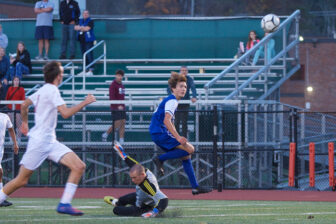 Max Westphal of Haldane chips a shot over the keeper for one of his two goals on Nov. 5 in a win that sent the Blue Devils to the final four. (Photo by S. Pearlman)

With playmaker Clem Grossman sitting out after a red card in the prior regional win over Rhinebeck, the Blue Devils knew they needed a boost.

Westphal answered the call. After a scoreless first half, the junior gathered a pass from Matt Silhavy and chipped a shot over the goalie that bounced into the net with 28 minutes remaining in the game.

“Without Clem, it was difficult,” Westphal said after the game. “We had to score on the chances we had, and we did that. We played together.”

Ahmed Dwidar, in his 13th season as Haldane’s coach, said that once Westphal scored the first goal, he had a good feeling. “We’re a first-goal team,” he said. “When we score first, we just get better. I was a little nervous at halftime. Without Clem, we had to adjust some things. But after that goal, I knew we had it.”

Dwidar said the team had last year’s loss to Hamilton in the Section 1, Class C final on their minds. “They remembered that bad taste,” he said. “That hung around. Now, the plan is to come home with a state title. This has been the best year of my coaching career, and we have three plaques so far. A state title would shake the whole community, and the boys know the opportunity they have. We just want to play our game, and have fun.”

Haldane’s playoff run came to an abrupt end on Nov. 5 with a 4-0 loss to Milbrook in a Class C regional game at Newburgh Free Academy.

Millbrook (14-3-1), the Section IX champion, advanced to the final four. The Blue Devils finished the season  at 7-11 but with a Section I, Class C title, their first since 2019.

Keeper Ruby Poses had four saves but Haldane was unable to generate many offensive opportunities against Millbrook.

“Millbrook controlled most of the play,” said Coach Ed Crowe. “We had some opportunities, such as a free kick by Sara Ferreira, but really not many. Millbrook is an athletic team with a lot of seniors, and in the end we just didn’t have it on Saturday.”

“We absolutely couldn’t have asked for anything better,” he said of the season. “We upset two [higher-seeded] teams on the way to the regionals, and we played a tough schedule. Not many people thought we had a chance to win a sectional championship.”