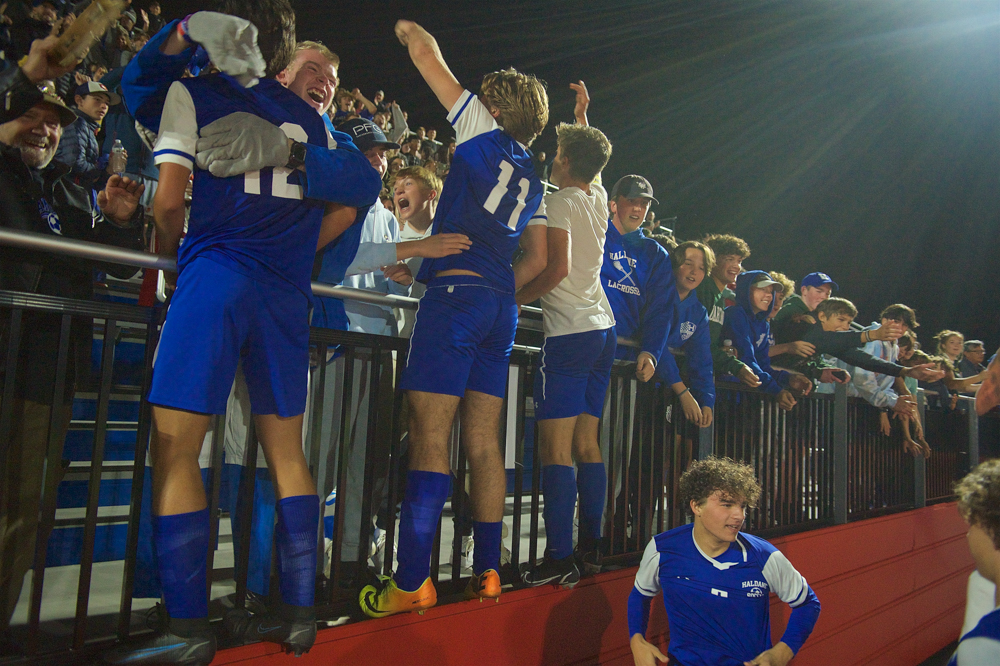 Haldane students came out in force for the semifinal game on Nov. 12 in Goshen, as well as the state title game the next day in Middletown. (Photo by Skip Pearlman)

The village was ablaze with a swirl of flashing lights from fire trucks and reverberated with the sound of wailing sirens. Philipstown overflowed in a display of love for the Haldane varsity boys’ soccer team, the school’s first male sports team to win a state championship — ever.

But the love affair with the team began before senior Ryan Eng-Wong scored with less than two minutes remaining to give Haldane a 1-0 win over Maple Hill, and the title, on Sunday. Haldane is small in population compared to other Class C schools, but it boasts an incredibly vocal student section.

“The Haldane student section just cannot be replicated by any other school,” said Amelia Alayon, a sophomore. “Because we’re so small, when we make big accomplishments, it means all the more to everyone.”

Luca van Dommele, a senior who plays right wing for the soccer team, added: “Our fans are unmatched. With the energy that they bring to the games, they help the team get through the season.”

While cheering on the team during the final, and the semifinal match Nov. 12 against Avon, students in Haldane’s raucous student section talked about a broader community connection, with some saying they attend games to encourage lifelong friends and others to boost school spirit and forge new connections.

In addition, said senior Celia Drury, “post-COVID, everyone’s really trying to get back and regroup” from a time when Haldane’s teams had to play without fans. “I never had a real ‘high school experience’ because everything got shut down freshman year,” she said.

During the pandemic, the school adopted a pass policy for sports attendance, distributing two passes to each player, who usually reserved them for family members. Although safety warranted the decision, and some support was better than completely empty stands, contests took place without the fervor of rowdy high schoolers. For players and their fans, the policy was particularly painful.

Eng-Wong, whose title-winning goal on Sunday increased his school-record career mark to 69, said that competing without fans “was the worst.” But, said van Dommele, the empty stands pushed players to get better.

“Then, when the fans did eventually come back, we could give them a show,” he said.

Now, the crowds are back, along with a newfound swell of enthusiasm exemplified by the introduction this year of the crowd’s newest commander — the Blue Devil mascot. Matthew Junjulas, a senior widely viewed as a candidate for having the most school spirit, wears the full-body suit. During games, he rouses the masses to sing along to renditions of tunes such as the “Blue Devils Anthem.”

Junjulas partly attributes the flood of positive energy to the close-knit class of 2023, which frequently arrives at games equipped with a megaphone and personalized signs of support.

“Our senior student section is probably one of the greatest we’ve ever had,” said Junjulas. “We’ve grown together. We all build off each other’s energy, and we figured it would be perfect to do it now.”

The soccer players fed off that energy, which some say has grown with the team’s success. Even before the pandemic, when “we weren’t good,” watching the boys’ soccer team was not that popular and “no one really came out to watch us play,” said senior Aidan Sullivan-Hoch.

That changed as the team improved. And after Sunday’s success, it is harder for residents not to know the team.

“The culture of Haldane has changed drastically in the four years I’ve been here,” said Eng-Wong. “Everyone is coming together and being more friendly to each other, and everybody enjoys supporting each other nowadays.”