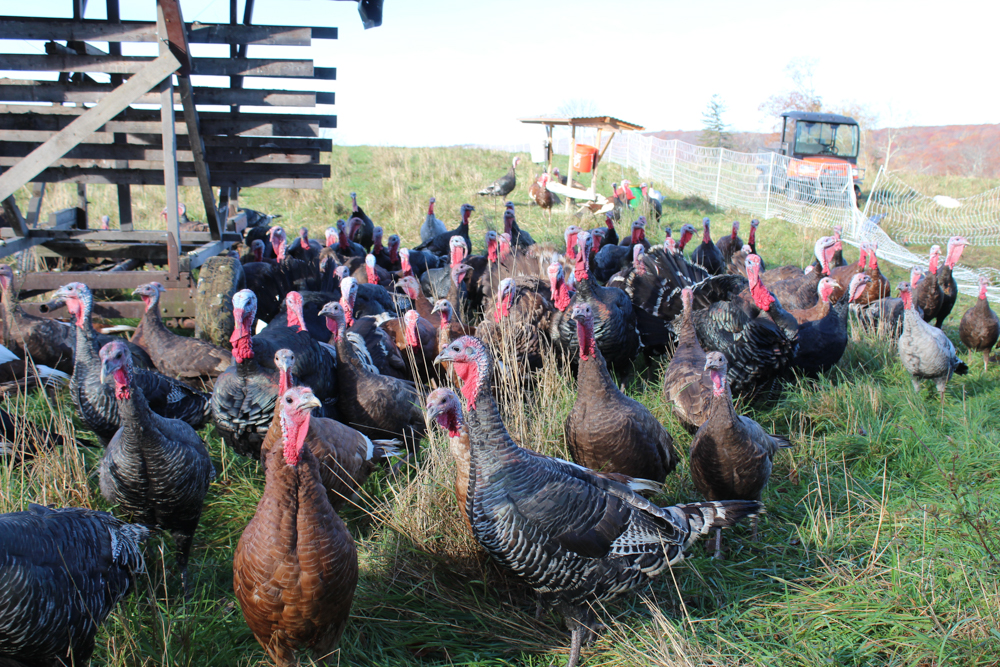 Glynwood is raising 200 turkeys this year, rather than the more typical 30 to 50. (Photo by L. Sparks)

They strut and peck and gobble, puffing their feathers and moving in unison as Nicole Scott and Maddie Morley pay a visit, after first removing an electrified net that keeps predators like raccoons and weasels at bay.

Some of the turkeys are coated in black feathers and others white or brown or mixed colors, and they descend from once-endangered breeds with names like black Spanish, blue slate, bourbon red and standard bronze.

They arrived in April at the Glynwood Center for Regional Food and Farming in Philipstown as day-old poults, said Scott, the associate director of livestock production. The farm is raising 200 turkeys this year, rather than the more typical 30 to 50.

“It was a big step this year to raise this many birds and to go with these breeds instead of the broad-breasted,” said Scott. “It was about being able to feed our community and supply folks with good and nutritious pasture-raised turkeys.”

Most people cooking turkeys for Thanksgiving will buy birds raised in relative confinement at commercial operations and sold at grocery chains. Those prices are expected to be slightly higher this year because of factors like the avian flu and steeper prices for feed and other supplies.

But a few residents will stay local, willing to pay even higher prices for the gourmet turkeys, and alternative holiday meats such as lamb, that Glynwood and other local farms raise in their pastures.

Along with raising four times as many turkeys this year as is typical, Glynwood is for the first time selling Heritage breeds, descendants of wild turkey varieties pushed to extinction by the mass production of birds bred to be meatier and sold en masse.

In addition to traditional turkey and ham, Marbled Meats on Route 9 in Philipstown is accepting orders for beef, lamb, and wild boars, along with game birds like capon, duck and pheasant.

Prices are up 30 percent across the board, said Chris Pascarella, for various reasons. As for demand, “the last few years, it’s so hard to even judge or compare,” he said.

“The first COVID year, we were still busy but people did very small birds and small gatherings, and then the following year, it grew a little bit but at the last minute we had a bunch of cancellations. The last few years have been all over the place.”

Commercially raised broad-breasted turkeys, which generally do not have the freedom to roam like pasture-raised birds, reach an average of 32 pounds over 18 weeks, while Heritage breeds take 24 to 30 weeks to reach a marketable weight. Heritage turkeys can fly and mate, whereas broad-breasted ones need to be artificially inseminated.

Because baby turkeys need dryness and warmth, Glynwood kept its poults in a brooder with dry bedding and heat lamps, said Scott. To accommodate the larger flock, the farm built a larger feeder and mobile roost, where the turkeys sleep off the ground. The system is moved weekly to shift the turkeys to fresh grass. 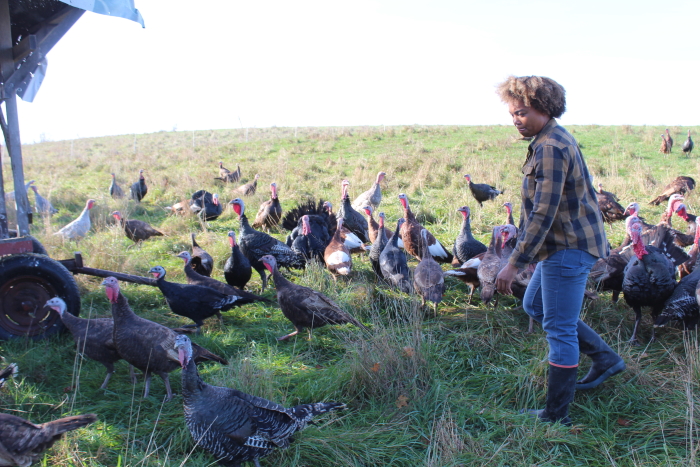 Nicole Scott, Glynwood’s associate director of livestock production, walks among the Heritage turkeys being sold by the farm. (Photo by L. Sparks)

The birds, which sell for $12 per pound, will be “a lot more flavorful” and have more dark meat compared to broad-breasted turkeys, said Scott. Glynwood is taking orders online for the turkeys, which will range from eight to 16 pounds and will be harvested and ready for pick up on Nov. 22.

“Since we’ve been growing them for a longer period of time, and they are foraging for a lot longer, you generally have a more-complex taste,” said Scott.

Marbled Meats also sells pasture-raised products, such as ham from Meili Farm in Amenia and Gibson Family Farm in Valley Falls; lamb from Kinderhook Farm in Valatie; and turkeys from Oink & Gobble Farm in Interlaken. The wild boar, Pascarella said, are from a population-control program based in Texas and Canada.

“We shifted gears a little bit because the prices went so high and we had to absorb it,” he said. “We passed on to the customer a slight amount compared to how much they’ve gone up.”

The recent drought affected prices by lowering the production of corn, which is used in 95 percent of livestock feed, according to the U.S. Department of Agriculture.

Whitney Vos, the assistant manager for Woven Stars Farm in Ghent, which sold products at Obercreek Farms in Wappingers Falls this summer, said that grain prices have affected everyone and that “often prices shift more quickly than decisions can be made about breeding and animal numbers for the year.”

Woven Stars raises beef, chicken, lamb and other animals. Many of its products sell out for Thanksgiving, she said, when people expecting a small crowd may opt to cook a large chicken or several smaller chickens instead of a turkey.

“Inflation has affected many areas, but feed for animals is not an area we can skimp on,” said Vos. “It’s just not feasible for small operations with narrow margins to afford it if prices continue to climb.”