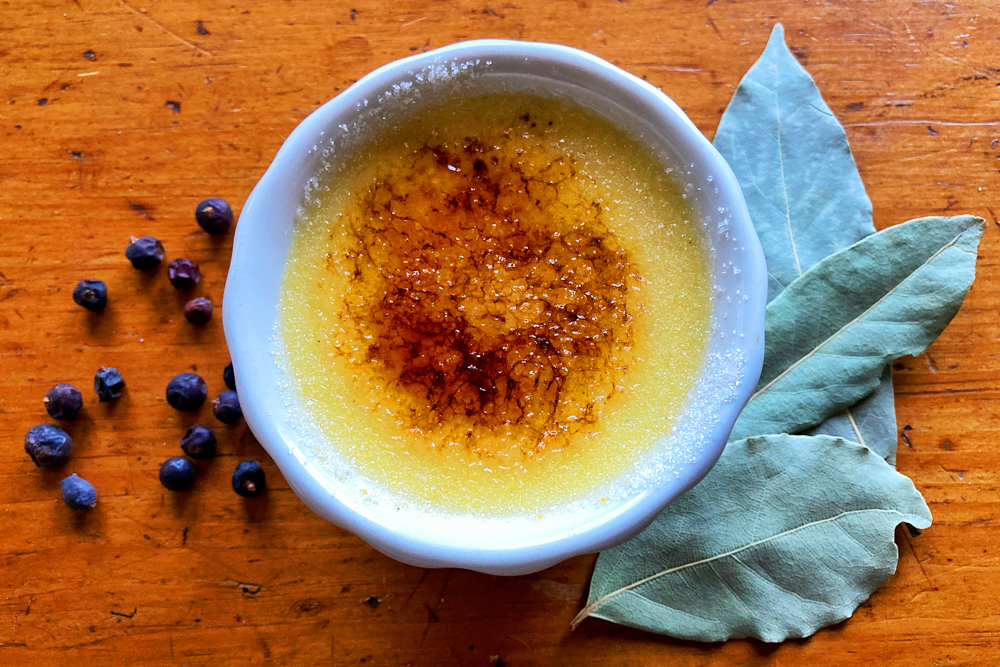 As small, good things go, there are few smaller and “gooder” than crème brûlée, the burnt sugar crusted and oh-so-rich custard familiar to Francophile foodies worldwide.

With basically four ingredients — cream, egg yolks, sugar, vanilla — and incredibly simple to make, a proper crème brûlée is incredibly rich and possibly overindulgent, if not downright decadent. In other words, the pluperfect end to a perfect holiday meal.

Perhaps, also a bête noire to cardiologists and boon to weight-loss specialists and postseason gym membership drives. Sure, you can easily find recipes for lighter custards — substituting half-and-half, or whole- or lower fat-milk for some of the cream, some whole eggs for the all-yolk version — but what’s the point, really?

This is no time for virtue! Look, crème brûlée is not meant to replace lighter fare — it’s an indulgence for feast days and special occasions and no amount of guilt could deny how satisfying a couple of spoonfuls can be.

Vanilla is the classic spice for custards in general, but for this holiday version we’ve made a couple of additions: Turkish bay laurel leaves and juniper berries.

Bay may seem an odd choice, but surprisingly there’s a tradition of scenting custards and puddings with the spice. It’s usually thought of as a savory spice for stews and long-cooked braises. But for dessert custards the cream is infused with cracked dried leaves which are strained out after a short warm steeping.

Be sure to use Turkish bay leaves, as opposed to the California variety. (They’re usually labelled, but Turkish leaves are shorter and a bit rounder than typically long and slender California leaves.) California bay is also a bit strong —some say medicinal — while Turkish leaves impart a light herbal and slightly floral top note to vanilla’s soft but solid base.

Even more unlikely is the addition of juniper berries, a spice associated with northern and Eastern Europe, particularly in game cooking. It’s not really a berry but the smooth seed cone of juniper, an evergreen conifer shrub (or small tree), and as such the crushed “berries” impart a resinous, slightly citrusy aroma (most familiar from gin, the alcoholic infusion which most bears its distinctive flavor and odor) that fills in the heart notes of this aromatic accord.

The custards, strained and cooked in a bain marie, are cooled, then chilled. This can all be done well ahead of time — up to a couple of days — and honestly, the result as is would be perfectly satisfying, presented as pot de crème. That’s nothing to turn your nose up at, but it’s not nearly the festive delight of crème brûlée, its smooth, rich, cool interior concealed under a warm shard of à la minute caramel, a true treat for the senses.

1. Arrange four ramekins (4 to 6 ounces each) in a baking pan large enough that they don’t touch. Pour cream into a 1-quart saucepan; bring to a simmer over medium-high heat. Split and scrape the seeds from the vanilla bean and add to the simmering cream. Add bay leaves and juniper berries. (Note: If substituting vanilla extract, it is added later.) Stir to incorporate spices briefly. Remove pan from heat, cover and let steep for 30 minutes. While the cream/spice mixture steeps, in a medium bowl whisk together egg yolks, ½ cup sugar, salt and vanilla extract (if substituting for vanilla bean) until smooth.

2. After 30 minutes, strain cream/spice mixture through a fine sieve into a large measuring cup, pressing down on the herbs to extract all liquid from the leaves. Lightly whisk infused cream into the egg/sugar mixture to incorporate. Strain all again through the sieve, back into the large measuring cup. Pour custard into ramekins, filling almost to the top. Being careful to not disrupt the ramekins, pour in enough hot water to come about ½ inch up the sides of the ramekins (to promote even overall temperature and cooking).

3. Set pan on the center rack of oven and bake at 325 degrees until just set, 30 to 35 minutes. (Don’t let the custards bubble. You want them a little wobbly, not overcooked.) When just barely set, remove pan from oven and ramekins from the pan. Remove cups from the water bath and cool. Cover each with plastic wrap and refrigerate until chilled (for at least two hours and up to two days).

4. To brûlée before serving, preheat broiler to high with rack 4 to 5 inches from heat source. Sprinkle surface of custards evenly with a thin layer of remaining sugar (about ½ tablespoon each). Place ramekins on a sheet pan and broil, turning pan occasionally to promote even browning, until sugar bubbles and creates a consistent caramel crust. Serve, still warm and fragrant.

Note: If you have access to a small propane torch, you have much better control over the outcome. Using a medium-to-low flame hold the torch 4 to 5 inch from the evenly sugar-dusted custard. Move the torch in a back-and-forth or circular motion over the surface, first melting the sugar and then carefully controlling the browning on each individual custard.

A previous version of the recipe did not include the oven temperature in Step 3. It now reads "Set pan on the center rack of oven and bake at 325 degrees until just set, 30 to 35 minutes."