At the Garrison school board meeting on Oct. 26, the district clerk, Dusti Callo, performed a song she had written earlier that day to the tune of “You Are My Sunshine” to mark New York State School Board Recognition Week.

“It was kind of a last-minute decision,” she recalls. “I sat here for 10 minutes and came up with something that seemed to work and practiced it a couple of times.”

It brought down the house — or, in this case, the Learning Commons.

It was Callo’s second performance at the school. She sang the national anthem at the eighth-grade graduation ceremony in 2021, and many of the parents and teachers in the audience were stunned by her ability.

“People don’t know this about me,” said Callo, 53, who is also secretary to Superintendent Carl Albano. But she has been singing her entire life. “My mom said I was singing before I was talking.”

(Callo, who has been with the district since 2020, is also an accomplished woodworker — she made a speaker’s podium and table with wood salvaged from a renovation project at the school.)

As a teenager, Callo hoped to pursue a career in country music, inspired by her idols, Naomi and Wynona Judd. But in 1995, those ambitions were put on hold when she moved with her then-fiancé, Fred, to the Hudson Valley.

Once in New York, she started singing. “The Star Spangled Banner” at minor and major league baseball and football games, including for the Yankees, Mets, Jets, Giants, her beloved Buffalo Bills and the Hudson Valley Renegades, the minor league baseball team that plays at Dutchess Stadium.

Singing runs in the family. Her grandfather, Elmer Bradford, sang cowboy songs as a trail guide at the Grand Canyon. He also performed with Mel Tillis and led his own band, the Rhythm Rangers.

“I remember many, many hours sitting in the living room listening to grandpa play the guitar,” Callo said.

She grew up a country girl in the Ozarks in West Plains, Missouri, near the Arkansas border. Her family had horses and listened to Patsy Cline, Ray Price, Loretta Lynn, Dolly Parton and Reba McEntire.

After her parents divorced when she was 10, her mother relocated to Las Vegas to start a new life. “She packed up four kids, two dogs, two cats and 13 horses, and off we went,” said Callo. 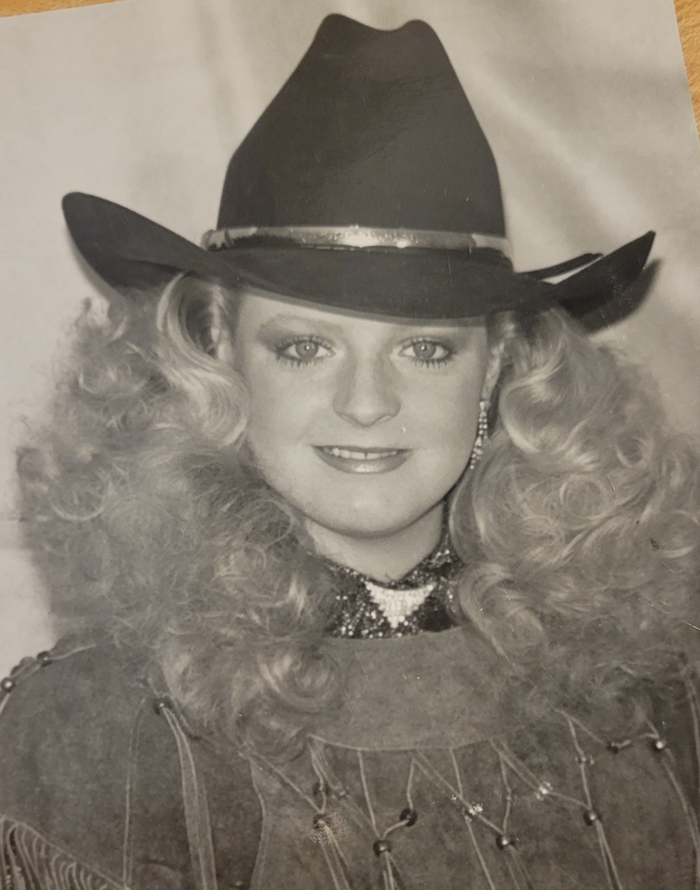 In Vegas, Callo competed for rodeo cash and belt buckles in barrel racing and calf-roping. One specialty was goat-tying, which, she explained, involves a procedure she called “flanking the goat.” That means racing down the arena, jumping off the horse, grabbing a goat, flipping it on its side and tying up three of the goat’s legs.

When she was a teenager, Callo started singing the national anthem at Helldorado Days and other professional rodeos. But it was when the National Rodeo Finals moved from Oklahoma City to Las Vegas that she started her career.

“During those 10 days, anyone who is anyone in country music was performing,” she said. Beginning in 1987, as part of a growing demand for country music acts in Vegas, she was hired to perform at the Olympic Lounge at Caesars Palace and country music dance halls.

She sang standards by Trisha Yearwood and The Judds but says her showstopper was “Crazy,” by Patsy Cline. “That was the one that usually brought the house down,” she said. 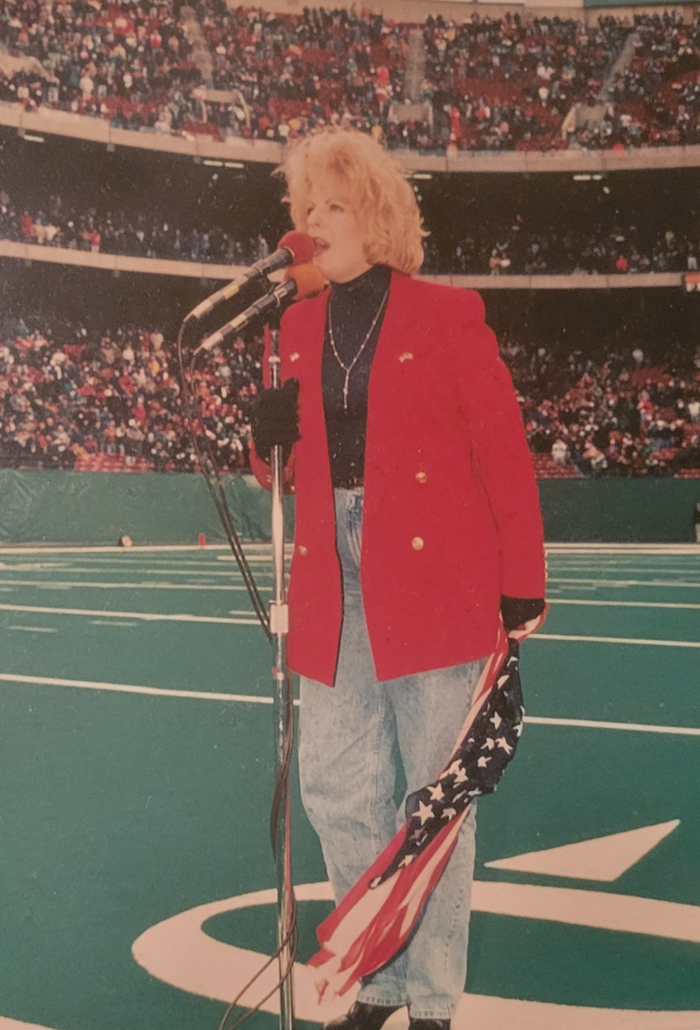 In the early 1990s, she attempted a recording career, and to build her reputation, working with producer George Dare. She also tried out for the traveling show, Legends in Concert, showing up dressed as Wynona Judd. Unfortunately, “at that time The Judds weren’t legends enough,” said Callo.

Soon after meeting Fred — now her husband — they decided to move to Marlboro, in Ulster County, where she lives now. She said the Hudson Valley reminds her of her childhood in the Ozarks. Her husband got a position in food services and she took a position as an office manager.

Shortly after they arrived in New York, Fred suggested that Dusti could get gigs singing the national anthem.

He became her promoter, calling major league teams to see if they needed people to sing the anthem.

“The challenge singing in big stadiums is the sound delay,” says Callo. “In the old Yankee Stadium, the speakers were located in center field, which was 400 feet away. You’d sing a line and hear it behind you. That could be nerve-wracking.” 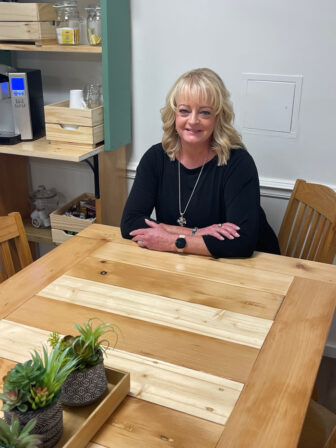 Callo sits at a table she made for the faculty lounge from boards reclaimed during a recent renovation at the school. (Photo by J. Asher)

In 1998, during a visit to sing the national anthem for a minor league baseball team, the New Britain Rock Cats (now the Hartford Yard Goats), Callo took note of the team’s theme song. With her husband’s persistent engagement, she sat down to write one for the Hudson Valley Renegades, “Renegade Fever,” which the team played for a while at The Dutch.

Last summer, the Renegades revived the song, said Joe Vasile, the director of media relations and marketing. He said learning that the team had a theme song that wasn’t being used was “a great discovery.”

Along with school board meetings, much of her singing these days takes place at Milton First Presbyterian Church in Ulster County.

Callo said she believes her voice has improved with age. “I have more control,” she says. “There’s something that comes with living life.”

Her control was on full display recently when she sang at the funeral of her uncle, the Rev. Butch Bradford, at a Baptist church in Phoenix. She performed the hymn “Softly and Tenderly” and says she was amazed at the connection she felt with the congregation.

“It was one of those moments where something else took over,” she says. “I wondered where that voice was coming from.”