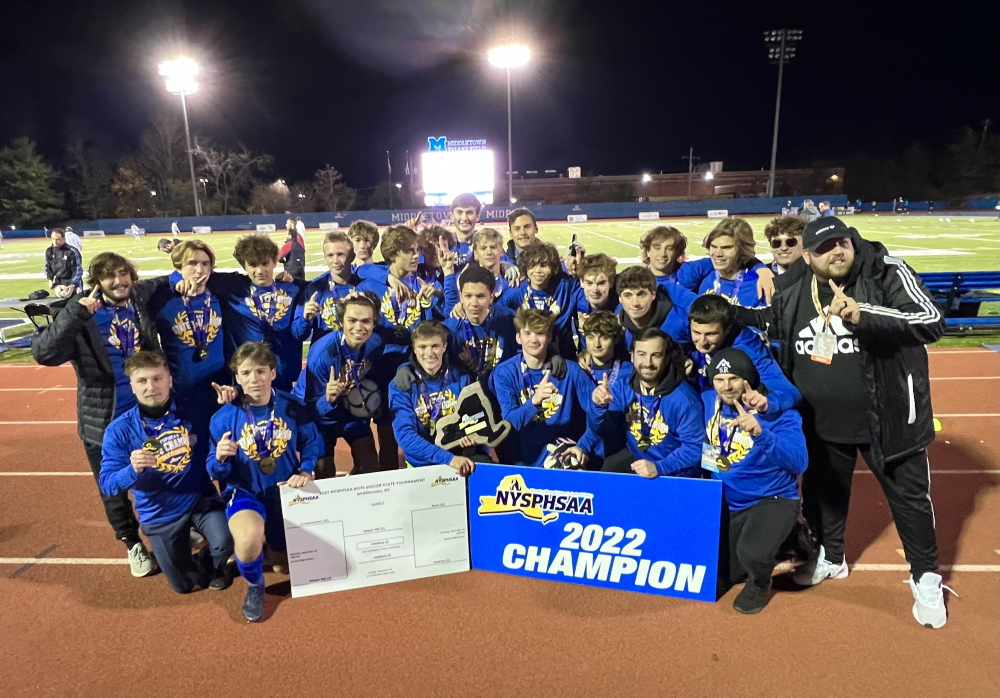 After 78 minutes of scoreless soccer, it looked like the teams were headed for overtime.

But in the final 90 seconds, the Blue Devils’ relentless pressure paid off when Clem Grossman chipped a pass over the defense from behind, and Ryan Eng-Wong — with his back to the goal — played it off his chest, then turned and shot it past a diving goalie.

It was the first state championship for any Haldane boys’ team, and the first for the school since the girls’ soccer team won the Class C title in 2014. (The girls also have won five in basketball and four in volleyball.)

Eng-Wong had found the back of the net on a header five minutes earlier, but the goal was negated on an offsides call.

“There’s no feeling like it,” Eng-Wong said after the win. “We put so much work into this. Everybody was backing us up. We played with so much heart today. That’s the way it’s been the whole season — one of our best players goes down [captain Will Sniffen, injured late in the game] and we kept playing through it, through all the adversity. That’s what champions are made of.”

Coach Ahmed Dwidar has said all season that his squad is a “first-goal” team. Once the Blue Devils score first, they believe the game is theirs.

“It’s pretty amazing, that’s all I can tell you,” Dwidar said. “In the 78th minute of a scoreless game, all you can do is pray for a goal, and it came at the right time.”

Maple Hill, located in Castleton in Rensselaer County, finished its season at 20-2-1. It also lost in the finals last year, 1-0, to Hamilton, which had defeated Haldane for the Section I title.

Haldane ended the regular season at 13-2, with losses at Hastings and Peekskill, before winning its first Section I, Class C title since 2013. It finished 18-2.