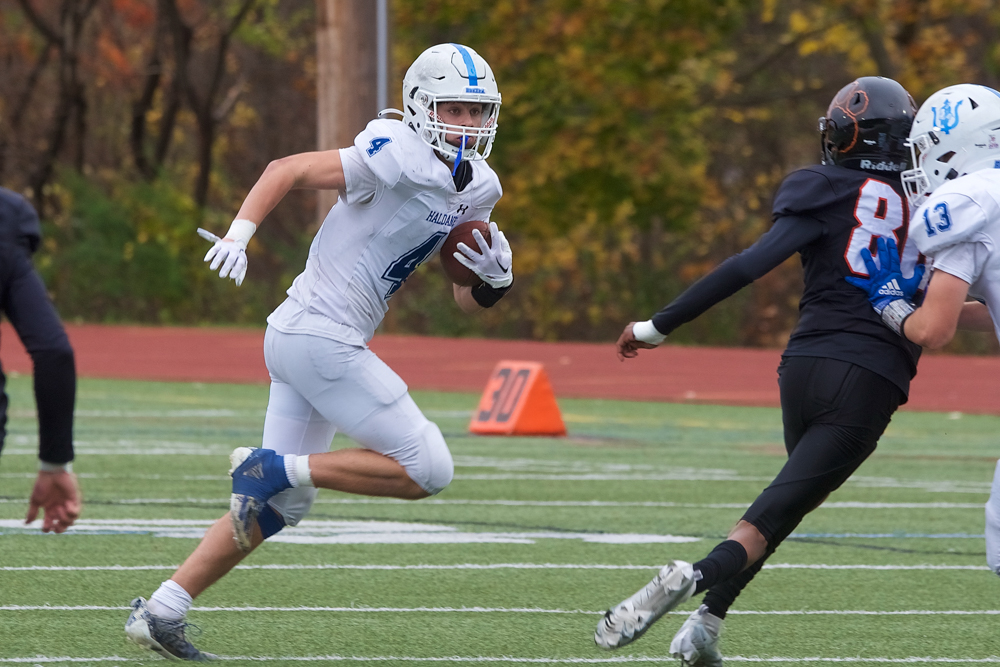 Michael Murray eyes up a Tuckahoe defender on Nov. 11 during the Section I, Class D title game at Mahopac High School. (Photos by S. Pearlman)

Haldane’s title dreams went down early on Nov. 11 in the Section I, Class D championship game at Mahopac High School. Top-seeded Tuckahoe overwhelmed the Blue Devils from the start on its way to a 47-20 victory.

Tuckahoe set the tone on the game’s first play with a 59-yard touchdown pass. The Tigers followed up quickly with a touchdown run for 14-0 lead that was stretched to 41-13 on a Tuckahoe score 11 seconds before halftime.

It was Tuckahoe’s third consecutive title. The teams are the only Class D schools in the section, so play each year for the championship.

Haldane’s first-quarter score came on a 60-yard kickoff return by Evan Giachinta (to make it 20-6), and the junior running back added a two-yard run for a TD in the second  quarter that made it 27-13. But Tuckahoe added a pair of scores to pull away by halftime.

Giachinta finished with 154 yards and a pair of touchdowns on 16 carries and had three receptions for 50 yards. Quarterback Ryan Van Tassel completed 6 of 12 attempts and Michael Murray had two receptions for 27 yards.

Coach Ryan McConville said his team knew how good Tuckahoe was, and had a plan. “We knew they were a fast and physical team,” he said. “We were in the right spots, but their guys made plays and beat us in a lot of one-on-one matchups. We expected a competitive game. But they made a lot of big-time plays.

“Down 14-0, we’ve been there before,” he added. “But now we have to bounce back, and it changes your game plan. We had to throw the football, try different runs. And as it gets worse, you go into an attack mode, throwing more than you want to.”

Haldane has gone 7-1 at home over the last two seasons, and McConville mentioned the team’s homecoming win in overtime against Blind Brook and a comeback win over Putnam Valley — where the Blue Devils were down 14 points — as season highlights.

“Guys like Evan, Ryan, Luca DiLello, Dylan Rucker, Erik Stubblefield, Michael Murray, Thomas Tucker — they made plays throughout the year, and they all had a nice season for us,” McConville said.

Tuckahoe (9-0) advances to a regional final today (Nov. 18) at Arlington High School, taking on the Section VII champ Moriah, with the winner advancing to the final four. Haldane ended its season at 6-3. 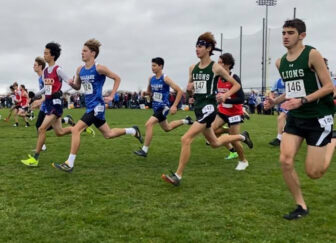 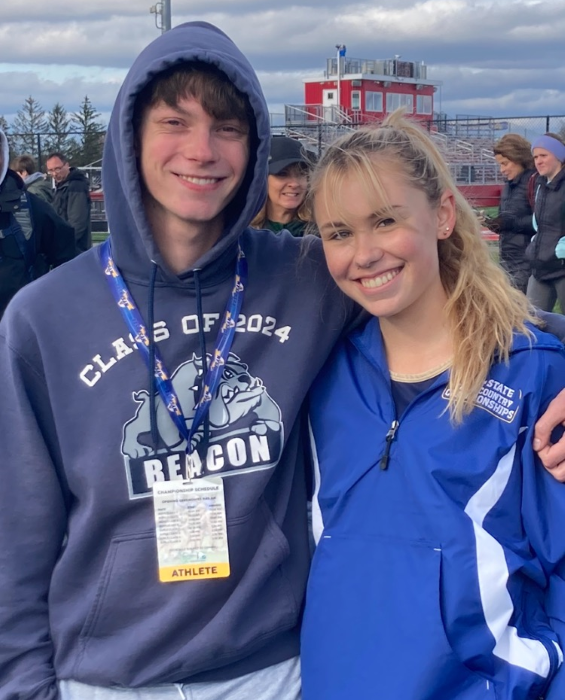 For Beacon, Henry Reinke finished 43rd in the Class B boys’ race and Rachel Thorne finished 102nd for the girls.

“Henry got out well and held on to that position to finish 15 to 20 places ahead of where he was seeded,” said Coach Jim Henry. “Rachel was not quite as pleased with her outcome. But I was impressed that she qualified to get here. Sometimes it’s hard to follow up a great race with an even greater one.”

Henry said his team had a strong fall. “We’re only losing a couple of seniors in our top seven, so I think we’ll have an excellent chance to improve next year,” he said.

Liv Villella, a Nelsonville resident who is a senior at Haldane, signed a letter of intent on Nov. 9 to play soccer next year for Georgetown University. Liv is a defender with World Class FC. 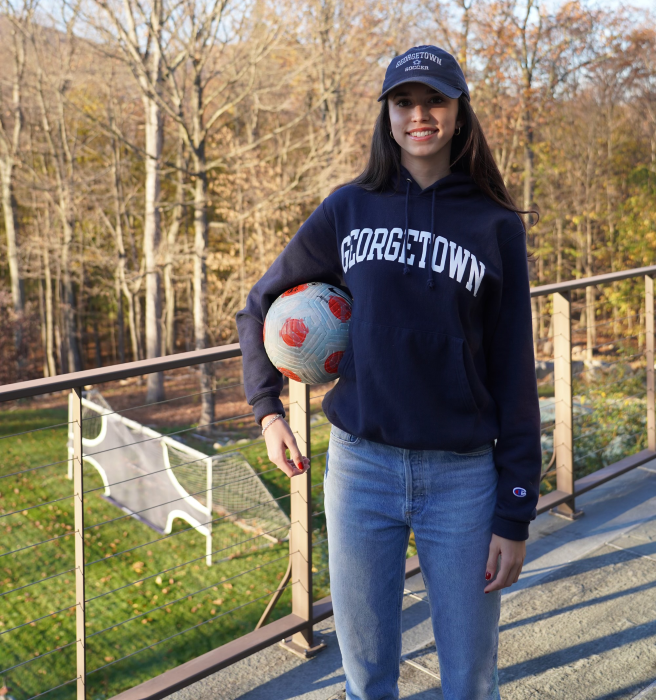