COVID rates steady but flu and RSV on rise

Local and state health officials are warning residents to protect themselves from a trio of respiratory illnesses as the cold weather forces people indoors and families and friends prepare to gather in groups during the holidays.

As of Tuesday (Nov. 22), new reported cases of COVID-19 remained relatively flat. Health officials and hospitals are instead confronting the seasonal rise in infections from the flu and a surge in respiratory syncytial virus (RSV) cases. The latter typically emerges in the fall and winter to cause a cold-like illness, but it arrived earlier this year and with a greater spread, especially among children.

Doctors began reporting increased infections from RSV in the summer, according to state data. Symptoms include a runny nose and cough, and infants born prematurely and older adults with weakened immune systems can become seriously ill.

Dr. Peter Gergely, a pediatrician based in Garrison, said a super-virulent strain of the virus is infecting children at a level he has never seen and infecting younger children, including newborns.

“Three-week-old infants are coming in with positive RSV,” he said. “We never used to see that.”

The symptoms are also worse, especially the coughing, and infected children are not responding as well to treatment with nebulized medications, said Gergely. “Even up to two months, kids are still coughing, but they’re not sick anymore,” he said.

Health officials have prepared for a surge in COVID cases this fall and winter, but measuring the extent of an outbreak is difficult because people using home kits are not required to report positive results. Dutchess is one of the counties encouraging them to do so. (See bit.ly/report-dutchess-results.)

There were small upticks in COVID-19 infections reported in May, July and September following last winter’s record-setting outbreak driven by the Omicron variant of the virus that causes COVID-19.

New York still reports each day the number of new infections confirmed by laboratory testing, and the percentage of tests that are positive. A CDC study of 11 million home-test results showed that their positivity rates largely mirrored the rates reported by laboratories. But the tests it studied “likely reflect a small fraction of the number of self-tests used,” said the agency. 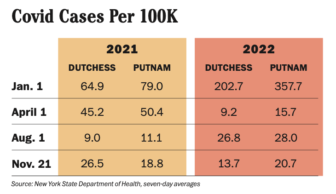 Because more people are using home kits, and places offering rapid tests only have to report positive results, New York considers cases per 100,000 residents to be a more reliable data point for measuring trends with COVID.

Despite the falling case levels, both Dutchess and Putnam counties still had the highest positivity rates (the percentage of tests that are positive) among the seven counties in the Mid-Hudson Region.

Deaths have also slowed because of vaccinations, immunity from infection and better treatments, but COVID remains the third-leading cause of death in the U.S, according to the CDC. In New York, people 60 and older represented nearly 87 percent of the state’s 59,299 deaths from COVID as of Tuesday. 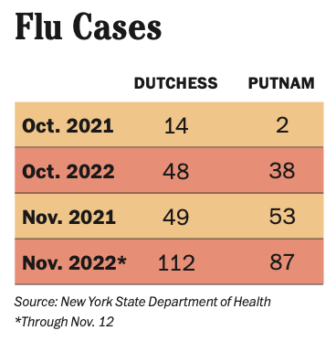 The state reported 64 flu cases in Dutchess County for the week ending Nov. 12, more than triple the number for the seven-day period ending Oct. 29, according to the state Department of Health. Cases in Putnam County rose to 50 from 17 for the same weeks, and even higher, to 98, for the week ending Nov. 19, according to the county Health Department.

Local health departments are only required to report flu deaths of children and teens younger than 18 and none have been reported this season. People hospitalized with the illness rose to 621 as of Nov. 12, compared to 71 on Oct. 15.

The Putnam County Health Department said Nov. 18 that vaccines remain the best prevention for COVID and the flu. There is no authorized vaccine for RSV, but health officials recommend prevention strategies, such as hand-washing, cleaning surfaces, staying home if sick and wearing masks.

“The good news is that there are a number of things we can do to protect ourselves and our families,” said Kathleen Percacciolo, a Putnam public health nurse.