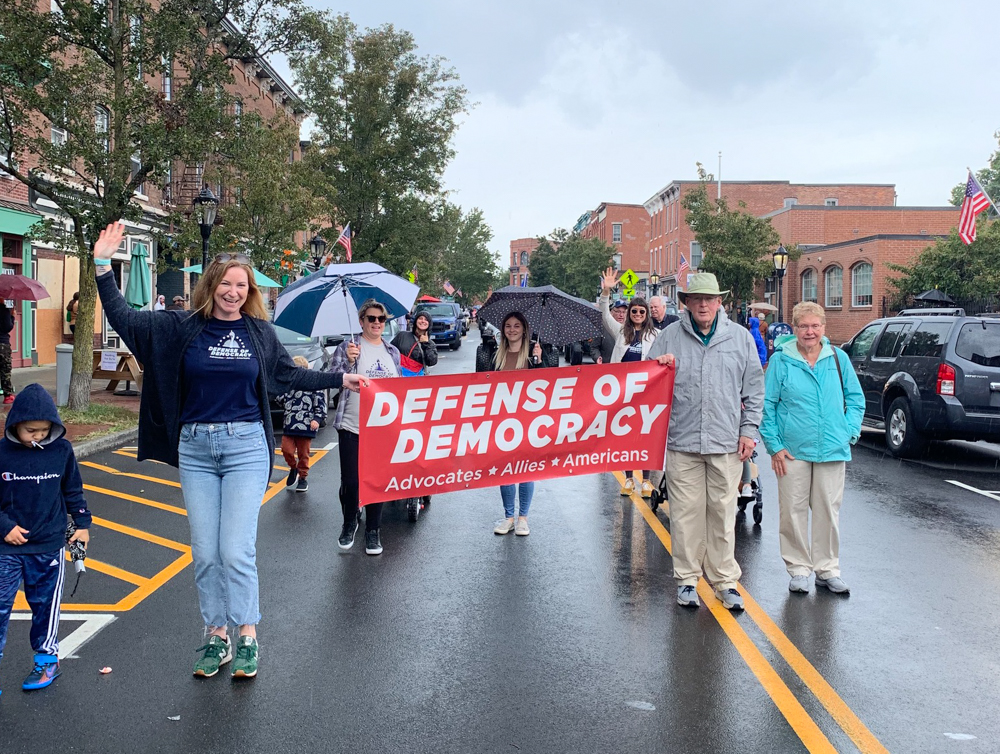 Members of Defense of Democracy, which formed in response to the conservative group Moms for Liberty, march in this year's Spirit of Beacon Day parade. (Photo provided)

Karen Finnegan stood first to address the Arlington school board on Nov. 8.

One agenda item concerned a donation of pocket-size U.S. Constitutions. It was the name of the donor — Moms for Liberty — that drew Finnegan and a group of supporters to the meeting on a Tuesday evening.

Founded in Brevard County, Florida, in 2020, Moms for Liberty has grown to include chapters across the country whose members have turned typically prosaic school board meetings in Dutchess and Putnam counties and other areas into battlegrounds over what they characterize as “parents’ rights.”

The group’s members, many of them outspoken against masking mandates and COVID-19 vaccines, have demanded districts remove books from their libraries, nearly all of which have Black and LGBTQ authors and characters. They also have falsely claimed that “critical race theory,” a framework for viewing racism in the U.S., is being taught in public schools, often conflating CRT with lessons about diversity and inclusion.

So Finnegan, a Fishkill resident who has a son and two stepchildren who identify as queer, and Laura Leigh Abby, who lives in East Fishkill and owns a Beacon fitness studio with her wife, grew alarmed in March when candidates endorsed by Moms for Liberty, one of whom included “Christ is King” on his campaign signs, ran for positions on the Wappingers Central School District board.

That same month, following a campaign by the Dutchess chapter of Moms for Liberty, the Wappingers board voted to remove Gender Queer: A Memoir, a 2019 graphic novel that includes sexual images, from the library at John Jay High School. (Faced with the same protests, the boards in two other districts — Carmel and Arlington — voted to keep the book available.)

“I was shocked to see Moms for Liberty up here,” said Finnegan. “We decided to mobilize the community.”

What began with Abby and Finnegan’s campaign to rally voters in the Wappingers district (which includes parts of Fishkill and East Fishkill) — including signs proclaiming “Teachers Shouldn’t Be Preachers” — is now, eight months later, an organization called Defense of Democracy.

Wearing matching T-shirts imprinted with the organization’s name, members have become the anti-Moms for Liberty, showing up at board meetings to advocate cultural, gender, racial and religious inclusion.

Defense of Democracy has grown to include 150 volunteers in the Hudson Valley — both Democrats and Republicans, Finnegan said. In addition, it has inspired the creation of chapters in eight other states. “It’s been nonstop, but we have put together a really effective plan for fighting Christian nationalists,” she said.

Moms for Liberty, which says it is “fighting for the survival of America,” has chapters in Dutchess and Putnam counties with private Facebook groups that have 75 and 514 members.

Sarah Hanganu, the chair of the Dutchess County chapter, said that the organization welcomes everyone, “regardless of race, religion, sex, orientation, age, disability, political affiliation, thought or any other characteristic.”

“We are united in our love for our children, our communities and our desire for a better future,” she said by email on Wednesday (Nov. 30). “We believe the best way to achieve this objective is to encourage parents and community members to educate themselves on issues that are important to them and engage all levels of government to advocate for their ideas.”

Part of the group’s strategy, both nationwide and locally, is to get candidates who endorse its beliefs elected to school boards. But candidates supported locally by Moms for Liberty did not fare well in May, when Defense of Democracy began mobilizing.

The three candidates that Hanganu’s chapter supported for the Wappingers board, including an incumbent, lost to candidates endorsed by the teachers’ union and Defense of Democracy. Candidates in Putnam Valley and Yorktown endorsed by Moms for Liberty also lost.

“We won the battle, not the war, but it felt really good to know that we can make a difference with just a few of us,” Abby said.

Propelled by the election results, Abby and Finnegan incorporated Defense of Democracy in October. Last month, members convinced the Arlington school board to reject the Constitutions offered by Moms for Liberty, saying it had circulated a petition and collected 300 signatures objecting to the donation.

After the board voted not to accept the gift, the Dutchess chapter of Moms for Liberty protested that “it says a lot when a group that claims to be in defense of democracy is so opposed to young people getting a copy of the foundational document that is the blueprint for how our democracy functions.”

“We realize that some may not agree with our approach,” said Hanganu. “They may prefer that everyone share the same ideas and beliefs, including by compulsion if necessary, or they may prefer to silence voices they disagree with rather than engage and persuade.”

Abby has a different view.

She believes that Moms for Liberty is “co-opting patriotism and love of America as if the rest of us aren’t patriotic and don’t love this country,” she said. “It is important for us to know that we’re allowed to use that language and that we’re here to defend this country that we love against that behavior — against that racist, anti-queer bigotry.”

Moms for Liberty’s chapter in Orange County celebrated last month when the Florida, New York, school district accepted the abrupt resignation of Larry Leaven, its openly gay superintendent, whom Moms for Liberty had accused of bias against white Christians, among other alleged transgressions.

Following Leaven’s resignation, Moms for Liberty of Orange County posted on Facebook: “Take your pornographic indoctrination back where you came from. This is what happens when you mess with our children.”

Florida had its own Gender Queer battle; the district moved the book to an area where students must request it from a librarian. Defense of Democracy accused the board of allowing Leaven to be “relentlessly harassed” by Moms of Liberty.

Hired in 2021, Leaven had most recently been founding director of the Dalton School in Hong Kong, and served two years as the principal of the Beijing International Bilingual Academy in China. He told the Warwick Advertiser that his departure was amicable but that “the community changed” during his short tenure.

“My goal, the teachers’ goal, and the principals’ goal, is to continue to support and serve the students,” he said. “But when there’s constant noise in the community … well, it’s a distraction. The last thing I want to be is an ongoing distraction.”

3 thoughts on “Local Moms Push Back”