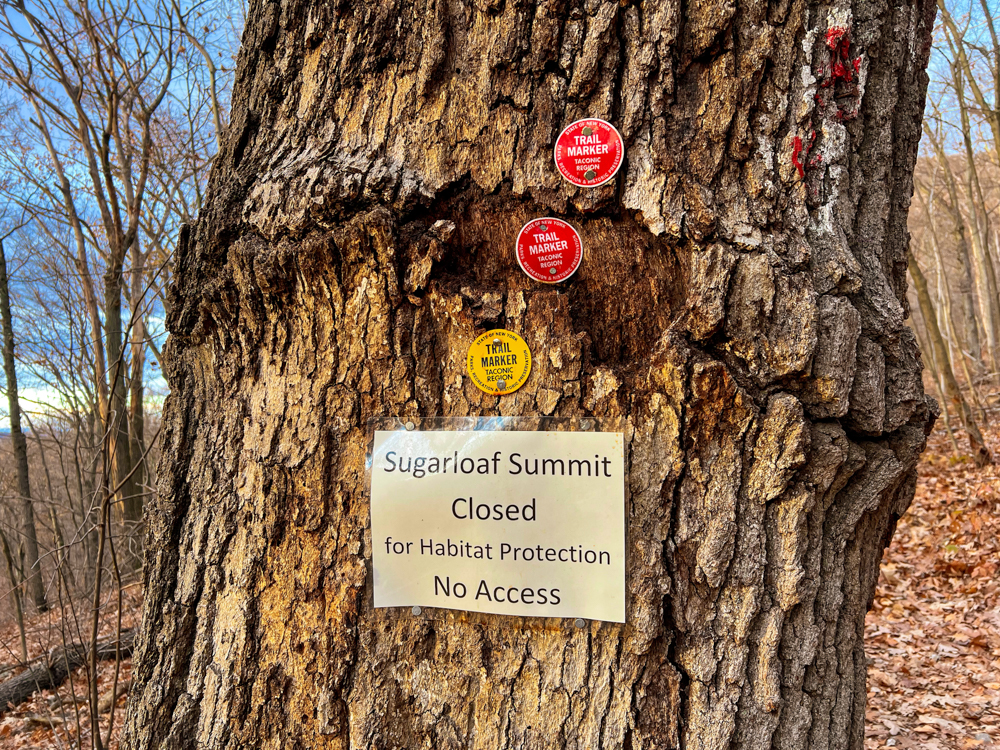 The summit at Sugarloaf has been closed since 2019 because of damage from a wildfire. (Photo by B. Cronin)

Late fall is the best time of year to hike Sugarloaf Mountain — the one just north of Breakneck — especially as the afternoon gives way to evening. With the trees bare, views open. As the sun dips across the river alongside Storm King, all that was brown and dull becomes illuminated in a canyon of burnished gold.

However, my favorite view on the hike isn’t from Sugarloaf. It’s staring up at the summit of Sugarloaf while the sun sinks behind Newburgh and the peak fades to purple. (The summit itself has been closed since a wildfire burned 50 acres in 2019.) Once the summit is shrouded in darkness, I switch on my headlamp and walk down.

Over the summer, when I was working on the Trails (Too) Well Traveled series, I asked each person I interviewed: How can we balance the need to increase access to the outdoors, especially for those who have been historically denied access, while protecting the places we love?

Chris Morris of the state parks department said that one strategy is to ask, each time access is increased in a location, if there are nearby sensitive areas where access can be decreased. 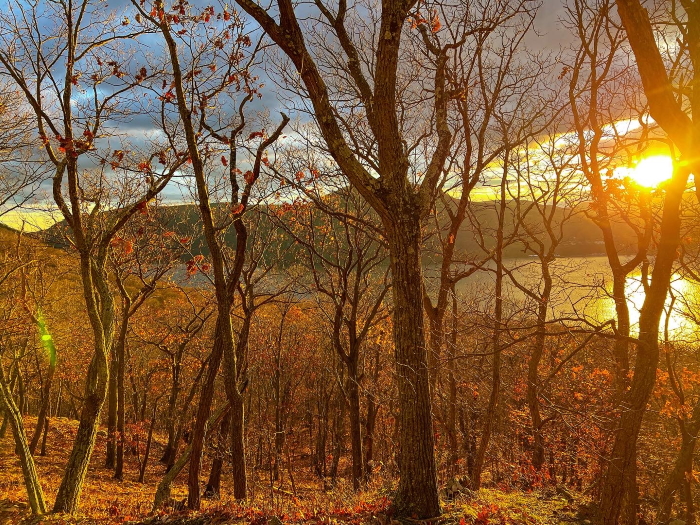 A view from Sugarloaf (Photo by B. Cronin)

The Sugarloaf fire became an example of that approach. It had two positive impacts. First, the pitch pines on the summit need fire in order to reproduce. (The fire enriches the soil and clears away underbrush that would block sunlight from seedlings.) Second, once the trail was closed for restoration work, it gave the parks department a chance to reassess access. Foot traffic had taken a toll on the summit, in the form of erosion and invasive species.

With the newly forged Ninham trail at Breakneck, which allowed people to see a similar view as from Sugarloaf, why not close the summit indefinitely? If that happens, Morris said, the presence of humans will “phase out of memory.”

This month, the New York-New Jersey Trail Conference will release digital updates of its East Hudson map set, the first since the fire, and the first to show that the summit is off-limits. (Paper versions are expected in the spring.) The kiosks at the trailhead have already been updated.

The crew that rerouted the trail away from the summit did a remarkable job; Unless you know exactly where to look, you’ll never notice the remnants of the former trail as you circle the summit and head into the interior of Breakneck Valley.

Why is Everything Called Sugarloaf?

The early colonists were many things, but creative namers isn’t one of them. The Highlands has two mountains within a few miles named Sugarloaf (to differentiate, the one in Putnam is often referred to as Sugarloaf Hill.) Cross the river to Orange County and there’s another Sugarloaf Mountain, and another in the Catskills, and on and on across the country. There are at least 33 in the U.S. with that moniker, and that’s before you get into the four Sugarloaves in the U.K., seven in Australia and Cerro Pan de Azúcar in Uruguay.

What is a sugarloaf? In the days before granulated sugar and sugar cubes, the last step of the refining process involved pouring the sugar into an inverted, cone-shaped mold with a hole in the bottom. Over a few days, any molasses or impurities would drip from the hole, leaving a rock hard cone of pure sugar. Shoppers would use a sharp clamp, known as a sugar nip, to cut off as much of the cone as they wanted to buy.

It’s not clear why this would not be a sugar cone, rather than a loaf, although at least this meant that the former phrase was available when ice cream became popular.

The exception would be if you’re following a phone app such as All Trails, which maps via GPS where people walk. This is one of the many reasons the app is the scourge of outdoor management professionals: All it takes is one hiker getting lost, or intentionally going off trail into an ecologically sensitive area, and soon dozens of other hikers are following the GPS breadcrumbs and compounding the problem.

The app and others like it are one of the reasons the Ninham trail had to be created: One or two hikers attempted to bail out at Breakneck and blundered in retreat through the woods and rocky cliffs, only to be followed by hordes of digital lemmings who didn’t know they were tracing the footsteps of a mistake.

This is also the time of year that Dennings Point in Beacon is closed — from Dec. 15 until about mid-March — to give the bald eagles the solitude they need to nest. And yet several times every winter, when I run past, I spot footprints in the snow on the other side of the barrier.

Look, I get it. Dennings Point and the Sugarloaf summit are special places that for many people hold decades of memories. But are they backdrops for our personal adventures and dramas, or landscapes that have provided something larger? What happens when these landscapes need something from us in return?

That is why I don’t feel sadness while watching the night fall over Sugarloaf, or when I see places I used to walk become covered in stillness and disappear. What I feel instead is the sense that an extraordinary favor is being repaid.

One thought on “Out There: Season of Sanctuary”