The Metropolitan Transportation Authority plans to soon resume its schedule of regular fare hikes on Metro-North commuter trains, which had been suspended during the pandemic shutdown.

The fares on other systems run by the MTA — New York City buses and subways, the Long Island Rail Road and seven bridges and tunnels — are also expected to increase. The agency says it hopes to cut into an operating deficit that is projected to reach $3 billion by 2026.

Janno Lieber, the MTA’s chair and CEO, and his staff on Nov. 30 presented the MTA board with a budget for 2023 as well as a four-year financial plan. The latter calls for raising fares and tolls by 5.5 percent in 2023 and 4 percent in 2025.

The agency last raised fares in April 2019. More recently, to entice riders back after ridership plummeted during the pandemic, the MTA has offered discounts. 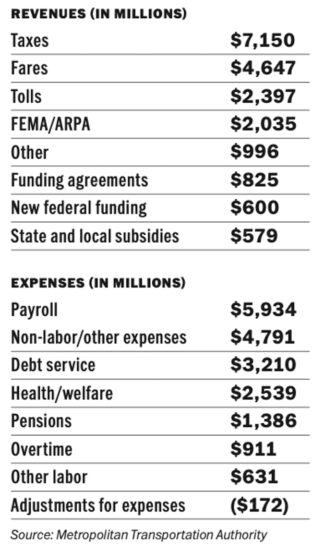 Ridership is up substantially on Metro-North since it cratered beginning in March 2020, when all but essential workers largely worked from home, but still below pre-pandemic levels. Metro-North had nearly 192,900 riders on Oct. 11, a Tuesday, but that total was only 74 percent of what the system averaged on weekdays in October before the pandemic. On Monday (Dec. 5), 164,900 people rode Metro-North, about 62 percent of the average for a weekday in December.

The MTA forecasts that ridership will improve to 69 percent of pre-pandemic levels in 2023 and 79 percent by 2026. But annual revenues from fares are projected to average $2.1 billion less than what was forecast for those years before the pandemic.

Lieber said that the agency, whose budget next year includes $19.2 billion in spending, is facing an “existential crisis.”

“This is a plan that’s designed to protect riders,” he said. “Our priority is maintaining service and making cuts that do not require job cuts, don’t impact on our ability to put on service, and which are moderate in the fare increases.”

Raising fares was one of several deficit-reducing measures presented to the board.

The agency’s four-year projection apportions $5.65 billion remaining from $15 billion in emergency federal funding the authority received in the America Rescue Plan, COVID-relief legislation enacted in March 2021. If not apportioned, the unspent funds would erase the projected deficits for 2023 and 2024, but leave gaps of $3 billion for the following two years.

The financial plan also envisions shaving $1.2 billion from expenses over the four years through cost-saving initiatives, and saving $558 billion in debt service by using federal aid to repay a bond anticipation note.

However, that still leaves $1.2 billion deficits for 2024 and 2025, growing to $1.6 billion for 2026, and the 2023 budget is built on the expectation that the federal government will provide an additional $600 million. That aid is uncertain.

The budget will be submitted to the MTA board for a vote this month. Any fare increase will require public hearings.

Neal Zuckerman, a Garrison resident who represents Putnam County on the board and chairs its finance committee, said he supported spreading the federal aid over four years.

But he also warned about uncertainties next year, when “our financial performance will change, ridership behavior may not materialize, we don’t know what the [state] Legislature’s going to do and there are many other factors we can’t predict.

“The reality is, we have a structural imbalance,” he said.

The MTA is also working on a “congestion-pricing” plan that would raise $15 billion for capital projects through a toll on vehicles entering a section of Manhattan from 60th Street to the south, excluding FDR Drive and the West Side Highway.

The agency estimates that it would charge drivers with an EZPass between $9 and $23 during peak hours, and those billed by mail, $14 to $35.