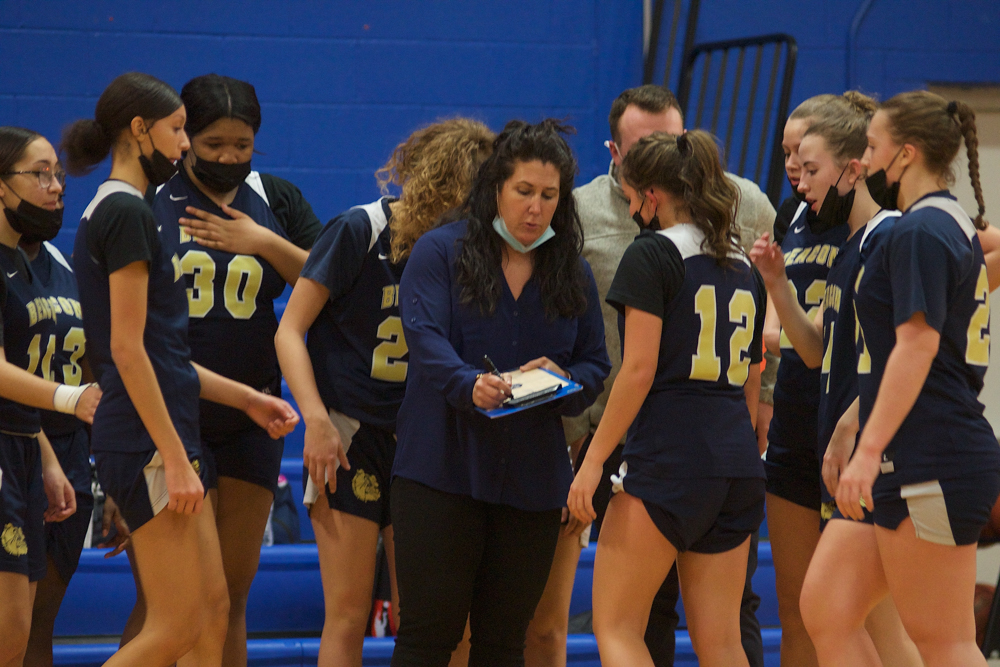 The Bulldogs return with last year’s lineup intact — Beacon didn’t lose any players to graduation. But the team remains young, without a senior on the roster.

“Reilly is a great ball handler, and one of our better shooters,” said Coach Christina Dahl. “Daveya is tall, and causes problems with her arm span. She’s great on defense and rebounding, and her confidence is growing. Rory and Lila have also been working hard on their defense. The other girls — Shy’Anne Kush, Kiarra Rodriguez, Rayana Taylor and Alex McCollum — have all been working hard.” 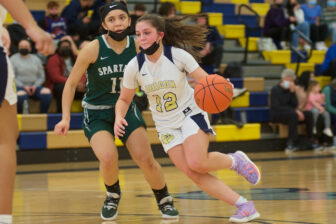 Reilly Landisi is a captain for the Bulldogs, along with Daveya Rodriguez and Devyn Kelly. (File photo by S. Pearlman)

Dahl said she will be looking for the team to make steady improvement.

“We always have high expectations, and we feel lucky to be returning our whole team,” she said. “And we’re adding a freshman [Erin Cleary] into the mix. The girls have been together since seventh grade and have gained a lot of experience in the last year.”

The team had a rough start, losing its first three games, which were all on the road. The Bulldogs opened with a 53-44 loss at Saugerties on Dec. 1, with Landisi’s 11 points leading the team. Kelly added 10 and Fryar had nine.

After being down 15 points at halftime, “we made some good adjustments to come within two points,” Dahl said. “We showed a lot of intensity, but fell short in the last couple of minutes.”

“That was a tough game against a quality opponent,” Dahl said. “We lacked intensity on both ends of the court, and Wallkill took advantage. We’re looking for the girls to start playing with more cohesion.”

Beacon opened its home schedule on Thursday (Dec. 8) with a 42-33 win over Chester and will travel to O’Neill on Tuesday (Dec. 13).

Coming off an 8-13 season that ended in the Section I, Class C playoff semifinals with a loss to Yonkers Montessori Academy, the Blue Devils enter the season with experienced players and a new coach. 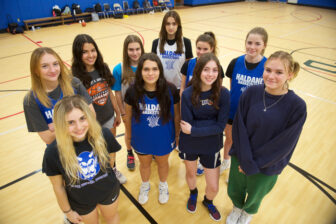 Coach Ed Crowe, who succeeds Jessica Perrone, believes the Blue Devils can continue improving without skipping a beat. “We play a very tough schedule, but these girls are prepared, and they’ll be ready to go. I think we can win the sectional championship.

“Mairead, Betsy and Amanda can all shoot well, they rebound the ball at a good clip and they’re good finishers,” Crowe added. “They play good defense, which is what our team will be modeled around — 32 minutes of good defense, being able to switch defenses, switch presses. Our offense will come from our defense, so we’ll look to push in transition, and get up and down the court.”

Crowe coached junior varsity basketball at O’Neill High School, but this will be his first stint as a varsity basketball head coach. He’s coached the boys’ lacrosse team at Haldane for eight years and returned as coach of the girls’ soccer team this past fall. 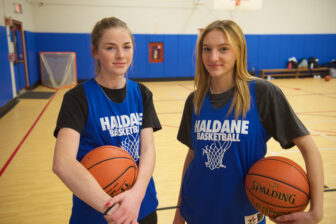 Mairead O’Hara and Amanda Johanson are the Blue Devil captains, along with Betsy Cates. (Photo by S. Pearlman)

“I’m absolutely thrilled to be here,” Crowe said. “I love this group of kids. They’re hardworking, and I enjoy coming to practice every single day. They’re just a fun group to work with.”

Haldane opened its season Nov. 30 with a 53-27 loss at home to Brewster. O’Hara and Cates each scored six points and Ruggiero added five.

“Brewster is a Class A school, and much bigger,” Crowe said. “We had a hard time converting on the offensive end and breaking their press.”