Construction has begun on the first 17 miles of a 339-mile transmission line that will be buried under the Hudson River as it passes the Highlands and carries hydroelectric power from Canada to New York City. 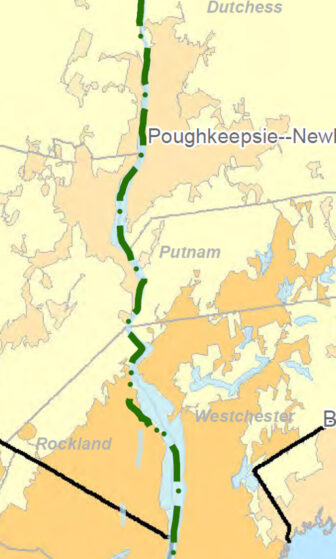 The power line will pass the Highlands underneath the Hudson River.

Gov. Kathy Hochul on Nov. 30 announced the launch of the Champlain Hudson Power Express, a $6 billion project in which Hydro-Quebec will deliver 1,250 megawatts of electricity, enough to power more than 1 million homes.

The state Public Service Commission in October approved construction of the first two segments, a conduit between the towns of Putnam and Whitehall in Washington County.

The U.S. portion of the line begins under Lake Champlain in Clinton County and is brought above ground in Washington County before being submerged again in the Hudson between Columbia and northern Westchester counties. It will pass through 15 counties, 60 towns and 60 school districts, including Beacon’s.

New York State considers the transmission line, which is supposed to be finished in 2026, a key component to fulfill the goals of the Climate Leadership and Community Protection Act. Passed in 2019, the legislation calls for reducing greenhouse-gas emissions that contribute to climate change by 40 percent and supplying 70 percent of electricity through renewable sources by 2030.

Other sections of the line will be buried on land, but 60 percent of the project will be underwater. Along with Lake Champlain and the Hudson River, sections will run under the Harlem River before the line terminates at a converter station in Astoria, Queens, that will connect to Con Edison’s grid.

According to Transmission Developers, the firm that is building the line, the cable under the Hudson will bypass a section where the riverbed is contaminated by pollutants released over decades by General Electric that underwent a cleanup overseen by the Environmental Protection Agency. It also will bypass a section of Haverstraw Bay that is a breeding and spawning habitat.

The company says the machine that carves a trench in the riverbed operates without dispersing large amounts of sediment. Seven municipalities, including the City of Poughkeepsie, that draw their drinking water from the river fear that the process will disperse contaminated sediment toward their intakes.

Transmission Developers agreed to spend $117 million over 35 years on restoration and other environmental projects at Lake Champlain and along the Hudson, Harlem and East rivers. However, the firm, facing local opposition, withdrew a request to Dutchess County for $105.5 million in property tax breaks over 30 years, plus exemptions for $13.6 million in sales taxes and $1.3 million in mortgage taxes.

An earlier version of this story reported that the transmission line was expected to cost $4.5 billion. In fact, the projected cost is $6 billion.

One thought on “Work Begins On New Power Line”