As Thanksgiving approached, health officials warned about the infection risks posed by traveling to gatherings with families and friends.

Three weeks later, medical personnel at area hospitals say they are seeing the impact of those gatherings — a rise in the number of patients sick with COVID-19, most of them elderly, that is again shrinking inpatient capacity as people infected with the flu also compete for beds.

On the day before Thanksgiving, the state Department of Health reported 2,823 people hospitalized with COVID, including 273 patients in intensive care. By Tuesday (Nov. 13), hospitals were treating 3,571 COVID patients, an increase of 26 percent, with 342 in the ICU.

In Newburgh, Montefiore St. Luke’s Cornwall Hospital is averaging seven more COVID inpatients a day this month compared to November and Hudson Valley Hospital, five, according to data that hospitals report to the state.

On an average day this month, Putnam Hospital Center was caring for more than twice as many COVID patients than in November, and has come close to reaching its limit on staffed beds.

“Last week, we had almost 25 percent of our inpatient-occupied beds filled with COVID-19 patients,” said Marcela Rojas, a representative for the hospital. “Most people are coming in with respiratory/flu symptoms and end up having both COVID and flu.” 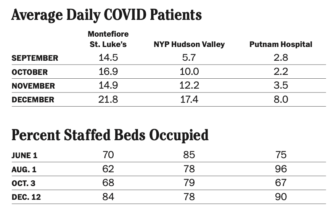 That also has been the case at NewYork-Presbyterian Hudson Valley Hospital near Peekskill, a representative said. Shortly after Thanksgiving, its emergency department began seeing an increase in people with both COVID and the flu.

The state health department, in its most recent weekly flu update, reported that cases for the week ending Dec. 3 rose 64 percent from the previous week, driving hospitalizations up by 58 percent to 2,465. That total included 584 flu cases in Dutchess County and 393 in Putnam.

Nearly 1,100 people in Dutchess County and just over 700 in Putnam have tested positive for the flu through Dec. 3, which marks the first nine weeks of the season. Both counties are on pace to easily exceed the 2021-22 flu season.

County health departments are only required to report flu deaths of children and teens younger than 18. Just one child has died this flu season, according to the state data; the federal Centers for Disease Control and Prevention estimates that there have been 7,300 flu deaths nationwide so far, including 21 people younger than 18.

“Our message is simple but urgent, especially as we approach the holiday season: Get vaccinated,” said Mary Bassett, the state health commissioner.

As during the height of the pandemic, most people who are hospitalized or die from COVID are older. On Monday (Dec. 12), 17 of St. Luke’s 22 COVID patients were 65 or older, mirroring the demographics of patients at Hudson Valley Hospital, Putnam Hospital Center and other facilities.

Deaths from COVID have risen this month in New York and Dutchess County. The state said on Wednesday that 38 people had died from COVID on Tuesday, compared to 26 on Dec. 1.

Six Dutchess County residents have died from COVID in the first 13 days of December, three more than in all of November and one more than October. No one has died in Putnam County since Nov. 22. Three county residents died that month, compared to four in October.

Residents age 60 and older have accounted for 87 percent of the state’s 59,867 COVID fatalities, as of Tuesday.