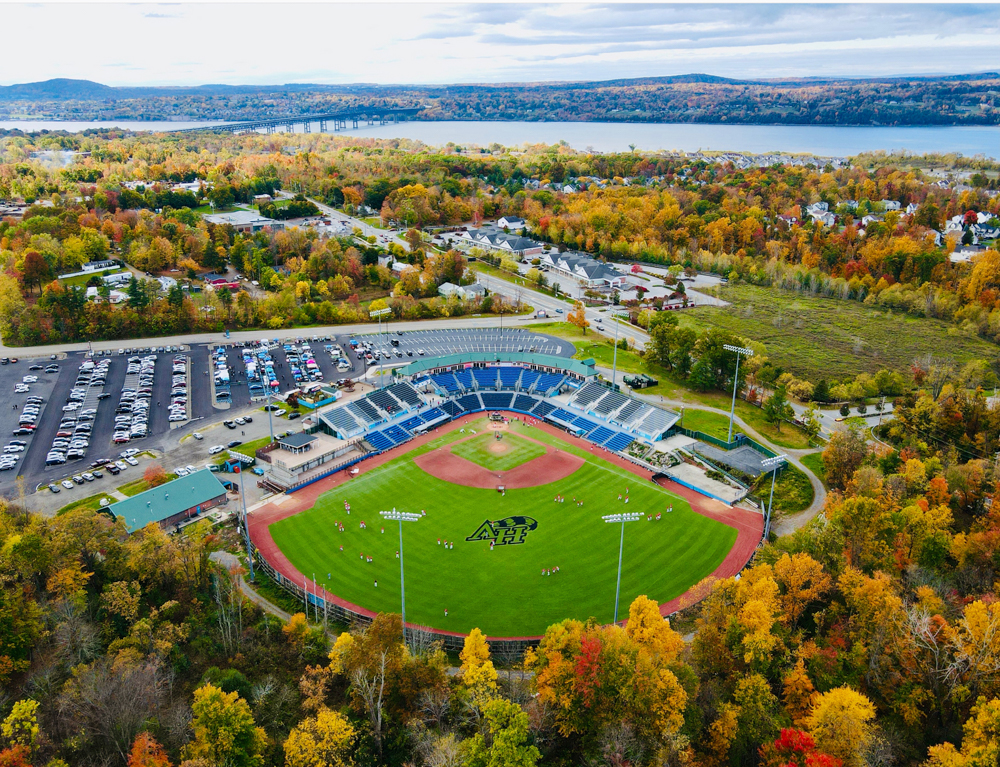 The Renegades play at Dutchess Stadium on Route 9D outside of Beacon. (HVR photo)

The Dutchess County Legislature approved the county’s 2023 budget by an 18-7 vote on Dec. 8; County Executive Marc Molinaro, who will vacate office next month to represent the 19th District in the U.S. House of Representatives, signed the $587.7 million spending plan on Wednesday (Dec. 14).

Notably, the budget includes a 12 percent property tax rate decrease — the eighth straight rate reduction — and, at $99.45 million, the lowest property tax levy in 14 years. It also included a last-minute amendment, a $25 million allocation to fund continued upgrades at Dutchess Stadium, that rankled Democratic legislators, only one of whom voted for the budget.

In a statement on Thursday, the county executive said he was “disheartened” that seven Democratic legislators, including Yvette Valdes Smith and Nick Page, whose districts include parts of Beacon, voted against “such a beneficial spending plan.”

Molinaro’s initial proposal included $15 million for the stadium, which is the home of the Hudson Valley Renegades, the High-A affiliate of the New York Yankees. However, legislators learned early in the week before the Dec. 8 meeting that the item had been pulled from the budget. In its place, Legislator Will Truitt, the Republican majority leader, introduced the $25 million amendment minutes before legislators were to vote on the budget, and after two opportunities for public comment had passed.

Valdes Smith, who is the minority leader in the Legislature, called the stadium spending exorbitant. “It speaks volumes that this is something we can just throw money at without doing our due process,” she said this week. “It doesn’t seem fair to the taxpayers.”

This was hardly the first time the 4,494-seat stadium has been at the center of controversy.

In 2018, the county committed $2.4 million to improving the stadium, a request that legislators approved but said was hurried. In 2021, Dutchess agreed to spend $12.5 million in federal American Rescue Plan (ARP) funds on additional improvements while announcing a new, 25-year lease with the Renegades, who have played at the park since it opened in 1994.

While announcing the lease, Molinaro said he expected the county to net $15 million through increased rent and other opportunities over the life of the agreement.

After backlash, Molinaro, a Republican, said earlier this year that the county would redirect $9.5 million of the ARP funding to address affordable housing and homelessness.

Dutchess Comptroller Robin Lois, a Democrat who has been critical of spending on the stadium, sent an email to the 25 legislators before the Dec. 8 meeting, asking the lawmakers to wait a month before approving the latest expenditure. The $25 million, which is to come from the county’s fund balance, will still be available in January, and the delay would allow for public comment on the proposal, Lois said.

“This last-minute amendment will be perceived poorly as an effort to avoid proper public oversight on an already contentious and controversial project,” she wrote. “This is a perception I would like to avoid for our government.”

But on Wednesday (Dec. 14), Gregg Pulver, a Republican who is the chair of the Legislature, argued that the project has been discussed since June 2021, when the new agreement with the Renegades was announced. “The merits and functions of the project have been in the public domain for over a year,” he said. “The amount, which changed due to inflation and the Renegades contributing $4 million, was the only piece we needed to re-discuss.”

Pulver said that the decision to move the funds into the budget through an amendment, instead of bonding for the initial $15 million in the 2023 plan, would save taxpayers $11 million in interest.

Legislators added around a dozen other amendments to the budget using the fund balance. Other than the stadium, the most expensive was $1 million for nonprofit infrastructure grants.

An amendment proposed by Valdes Smith, for $517,811 to pay for economically disadvantaged high school students to receive college credit for classes taken through Dutchess Community College (DCC) during the 2023-24 academic year, was voted down by the Legislature along party lines.

Pulver said he believes the amendment didn’t make it because DCC has not begun to charge dual enrollment tuition. (The plan to charge $64 per credit hour, or a third of its standard tuition rate for state residents, is scheduled to begin in the fall of 2023.)

“If the college isn’t charging students or asking for the money, why would we appropriate money to cover this not-existent expense?” Pulver asked. “Further, charging high school students was a policy that every legislator voted in favor of when the Legislature adopted the DCC budget in July. Where were those legislators then to protest this change?”

Valdes Smith’s proposal would have covered tuition for students who are eligible for free or reduced-price lunch — according to the college, about a third of the more than 3,000 students who use the dual enrollment program.

Matt Landahl, the superintendent of the Beacon City School District, said during the school board’s meeting on Dec. 12 that he and other area superintendents would reach out again to the Legislature to try to find funding for those students.

“The last thing we want is a student making a decision not to take one of these classes because they feel like they can’t afford it,” he said.

One thought on “Dutchess Budget Approved — With $25M for Stadium”