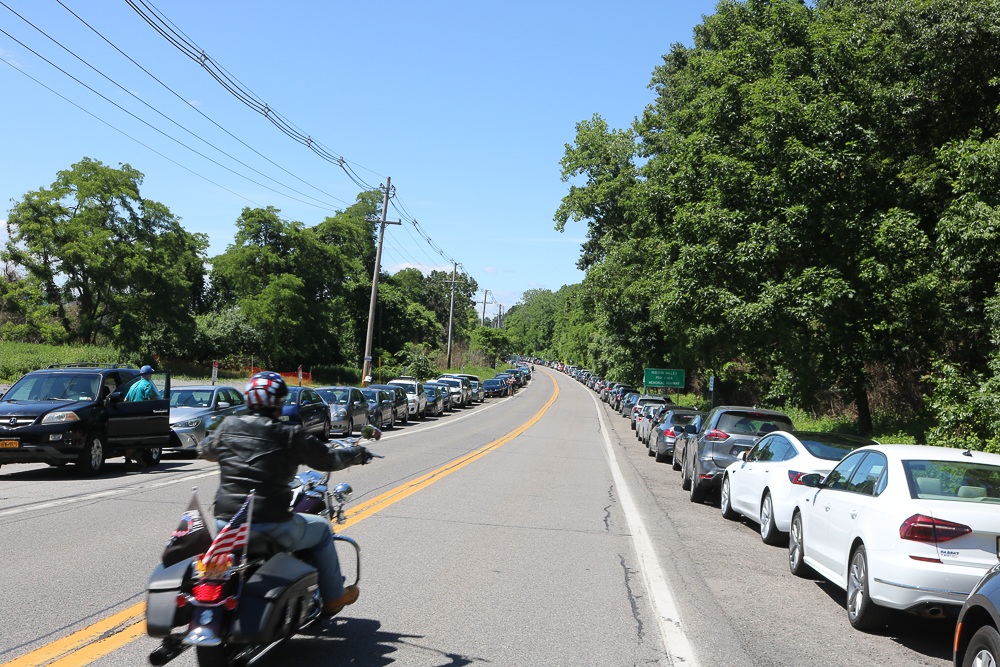 The state in 2020 added signs near Breakneck asking visitors to park parallel to the road. (File photo by M. Turton)

Nearly 500,000 people visit the Hudson Highlands State Park each year, which may feel like a lowball to anyone attempting to drive past or hike Breakneck Ridge on a sunny Saturday afternoon.

Managing and redirecting that sprawl is one of the goals of the Hudson Highlands Fjord Trail project, a 7.5-mile linear park that will connect Cold Spring to Beacon along the Hudson River. Critics have raised concerns that the project could instead contribute to the problem, although trail officials insist it will alleviate the dangerous weekend glut of vehicles and pedestrians along Route 9D near Breakneck and Little Stony Point.

Construction on the Fjord Trail, which is being funded by New York State and private donations, is scheduled to begin soon for completion by 2028. The first phase includes new parking and a pedestrian bridge over the Metro-North tracks. The project operates under the wing of the nonprofit Scenic Hudson, based in Poughkeepsie.

At a webinar on Dec. 6, consultants hired by the Fjord Trail shared the preliminary findings of a study that examined how the project could relieve congestion.

Dan Berkowsky, a senior transit engineer with Creighton Manning Engineering, said the researchers found that, at peak times, parking was 10 percent to 25 percent above capacity along the state highway near Breakneck.

“People park in very interesting ways — not necessarily safe,” he said. “There’s no one actually enforcing the parking rules, keeping people where they’re supposed to park. People just park where they can.”

An obvious solution is to increase the number of legal spaces, said Stephen Falbel, president of Steadman Hill Consulting, although “that’s not to say we want to provide a parking space for everyone who might drive there. But we don’t want people cruising around streets and parking and neighborhoods, creating traffic problems and safety problems.

“We want an adequate supply of parking, but we also want a shuttle system that will improve mobility and to encourage people to use the train,” he said. The study found that 66 percent of park visitors arrived in vehicles and 29 percent by train.

The researchers suggested adding 387 spaces, for a capacity of 620. The number could change because it includes 100 spots at Boscobel in Garrison that have not been finalized, but most would be located in new lots at Breakneck, the Notch Trail and Dutchess Manor, which will become the headquarters for the Fjord Trail. 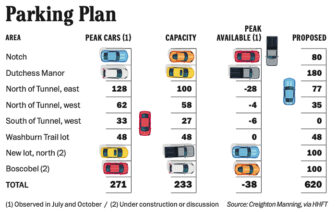 Some parking would be allowed along Route 9D north of the Breakneck Tunnel, but 46 spots would be removed, to lower capacity to 112, and parking south of the tunnel would be eliminated. The Fjord Trail would like to have the state Department of Transportation lower the speed limit near Breakneck from 55 mph to 40 mph, and the researchers said roadside parking will help justify that change.

The new parking lots would require a fee, although how much it would be and how it would be collected (via an app, kiosk, EZ-Pass or a staffed booth) has not been determined. It’s possible that residents would receive discounts. The challenge, the planners said, is to set a fee that’s just high enough to get people to take the shuttle.

Electric shuttle vans would be either free or next to nothing, although planners are leaning toward the former. “If we want to maximize the number of people taking transit, charging a fare is not the way to do that,” said Falbel. The vans would be able to carry bikes, and some would accommodate wheelchairs.

The proposed shuttle route would include the Beacon train station, the Notch trailhead just south of Beacon, Dutchess Manor, Breakneck, Little Stony Point and possibly Mount Beacon. The southernmost stop could be the Cold Spring train station or Boscobel. Having a stop in the village would eliminate foot traffic there but would increase parking at the station and traffic if the shuttles stopped on Main Street.

Adding Boscobel would keep vehicles out of the village and make it easier to access the historic estate without a car. However, it would make the route longer, which could make it more difficult to keep the shuttles on schedule.

The Fjord Trail plans to hold a workshop in Cold Spring in January and issue a final parking and shuttle report in February.