Artist ‘learned not to be wishy-washy’

Twenty years ago, Susan Lisbin was completing a residency at the Vermont Studio Center. During her time there, other artists came by the studio to see her work. 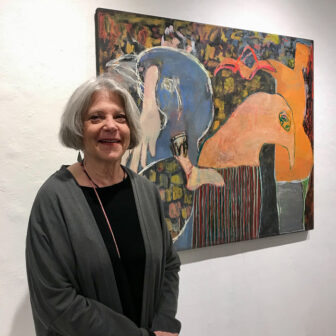 She found the conversations frustrating because the visitors “weren’t getting the message I expected them to get. I realized I had to be more direct,” she says. “It’s not that everything I made had to have strong contrasts and colors, but I did have to make sure there’s enough there for people to think about, and that it’s not just about my personal process.”

Lisbin, who has a studio in Catskill, says she still keeps that in mind while painting and sculpting. Her solo show, Inner Vision, will be on view at the Garrison Art Center through Jan. 15, with an artist’s talk scheduled for Jan. 7.

During her time in Vermont, Lisbon says she realized that strength was key, so she worked on that aspect of her painting. “I was doing abstract expressionist paintings, and people thought they were sexual images, which wasn’t what I was intending!” she says. “I learned not to be wishy-washy, because what I had to say was a statement. I began pushing myself as far as I could. I still do.”

As a child, her mother encouraged her drawing by taking her to museums. Still, she had doubts about being a professional artist.

“When I was a young adult, it was difficult for me to take myself seriously as an artist,” she recalls. “But I wasn’t happy doing other things. My sister told me, ‘You should be an artist,’ and finally I listened to her and transferred to art school and loved it — she was right.”

After earning her bachelor’s from Ramapo College, Lisbin painted for a few years before attending Montclair State for a graduate degree in painting.

In the ensuing decades, Lisbin continued to make art while earning a living in disparate day jobs, including as a bank teller and a welder — “not the exciting kind, more on the industrial side,” she says. In the early 1990s, she was hired as director and curator at the Cottage Place Gallery, in Ridgewood, New Jersey. Then came teaching, which she did for 14 years, through 2014, mostly in the Millburn, New Jersey, school district.

“The job that affected me the most was when I decided to teach,” she says. “I began with grades K through 6, and found them super-open to the abstract forms. I showed them all kinds of fun. Later, I taught older students. It was a lovely job.”

During the pandemic, Lisbin began working with new materials, including Canva-Paper and gesso. She experimented with content, as well. “I tend to go with something for a while, then return, but in a different way,” she says.

In a recent painting, “No Strings Attached,” which is included in Inner Vision, she included images people could recognize, “in this case, feet. The feet become the sense of the unknown in the painting: ‘Where are we going to go? Where will my feet take me?’

“At the opening, a gentleman stood in front of a painting for a while. I asked him ‘What do you see?’ I’m so into the colors and the composition and how works are reacting to each other. Hearing what someone else thinks is one of the joys of showing.”

She’s happy at how the show came together. “Even though they managed to get more in than I thought, nothing felt pushed,” she says. “They unified the show and set up a nice communication between the paintings and the sculpture.”

Inner Vision is on view with smallWORKS, a biennial, juried exhibition featuring art focused on a theme. This year, it’s “This World We Share.”

Several hundred entries were submitted from around the world and 69 were chosen by juror Carl Van Brunt. The works include oil and acrylic paintings, photos, 3D works from found objects, collages, woodblock prints, wood sculptures, kinetic sculpture and handmade books.

The Garrison Art Center, at 23 Garrison’s Landing, is open from 10 a.m. to 5 p.m. daily except Monday. See garrisonartcenter.org.