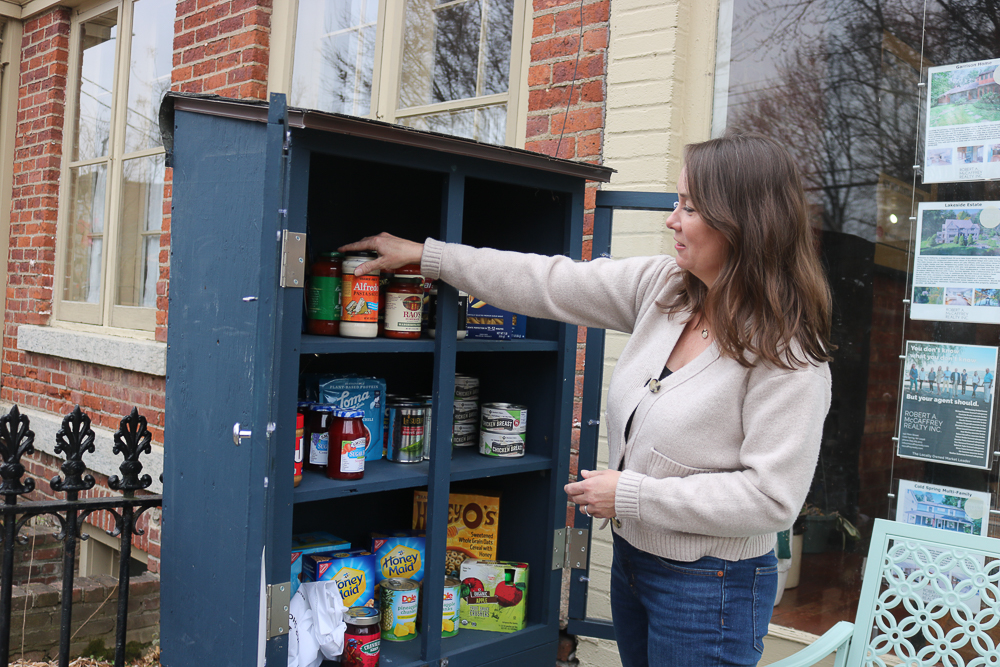 The staff at Robert A. McCaffrey Realty in Cold Spring hopes the Tiny Food Pantry installed this week in front of their Main Street office will help reduce hunger locally — and that residents will generously support it.

Fareground, a food pantry in Beacon, provided the cabinet as part of a network of a dozen Tiny Food Pantries in Beacon, Wappingers Falls and Newburgh. A sign on the door reads: “Take what you need, give what you can.”

Charlotte “Charlie” Brooks, an associate broker at McCaffrey, said The Current’s series, Hunger in the Highlands, published a year ago, made her more aware that even bucolic Philipstown could have food security issues. She came across the Tiny Food Pantry program at a Fareground event.

Brooks said many items can be donated, especially nonperishable foods such as canned vegetables, tuna or chicken, and dry goods, including pasta, coffee, tea, sugar and flour.

She said the latest Tiny Food Pantry is designed to augment the Philipstown Food Pantry, which is open from 9 to 10 a.m. on Saturdays at the First Presbyterian Church at 10 Academy St.

“If people can’t get there, or just need something late at night during the week, they can stop by our little pantry,” Brooks said. “The idea is to donate food you can spare or take items you need. A lot of people can’t make a big gesture, but many can buy a couple of extra cans of vegetables or soup” to contribute.

The pantry also accepts personal hygiene products such as soap and toothpaste, as well as packaged pet food.

“It’s a small thing, but we’re a small town,” said Bill Hussung, who owns the real estate agency. “People think there’s no poverty locally.” He said he was shocked by statistics cited in The Current series. “There is food insecurity here, people living paycheck to paycheck, trying to balance things, including a food budget.”

The nonprofit calculated that, in 2020, a family of four with two children in school needs to earn $89,784 annually in Putnam County and $71,760 in Dutchess to survive on a bare minimum budget — and that was before the recent surge in inflation.

If the pantry is full, donations can be dropped at the real estate office. “Once we have a better understanding of demand, we’ll tweak it as needed,” Hussung said.