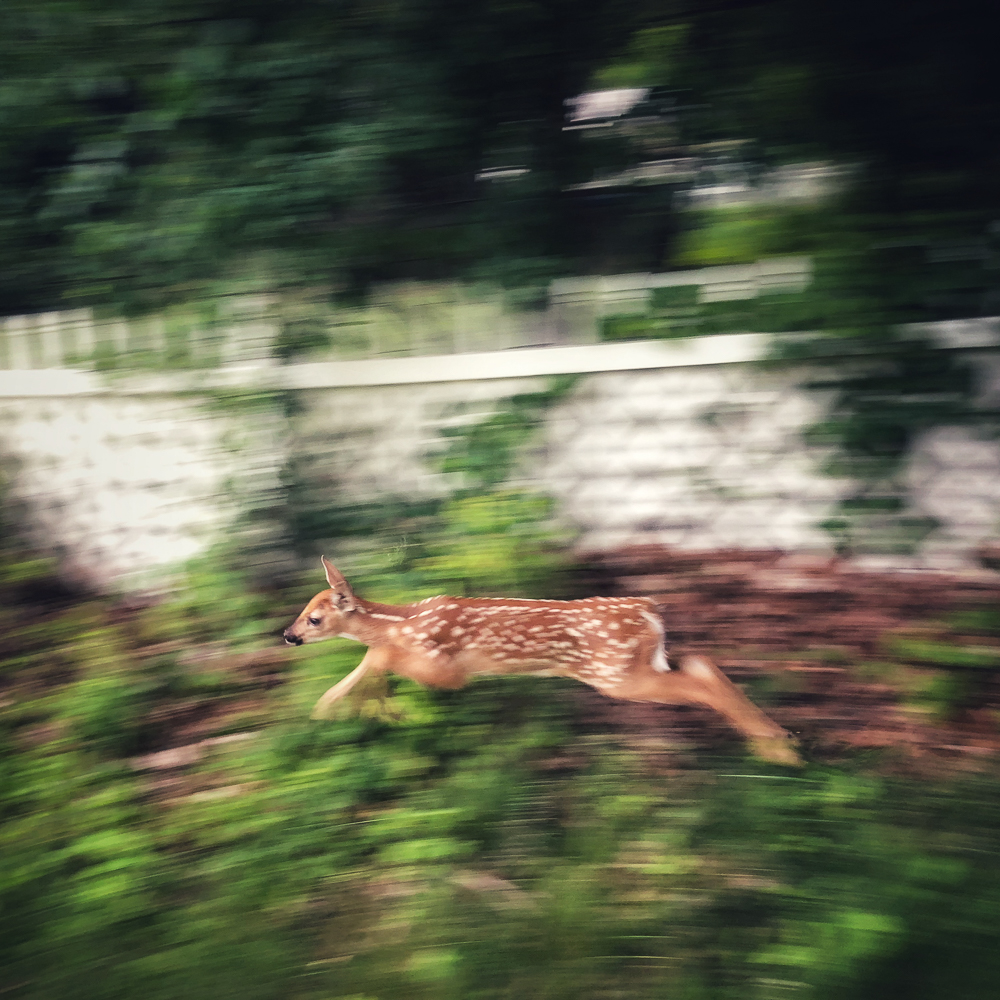 Deer, like people, enjoy a good run now and then. (Photo by B. Cronin)

It’s hard to believe that there was ever a time in the Northeast when deer were not common. But deforestation and the hunting of deer and the predators that eat them nearly wiped out the population in New York by the late 19th century. The only place that had healthy numbers were the remote Adirondacks — some states short on deer even imported animals from the Adirondacks to replenish their stocks.

However, those states did not import the few remaining wolves and mountain lions at the same time. Those predators soon vanished from the Northeast, while the surviving deer pushed into tapped-out land left behind by farmers who moved west. By the mid-1950s, New York State conservationists were noting that, in spite of being heavily hunted, deer were so abundant that they were interfering with agriculture and forestry.

That has continued. Add hunting and car accidents to the toll of Lyme disease and the docile deer is the deadliest animal in the U.S. by a wide margin. (Bees, wasps and other stinging insects are second, followed by dogs, then horses and cows. Bears, mountain lions, sharks, wolves and snakes are much further down the list.)  New York’s deer population is estimated to be 1.2 million, and I’m sure there have been times when you thought they were all in your garden.

Not this year. For the past three summers, the Mid-Hudson Valley has had outbreaks of Epizootic Hemorrhagic Disease (EHD), a virus that is fatal to white-tailed deer. The virus is spread by midges, biting insects commonly referred to as “no-see-ums.” The virus, which does not affect humans, is usually only found in the South, where deer have built up a resistance.

Scientists believe the midges may have hitched rides north on the winds of hurricanes and tropical storms. Nearly all of the Hudson Valley outbreaks have occurred a few weeks after a storm hit the Highlands, although an outbreak early in the summer of 2022 appears to be an exception. Testing showed that the virus had not changed from 2021, suggesting it can survive our increasingly mild winters, says Brendan Quirion of the state Department of Environmental Conservation.

But the 2022 outbreak was smaller and more isolated, he noted, suggesting our deer may be building resistance.

In deer, EHD acts like a superhot fever, which is why dead deer are often found near sources of water or observed with their tongues out as they try to cool down. They also suffer from cracked and deformed hooves, Quirion says, which may be caused by swelling.

Conducting a deer census isn’t practical (it’s hard to get them all to stand still), so the DEC uses hunter harvests and extrapolates. Those numbers are much lower than usual in the Mid-Hudson Valley, although farther north, where Quirion hunts, the numbers were stable. That’s probably not news to any local hunters, and it helps explain the lush understory in Fahnestock State Park late in the fall when I went foraging for mushrooms for an earlier column.

Deer are selective browsers: They munch the most nutritious vegetation first (trilliums, orchids, whatever’s in your garden), which tend to also be species of plants that can’t tolerate a lot of browsing. They then browse woody vegetation, which can be harmful when a forest is regenerating.

New York would like to reduce the deer population in some parts of the state to allow forests to regenerate. But it prefers to do that in the long term through hunting, not a virus. (Densely populated areas such as Staten Island, where hunting isn’t practical, have been experimenting with sterilization.)

There are, of course, still deer here. I saw two this morning, staring silently from the woods as I ran past. But for a few years, pre-EHD, I used to see herds at Long Dock, Madam Brett Park and on Tioronda Avenue. Sometimes they’d stare. Sometimes they’d approach close enough that I could have stroked their chins, stare and walk away. It was a bit unnerving. I started keeping a folder on my phone called “Photos of deer that let me get strangely close to them.”

Once, while running down Tioronda Avenue, a herd of deer that I had been seeing every day came out into the road and ran with me — they surrounded me and kept pace. It made me think of a remark by the writer Sy Montgomery, who said the tendency to play is a mark of intelligence. When the interviewer remarked that turtles don’t play, Montgomery responded that turtles do play, but that hardly anyone is patient enough to watch turtles that long.

The deer running with and around me on isolated roads is a reflection of the fact that humans, animals and plants are irreversibly entangled with one another. Some of the ways are clear — we warm the atmosphere, deer get sick, deer spread more ticks to us — but many more remain mysterious. As we head into the New Year, it’s helpful to practice a bit of humility. Sometimes it’s best to head into the woods, stop and observe. Although I’ve been there more times than I can count, I always find something going on that I was not aware of.