Authorities arrested a Beacon man after, they said, he admitted to starting the fire that destroyed a three-story house at 925 Wolcott Ave. on Tuesday (Jan. 3), the same day he was due in court for an eviction hearing.

Brian P. Atkinson, 56, was charged with one count of third-degree arson, two counts of first-degree reckless endangerment and two counts of second-degree criminal mischief, all felonies. Police said he walked to the department and turned himself in immediately after starting the fire. He is in custody at the Dutchess County jail in Poughkeepsie and is scheduled for a preliminary hearing at 10 a.m. in Beacon today (Jan. 6). 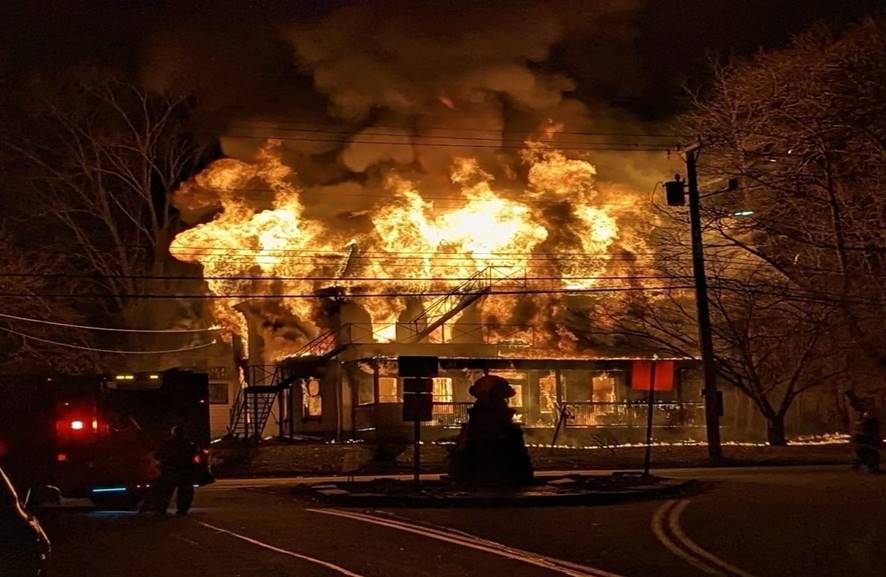 A fire destroyed a three-story house in Beacon on Jan. 3. (Photo by Ed Mendoza)

Beacon police and firefighters responded to the house, which was fully engulfed by flames, at 6:23 a.m. on Tuesday. The house was unoccupied and under construction; police said in a statement that Atkinson is homeless but had formerly been a tenant.

According to court records, Atkinson was scheduled to appear in City Court on Tuesday for eviction proceedings that had been filed against him by the building’s landlord on Dec. 21 for non-payment of rent.

Beacon firefighters remained on the scene for hours to extinguish hot spots before the building was razed by a contractor. No injuries were reported, but two nearby residences — one on Wolcott and another on Sargent Avenue — sustained exterior heat damage.

Firefighters from the Village of Fishkill, Castle Point and Glenham provided assistance, along with Ambulnz, Beacon Volunteer Ambulance, the Dutchess County Sheriff’s Office and MTA police. Rombout and Chelsea firefighters provided standby coverage in the city.