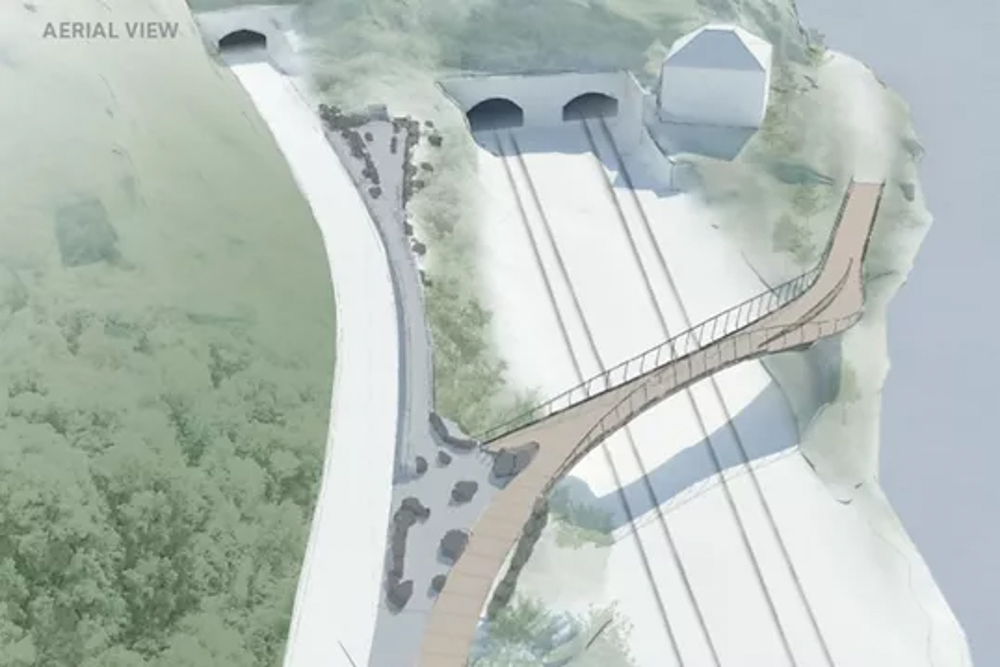 The Breakneck project will include a 445-foot span over the tracks north of the tunnels.

Construction of the Hudson Highlands Fjord Trail’s first phase, which includes two paths and a bridge over the Metro-North tracks, was cleared to begin with a determination by New York State that the project will not have a negative impact on the environment.

The Department of Environmental Conservation announced Dec. 28 that the parks department had issued a “negative declaration” for the Breakneck Connector and Bridge, which combines the 445-foot span over the tracks with a half-mile trail between its north end and Metro-North’s station at Breakneck.

As planned, the whole Hudson Highlands Fjord Trail will encompass 7.5 miles of pathway and amenities running from Dockside Park in Cold Spring through Hudson Highlands State Park and ending at Long Dock Park in Beacon.

Amy Kacala, executive director for Hudson Highlands Fjord Trail Inc., which is overseeing the project, said on Wednesday (Jan. 4) that work on the bridge and connector will begin in the spring with stabilizing and restoring the beginning of the Breakneck Trail.

As part of the first phase, the trailhead will be moved up-slope from Route 9D and its tunnel, with stone stairs added for hikers. “We will formalize some social trails, close others and erect a new hiker orientation station for the trail stewards at the relocated trailhead,” she said.

Construction on most of the bridge and connector will begin late this year, said Kacala, and is to be completed in 2025. During a public hearing in July, Stephen McCorkell, a capital facilities manager with the state parks department, said the bridge would be outfitted with a steel pedestrian barrier, railings at least 8 feet high and mesh to prevent anything from falling on the tracks.

McCorkell also said that the span would need a waiver because it would be about 3 feet lower than the standard. It would be constructed from pre-fabricated sections lifted from a barge anchored in the Hudson River.

One of the trail’s goals is to allow hikers disembarking at the Metro-North stations at Breakneck and Cold Spring to visit the popular hiking destination without using Route 9D, thereby reducing congestion on the busy state route, where passing cars often compete for space with people walking in the roadway.

“These improvements will make good on Hudson Highland Fjord Trail’s promise to improve safety and access at this extremely popular area,” said Kacala.

Along with ferrying hikers and bicyclists across Metro-North’s tracks, the bridge would give New York City’s Department of Environmental Protection vehicles access to a drainage chamber built as part of an underwater pressure tunnel for the Catskill Aqueduct.

The chamber, which sits between Metro-North’s tracks and the river, became landlocked when Route 9D was built in 1932 and is only accessible by trail or boat, Todd West, a planning director with the DEP, said at the public hearing in July.

West also said that the DEP would provide $14 million toward construction of the bridge and connector. Kacala said in July that an additional $20 million would come from the state parks department and the remainder from HHFT.

The rest of the project is undergoing a full environmental review that is expected to be completed later this year. That review, known as a generic environmental impact statement, will include a period of public comment, as well as public hearings.

3 thoughts on “Phase 1 of Fjord Trail Gets OK”