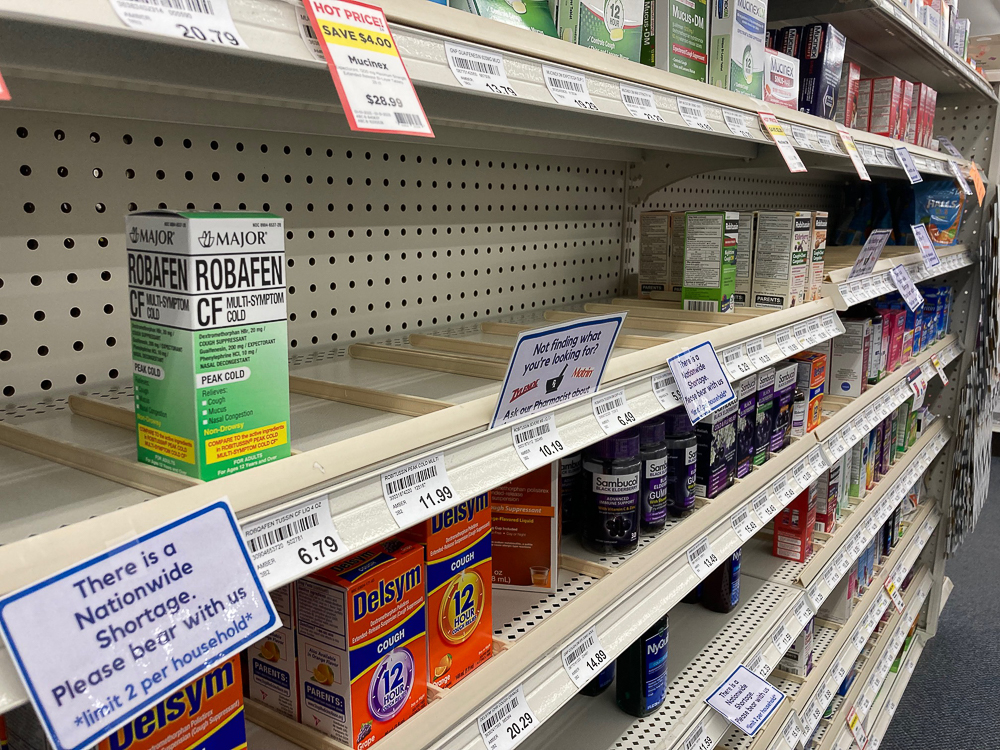 Pharmacies such as Drug World in Cold Spring are struggling to keep shelves stocked with cold and flu medicines amid a spike in cases. (Photo by L. Sparks)

Anyone turning into the aisle where Drug World stocks cold and flu medications and Tylenol will confront a desert.

Shelves that once held rows of remedies sit bare. In place of boxes of Robitussin, Children’s Tylenol and other go-to countermeasures, owner Heidi Snyder and her staff have attached signs warning customers about nationwide shortages and a policy limiting certain items to two-per-shopper.

Beacon Wellness Pharmacy is experiencing a similar squeeze, owner Enrique Reynoso said on Tuesday (Jan. 10). “No Children’s Tylenol. DayQuil is out. NyQuil I have because I was smart enough to buy it when it was in stock.”

Amid a national and statewide outbreak of the flu, along with seasonal colds and the ever-changing variants of COVID-19, relief from symptoms can be hard to come by. Local pharmacies and groceries and retailers are struggling to keep their shelves stocked as high demand outstrips manufacturing capacity, creating shortages.

The U.S. Department of Health and Human Services announced on Dec. 21 that it would allow states to access the federal stockpile of Tamiflu and manufacturers have increased production.

For some items, like liquid Children’s Tylenol, Snyder said she can only get six per day from her supplier. Vicks DayQuil and NyQuil, medicine-cabinet staples, are available but in high demand.

In response, CVS has instituted a two-product limit at its stores and online for children’s pain and fever medicines; Rite Aid is limiting online purchases of 4-ounce grape-flavored Children’s Tylenol to four; and Walgreens has a six-product limit on online purchases. Costco customers can only buy one bottle at a time.

As of Dec. 31, flu cases in Dutchess had nearly tripled from the 2021-22 flu season and in Putnam, nearly doubled. There are still four more months left in the 2022-23 flu season. 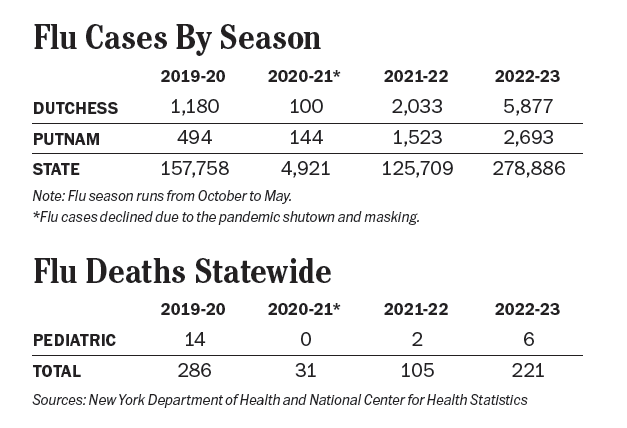 The Consumer Healthcare Products Association (CHPA), which represents companies that make over-the-counter medicines, said on Monday that there is no widespread shortage of children’s pain and fever medications, but an “extraordinary demand,” with November sales 65 percent higher than the same time last year.

Companies are “operating at maximum capacity” to produce between 35 and 50 percent more than in 2021, and looking to make even more medicines by contracting out manufacturing, according to the association.

“As this situation continues to rapidly evolve, CHPA encourages consumers to buy only what they need, so other families can find and purchase the medicines they are seeking,” it said.

Demand may drop as infections recede. In its weekly flu update, the federal Centers for Disease Control and Prevention said on Dec. 31 that while cases remain high, they are declining in most areas. Cases in New York remain “very high,” according to the CDC, but peaked at 52,936 for the week ending Dec. 10. They had fallen to 22,905 for the week ending Dec. 31, according to the state Department of Health.

So far this flu season, there have been at least 22 million cases nationally, 230,000 hospitalizations and 14,000 deaths, including 74 children, according to the CDC. New York had reported six pediatric deaths as of Dec. 31. In 2020-21, with people isolating and wearing masks during the height of the COVID-19 pandemic, there were fewer than 5,000 reported flu cases in New York state, and no pediatric deaths.

Data from the CDC also confirm a retreat in infections caused by respiratory syncytial virus, whose symptoms mirror those of the common cold. New York was among the states that experienced a larger outbreak of infections this year, but cases have fallen dramatically since peaking in mid-November.