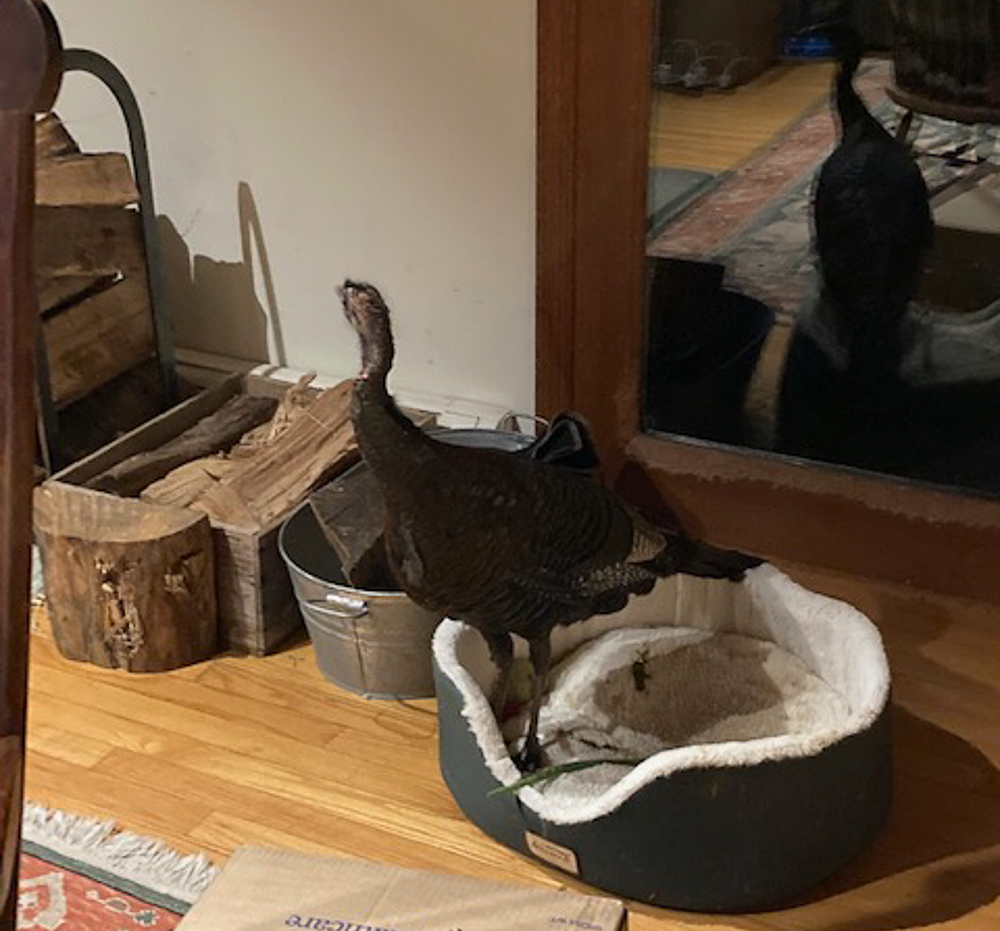 Schonfeld snapped this photo of the turkey before things turned ugly. (Photo provided)

Leaves behind a bloody, filthy mess

On Jan. 6, chiropractor Magda Schonfeld arrived home on South Highland Road in Garrison at 7:30 p.m., after a hard day of work at Hudson Holistic Healthcare in Cold Spring.

The day wasn’t over.

“When I first came in, I noticed all the kitchen throw mats were in disarray,” she recalls. “And there was blood and excrement on the overturned cat bowl.”

There was also a wild animal standing in the small bed that her two cats normally occupy.

“Oh, there’s a wild turkey in my living room!” Schonfeld remembers thinking, before grabbing her cellphone to photograph the uninvited guest.

Somewhat in shock, she sat for a bit.

“The turkey and I looked at each other,” Schonfeld said. “It took about 10 minutes before it registered that I had a problem: It was a big MF turkey!”

She called her neighbor, who immediately came to help, stun gun in hand.

“I didn’t think it was a good idea, but she tased the turkey, which just made it more frantic,” Schonfeld said.

The bird repeatedly flew straight up, hitting its already bleeding head on the ceiling. When Schonfeld moved the cat bed, the turkey shifted to another corner of the living room.

She and her neighbor tried to throw a blanket over the bird, hoping it would have a calming effect.

“That made it more hysterical,” Schonfeld said. “It flew up and hit the ceiling again.” 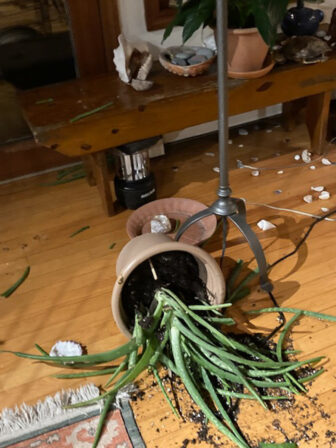 The turkey flew upstairs to the solarium, where it knocked over dozens of plants, breaking pots and spreading soil everywhere.

It then flew downstairs, landing on the kitchen island.

“It was magnificent when it spread its 4-foot wings,” Schonfeld said. “But it knocked everything off the island counter — fruit bowls, glasses, dishes. Everything went flying across the room.”

For a moment, there was a pause in the chaos.

“The turkey and I rested; we sort of got to know each other,” Schonfeld said. “I could see it was not aggressive. It just wanted to get out.”

She still held the blanket, but this time swatted the bird. That approach worked. The turkey started to walk away.

“Maybe it was exhausted from flying up and hitting the ceiling so many times,” Schonfeld said.

As she continued to swat, the turkey strutted down the hallway, through an open door and into the night.

It had been more than an hour since Schonfeld had arrived home.

She and her neighbor assessed the damage. 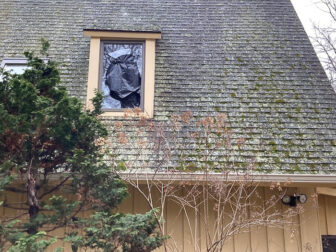 The turkey appears to have entered the home by crashing through an upstairs window.

Upstairs, a window and its screen had been destroyed, littering the bedroom and bathroom floors with broken glass. The solarium was in shambles.

Schonfeld reasoned that the bird had inadvertently gotten into the house when it flew into that closed upstairs window, breaking it and the screen.

Downstairs, the window of a sliding glass door was broken, its shards lying on the deck. The screen was damaged, though not enough for the turkey to escape. The inside of the doorframe was scratched and chewed.

Numerous items in the kitchen had been broken; there was blood and excrement on the island. “I had blood on ceilings and walls, everywhere,” Schonfeld said.

Her cats did not reappear for 24 hours. “They were probably freaked and hid in a closet upstairs,” she said. “When they finally came down, they hadn’t eaten and were starved. They threw up all over the place.” 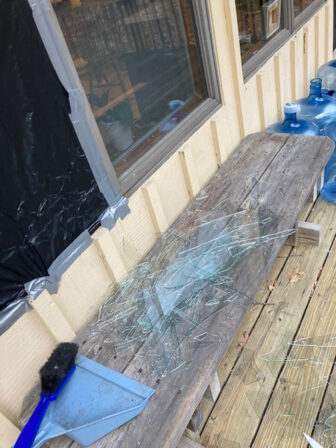 The bird shattered a downstairs window, sending glass onto the deck.

Schonfeld said she didn’t feel bad about the turkey until after the incident. “While it was in here, it was more important just to get it out,” she said. She worries that because the turkey was bleeding when it finally escaped, it likely fell victim to a coyote or other predator.

She is still dealing with her insurance company. The window damage was nearly $2,000, not including replacement screens. Most of the blood washed away, but Schonfeld may consider having the room that suffered the most repainted.

Fortunately, while there was “an awful lot” of broken pottery, dishes, bowls and glasses, nothing of great financial value was destroyed.

“What broke my heart was the beautiful clay teapot my son made me,” she said. “It was smashed.”

In the 28 years she has lived in her house, Schonfeld said she has contended with various creatures that managed to get inside, including snakes, mice, squirrels and small birds, but never a wild turkey.

A flock of 10 wild turkeys had shown up in her neighborhood, “oddly enough on Thanksgiving Day,” Schonfeld said. She photographed them trotting across her yard on the way to her neighbor’s bird feeder.

She suspects the bird that wreaked havoc in her house was part of that flock and had roosted in a tree close to the upstairs window it later shattered.

“When I first saw those turkeys, I thought they were adorable,” Schonfeld said. “They are less adorable to me now.”