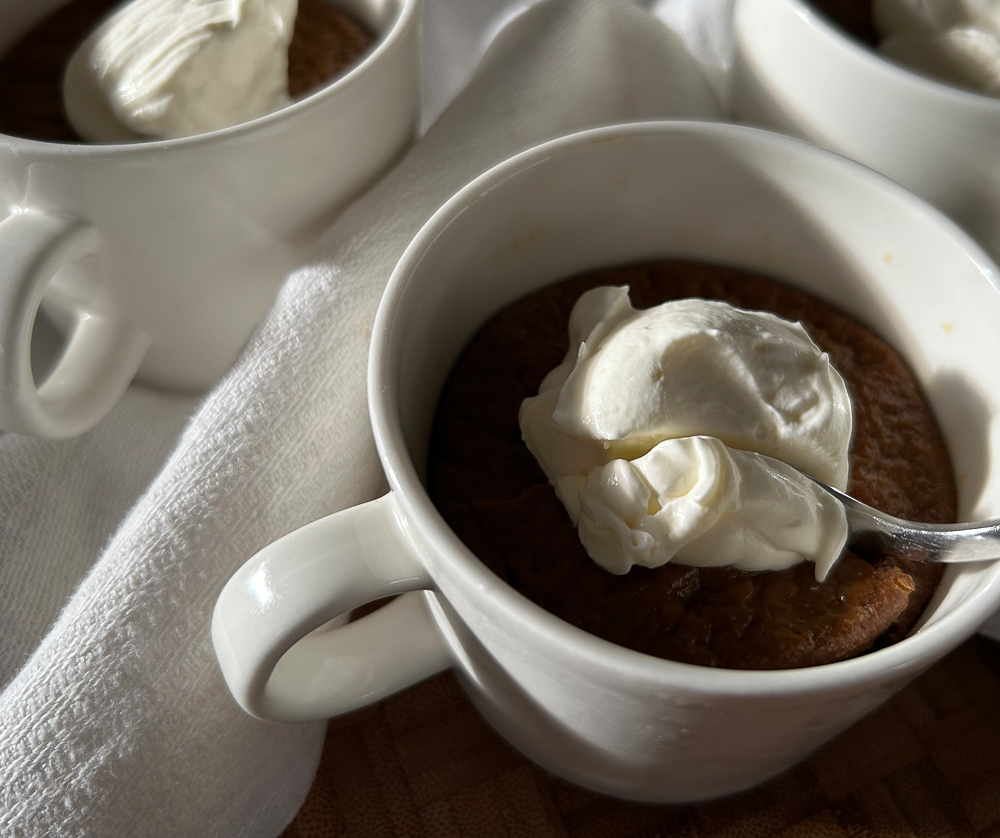 By some twist of fate, no chocolate dessert graced the menu at the restaurant where my husband, Peter, and I dined with a friend last week in Maine. Otherwise, there is zero chance that Peter would have sampled my dessert, a superb Indian pudding. Peter’s like that: If he’s happy with his order, he isn’t motivated to try anyone else’s.

Not me. I like to taste everything, good or bad. For me, half the pleasure in dining out comes from sampling the full range of the kitchen’s talents (or lack thereof). Luckily for my friends, I have trained myself to ask first, before poking my fork into their dishes.

Perhaps that’s how I first encountered Indian pudding as a child, pilfered off someone else’s plate. My family had gone out to eat at a historic inn in Lebanon, Ohio — the kind of place that prided itself on deep-roots traditional American cooking.

This dessert fit the bill. It is one of the first native dishes adopted, then adapted, by the Europeans who swarmed this continent (the spices in it referenced British cooking; the molasses came from the then-Portuguese-controlled West Indies). They are also the ones responsible for giving it its patronizing name, which has stuck despite occasional efforts to rechristen it: “Hasty Pudding” confused cooks as it referred to a whole host of similar dishes, as well as a Harvard social club; “Puritan Pudding,” big surprise, never caught on.

Not so the pudding itself, which quickly gained a passionate following. In 1776, Benjamin Thompson wrote, in his Essay on Food, “however people who have not been accustomed to the American cookery may be prejudiced against it, they will find upon trial that it makes a most excellent dish.”

Some two decades later, poet, diplomat, entrepreneur and public intellectual Joel Barlow wrote an entire 157-line mock-heroic poem in its honor, ending with the line, “To that beloved bowl my spoon by instinct flies.”

Nonetheless, Indian pudding does not sound particularly appealing on a menu, especially a dessert menu, especially to a kid. It is, after all, baked, spiced cornmeal-and-molasses mush. I wonder if that is why I have hidden away my love for this dish for so long. On the rare occasions when it has turned up on a menu, I’ve always ordered it. But I never sang its praises louder than a peep, and I’ve never tried to make it myself. To me, Indian pudding remained a humble, secret affection.

I was not even planning to make it the star of this column. But as I began casting about for a recipe idea, I found myself looking out the window for inspiration. And there it was, undeniable: the big, gray heart of winter, right upon us, eliciting a craving for tea and friends and the kind of small-scale, quiet socializing suitable to chilly days. As I pondered what would go nicely with tea (figuring you already know how to make tea), the Indian pudding from last Friday’s dinner situated itself plunk in the middle of my thoughts, like a barn cat intent on being adopted.

Served with plain whipped cream or crème fraiche, it is a lovely afternoon snack, like a super-moist tea cake. Topped with ice cream, it’s a perfect dessert — just right for sharing.

Note: I made this with Wild Hive Finely Ground Cornmeal, which is grown and milled locally. Using commercial cornmeal may result in a different texture.

Heat the oven to 300 degrees. Butter eight ramekins or a 2-quart covered casserole dish. (You can also use any 2-quart baking pan; simply cover it with foil while baking.) Prepare a water bath: Find a roasting pan large enough to fit your ramekins or baking dish; start a pot of water to boil.

In a medium saucepan over medium heat, warm the milk. Add the cornmeal in a slow stream, whisking constantly, so it doesn’t clump. Bring to a simmer and cook, stirring, for about 10 minutes, or until thick and smooth. Remove from heat and whisk in the cold butter. Add the molasses, brown sugar, spices, salt and vanilla, and mix well.

Beat the eggs well in a small bowl, then add to the cornmeal mixture, mixing quickly to incorporate. Scoop the batter into the prepared baking dish(es), cover with buttered foil or lid, place in the roasting pan and transfer to the oven. Add boiling water to the roasting pan to come about halfway up the sides of the ramekins or casserole. Bake 1½ hours (you may need to replenish the water during baking). Meanwhile, make the topping (optional; recipe below). After 1½ hours, remove pan from oven, carefully lift the foil or lid from the pudding(s) and return to the oven for another 30 to 40 minutes, or until fully set and brown on top.

Remove from oven, lift pudding(s) from water bath and set aside to cool about 20 minutes. Serve warm, topped with ice cream or topping (see recipe below). Puddings can also be refrigerated, covered, for up to five days. Reheat in a 325-degree oven for 20 minutes before serving.

For the topping (optional)

Whisk together the cream and sour cream in a small bowl. Cover with a dish towel and set aside to sit at room temperature for 1 to 2 hours. Stir and transfer to refrigerator until ready to serve. Just before serving, whip until the mixture holds soft peaks. Add the syrup and vanilla, whip briefly and serve.