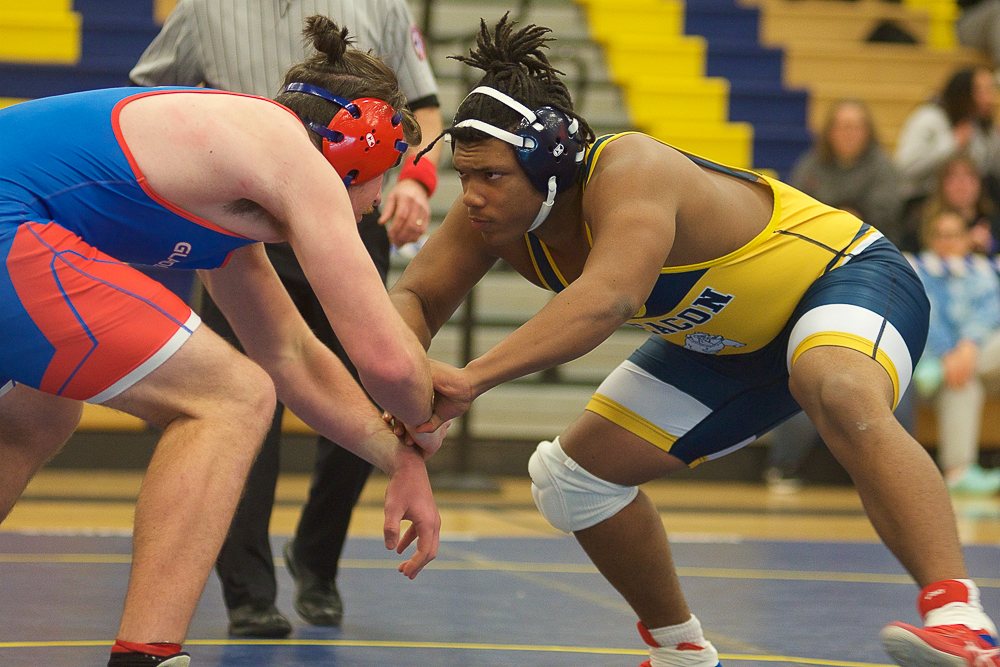 Coach Ron Tompkins and the Beacon wrestling team knew they were in for a tough match on Wednesday (Jan. 18) hosting Goshen, and the Gladiators won in four of the five lightest weight classes before Beacon responded at 160, 189 and 215 pounds.

Unfortunately, that wasn’t enough to complete the comeback, and the Bulldogs fell, 48-27.

Sophomore Brody Timm picked up the most dramatic victory, a 2-0 win at 160 pounds, in a bout that was scoreless entering the third period. Timm improved his season mark to 15-2.

Alex Khalil, a senior wrestling at 189 pounds, pinned his opponent, improving to 13-4. “He wrestled a tight match, and he could have gotten pinned” himself, Tompkins said. “But he came back” to win.

Junior Jayden Calloway earned a win by pin at 215 pounds, improving to 24-2. “Jayden didn’t force anything,” the coach said. “He settled in and took control.”

Sophomore Jude Betancourt came up with a big win at 138 pounds, improving to 11-4. “Jude got himself in some tough situations, and still came out with the win,” Tompkins said.

Ninth-grader Jaiere Newton did well at 145 pounds, but fell to 9-5 for the season. “He wrestled one of the best guys on their team,” Tompkins said. “He gave it all he had, and he’s been improving for us every day.”

The Bulldogs are scheduled to host their own 10-team tournament on Saturday (Jan. 21), starting at 9 a.m. The finals will be held at about 3 p.m.

Beacon took an early hit in a Wednesday game at Cornwall, with the Dragons taking a 25-19 halftime lead. But the Bulldogs responded in the second half, coming back to record a 61-53 win. It was their fifth consecutive victory.

“We got punched in the mouth early,” said Coach Patrick Schetter. “But we showed some mental toughness, which was great to see.”

Darien Gillins led Beacon with 21 points, followed by Joe Battle (14, including 12 in the second half) and Adrian Beato (10).

“Our guards — Beato, Jack Philipbar, Javan Verdile, Wilson Ciccone and Gillins — all played phenomenal defense and kept us in it early,” Schetter said.

On Jan. 12 at home, the Bulldogs defeated Monticello, 61-42, behind 20 points from Dylan Howard. Beacon led by nine at halftime, then scored 19 points in the third quarter to pull away.

Beacon (9-3) is scheduled to visit Port Jervis on Monday (Jan. 23), Cornwall on Wednesday and Haldane on Friday for the annual Battle of the Tunnel game.

Meanwhile, Haldane pulled out what Coach Joe Virgadamo called its best win of the season on Jan. 14, coming from behind to beat Washingtonville, 69-62.

Haldane also won twice more in the past week, defeating Putnam Valley, 51-44, on Jan. 12 after being down by 10 points at halftime, and beating Pawling on Wednesday, 75-34.

Against Pawling, the Blue Devils overwhelmed the Tigers with a 19-2 run to open the game. Matteo Cervone scored 28 points, followed by Matt Nachamkin (12) and Michael Murray (10).

Against Washingtonville, Cervone delivered another 28-point game, and Nachamkin added 13.

Haldane led by 11 at halftime, but Washingtonville went on a 27-14 run in the third, and had a two-point lead to start the fourth quarter. “They were focusing on Matteo, so he found the open guys,” Virgadamo said.

Against Putnam Valley, Ben Bozsik had 15 points, followed by Cervone (14) and Ryan Eng-Wong (13).

Beacon picked up a 44-37 home victory on Tuesday (Jan. 17) over Cornwall behind 22 points from Reilly Landisi. Devyn Kelly added nine and Lila Burke had seven.

“Playing Cornwall is never easy — they’re aggressive on both ends,” said Coach Christina Dahl. “Reilly sparked our offense, Devyn hit some big shots and Lila had a big six points in the fourth.”

On Jan. 13 at home, the Bulldogs rolled past Monticello, 44-19, behind Landisi’s 15 points. Daveya Rodriguez added eight. “Daveya was our catalyst on both ends of the court,” the coach said.

Beacon finished sixth of 40 teams on Jan. 13 at the Suffern Invitational at Rockland Community College on the strength of two performances: Henry Reinke won the 600 meters in 1:26 and Damani Deloatch won the triple jump on his final leap to finish at 43-10.

“Damani had two of the state’s top-ranked triple jumpers ahead of him going into his final jump,” said Coach Jim Henry. “To pull out a personal-best leap on your final jump says a lot about his focus.

“Henry’s 600 was exciting for a different reason,” the coach said. “He’s finally getting back to being the dominant track performer that he was last spring, before being sidelined by an injury. He’s back to 100 percent just in time for championship season.”

Freshman Janaya Fluellen had a personal best in the long jump of 14-0, and Andre Alzate cleared 5-3 in his high-jump debut.

Next up for Beacon is the Section IX divisional on Saturday (Jan. 21) at West Point.

The Blue Devils will travel to The Armory in New York City on Saturday for the U.S. Army Officials Hall of Fame meet.