The pioneer participant, accompanied into the courtroom by Alyssa Carrion and Victor Zamaloff of Mental Health America of Dutchess County, stood before Johnston and answered questions about his counseling and general progress.

Did the counselor talk about triggers to alcohol use,  Johnston asked, before scheduling the next appearance for February. Then Zamaloff rose to add something: The man was enrolled in emergency medical technician school and on the road to becoming a volunteer firefighter.

“Feel free to not be so modest,” Johnston said to the veteran.

Monthly updates like the one taking place at Beacon City Court on Wednesday are one feature of veterans treatment courts, a program created to offer ex-military members charged with misdemeanors or  nonviolent felonies a chance to avoid jail and prison.

Veterans referred to the court and accepted win a deferral of their prosecution but must commit to at least a year of monitoring by judges and address underlying problems such as alcohol and drug addiction, homelessness and joblessness. 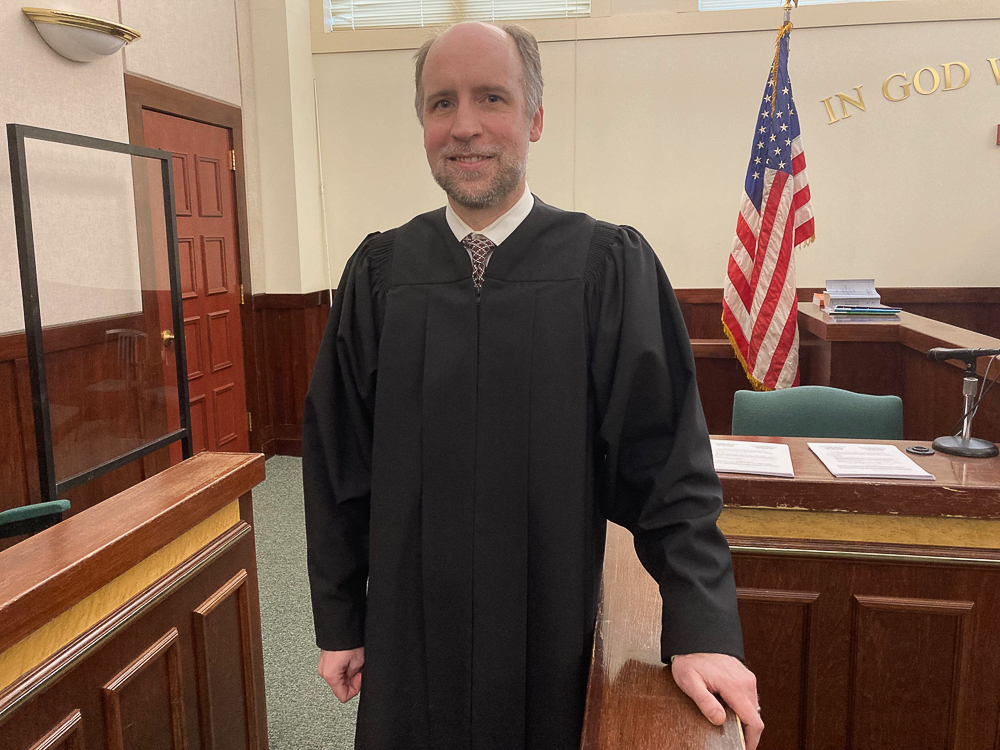 Buffalo created the first court in 2008 and Dutchess in 2022 became the 34th municipality approved for one by the state. Former county judge Peter Forman, who lost his seat to Jessica Segal in 2020, led the effort to get a court for Dutchess.

Participants charged with felonies who agree to the program are monitored by Segal at Dutchess County Court in Poughkeepsie, while Johnston supervises veterans charged with misdemeanors.

Both judges can refuse to accept defendants referred by public defenders and private attorneys, but that rarely happens, said Tammy Bender, the resource coordinator for Dutchess’ veterans court program. (A bill introduced by former Assembly Member Sandy Galef and enacted in 2021 allows ex-service members to have their cases transferred to a county with a veterans court. For example, a veteran being prosecuted in Putnam County, which does not have a court, could ask that his or her case be moved to Dutchess or Westchester.)

In addition to Mental Health America, the federal Veterans Affairs medical centers at Castle Point in Fishkill and at Montrose, just south of Peekskill, are partners.

“I am gratified to see Beacon Recovery Court expanded to focus on those who have served our country,” said Johnston. “It is particularly valuable that the veteran participants are paired with a peer mentor who is well-suited to understand their unique background.”

Carrion understands the difficulty veterans face when they leave the military. The West Point graduate, 40, served five years in active duty and three in the reserves. Carrion said she felt “lost” after ending her military career in 2012.

Veterans are “built a certain way in the military” that is different from civilian life, and others carry trauma from combat duty, said Carrion. She was working in banking, and feeling purposeless, when a job opened up with Vet2Vet, a peer-mentoring program that MHA runs, about three years ago.

Now she manages MHA’s Staff Sergeant Parker Gordon Fox Suicide Prevention Program, named for a U.S. Army veteran who killed himself in 2020 at age 25. The program arranges treatment for suicidal veterans who are not enrolled in the VA health care system and offers therapies in art, horseback riding, music and yoga.

“It’s my people, and being able to help even one veteran get through, survive, make their life better, is just worth it,” said Carrion. “Even on my worst day, it’s better than my best day in banking.”

Zamaloff, 73, joined MHA two years ago after retiring as an emergency medical technician and firefighter for the Arlington Fire Department. As a medic in the U.S. Army from 1970 to 1980, he did not deploy to Vietnam but saw the war’s toll while treating wounded soldiers at Fort Sam Houston in Texas and other military hospitals.

He spends half his time helping veterans find jobs and the rest assisting Carrion as an outreach coordinator for the Staff Sergeant Gordon program.

“We’re here to help them if they need advice, or they need a kick or whatever, just to make sure they’re on the straight and narrow,” said Zamaloff. “You have to do this, this and this, and the end result is not going to jail for a bad decision.”

After the court session ended, Zamaloff and the veteran busied themselves hanging a banner imprinted with the logos of the U.S. military’s six branches. Bender dismantled decorations put up for a drug court graduation.

During the planning for Dutchess County’s veterans courts, there was a debate about whether enough veterans would participate. On Wednesday, Bender spoke with two attorneys about referrals to Segal’s veterans court.

“It’s kind of like, if we build it they will come,” she said. “We did, and we’re starting to get referrals.”