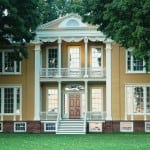 Candles in hand as dusk settled over the Hudson, about 50 people trooped into the apple orchard at Boscobel on Saturday night (Oct. 16) to seek blessings for the trees.
“The reason we’re here is to pray and celebrate” and wish the orchard well, the Rev. Frank Geer, rector of St. Philips Episcopal Church, Garrison, said as the group gathered under the tree chosen for the 2010 ministrations. The attendees sang a Johnny Appleseed-style thanksgiving to God “for giving me the things I need, the sun and the rain and the apple seed”; saluted the tree with “huzzahs,” and watched the tree receive a libation of cider poured on its roots — “Drink Up!” They also recalled lessons learned at previous shindigs, including, as Rev. Geer observed, that “they didn’t grow apples in the Garden of Eden.” Things to note this year included the reality that life moves in cycles, even for apple trees, which can provide abundant crops one fall and taper off the next. “Like this year, they don’t bear quite as much,” Geer said as he stood beneath the honoree tree. 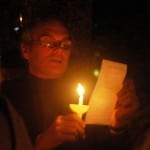 Rev. Frank Geer leads the invocations for the apple tree.

Sponsored by the Friends of Boscobel, the shindig dates back about 15 years at Boscobel and reflects pre-Christian and medieval British traditions. The first invocation, a written wassail, reflected that heritage.

“Wassaile the trees, that they may beare You

Many a Plum and many a Peare.

For more of lesse fruits they will bring,

As you do give them Wassailing.”

When the orchard portion of the festivities ended, everyone wandered back into the mansion meeting hall to imbibe a few libations directly and partake of a potluck repast of meats, pastas, vegetables, side dishes, and more — plus dessert. An ensemble in the corner played Roll Out the Barrel, You Are My Sunshine, and similar old-time selections.
Before the program concluded, Geer and Bill Pugh announced the winners of the cooking and baking contest. Nina Bianco, of River Vale, N.J., took the savory-dish prize for her “Seattle Red Potatoes and Apples.” She later said she had invented the recipe when she decided to see what would happen if she put apples into her potato dish. Other ingredients include butter, olive oil, fresh garlic, rosemary, lemon juice, white wine, and seasoning. And why cook it and then come all the way from New Jersey, Bianco was asked. “The beautiful scenery,” she replied. “We love the house, 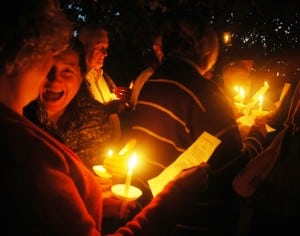 Participants gather beneath an apple tree's branches for the blessing

we love the view, we love the orchard. We love it here!”
The dessert honors went to this reporter, for Scottish Apple Pie, which blends dried cranberries with apples in the filling, uses a butter cookie-like sweet pastry, tops everything with a crumble of brown sugar, butter, flour, and oatmeal, and has been known to include a dash of Scotch whisky, although on Saturday it had cinnamon instead.
A restored mansion, Boscobel is about 1.5 miles south of Cold Spring, on Route 9D.