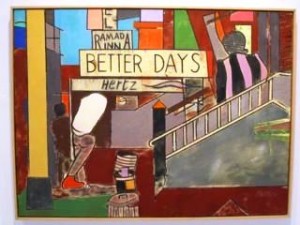 A roomful of color: jazzy cartoonish lively paintings with a strange undercurrent of mixed-up portents.  Another room of portraits of 20th-century artistic figures, with an emphasis on the lines and creases of a face, the bags under the eyes.  Two artists? No, one, Richard Merkin, who not only divided his artwork into different genres, but cut up his professional life into slices seemingly at odds with each other: professor at Rhode Island School of Design (RISDE), NYC man-about-town dandy, and contributing columnist at Vanity Fair, The New Yorker and Gentlemen’s Quarterly.  The two rooms described are the galleries at Garrison Art Center, which is now in the midst of the first posthumous exhibition of Merkin’s works.
Richard Merkin, who passed away just over a year ago, at 70, was a man devoted to both style and the underdog, at times championing both through his work.  In this exhibit, curated by Garrison Art Center board member Steven Evans, images of down-at-the-heels and/or industrial locales vie for attention with character studies of major literary and artistic figures from James Agee to Weegee to Mark Rothko.  Baseball, a passion of Merkin’s gets a nod in several paintings. 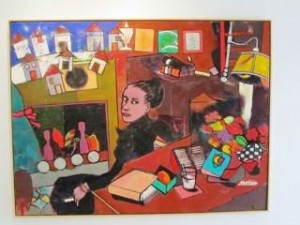 The idea for the exhibition began with Dolores Streibel, the Art Center’s Programs and Events Manager.  A close friend of hers, Victoria Donaldson, was also a close friend of Merkin’s and Donaldson first suggested the possibility of such a show, presenting a catalog of his work to the Art Center’s Gallery Committee.  As the Committee, excited by the catalog and the opportunity to present Merkin’s work, prepared to contact the artist, their first online investigations revealed his obituary — he had passed away just the week before.  Unsure of how to proceed, the Committee asked Donaldson to speak with Merkin’s widow, Heather, who gave the go ahead.
The 30 works on display, carefully selected by Evans (who was familiar with the artist, but did not know him personally) have been loaned to the Art Center by the Carrie Haddad Gallery of Hudson, New York.  An accompanying catalogue features an essay entitled “People He Liked” by Evans, in which he writes, “Primarily associated with a small group of artists based in Britain, identified as The School of London by painter R.B. Kitaj, “¦ Merkin’s base in New York City and Providence “¦ insured his distance from 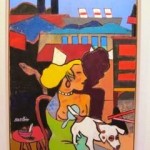 any sporadic and critical success. In both technique and in tone, formally and conceptually, Merkin’s methodology was most closely related to the practice of Kitaj.  In formal terms, both artists employed complex color palettes and made use of a dry-brush technique.  Conceptually, Merkin and Kitaj each constructed complex bodies of work that included layered references to their own intellectual identities: Merkin employed references to mainly twentieth century figures that toyed with and investigated identity”¦” 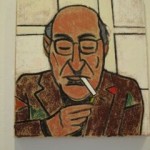 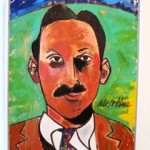 Art Center Executive Director Carinda Swann is pleased to be presenting this exhibition. “He became a distinctive voice in American arts and culture through his New Yorker illustrations and Vanity Fair columns. Now is the time to see his work in an intimate setting, because he definitely has a place in American art.”  The exhibition had a packed opening on Oct. 16, with invitees urged to “come and dress to impress in honor of the life and work of a man known during his lifetime as New York’s premier ‘Artist Dandy.'”  Merkin’s widow Heather flew in from Arizona for the opening.  Swann says that she has been surprised at just how many of Merkin’s former RISDE students have come to view the works.  The exhibition runs through Nov. 14. Gallery hours are Tuesdays through Sundays, 10 a.m. through 5 p.m. For more information visit www.garrisonartcenter.org or phone 845-424-3960.